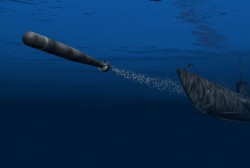 Asymmetry is a very popular word these days and, in my estimation, one applied too frequently to too many things.  Prof. Robert Farley makes the point that asymmetric expectations lie at the foundations of decisions about all battles.  “Combatants engage because they have different expectations about likely outcomes,” he says.  But not every search for gaining advantage in battle is asymmetric.  Using all available means and conditions to throw an opponent out of balance is a core of Liddell Hart’s indirect strategy.  So perhaps returning to symmetry and conceptually focusing on symmetric warfare would help ease understanding of complex problems related to ship roles and design.

Asymmetry is a strategy of weak against strong.  One side has no chance to match its opponent in a blow-for-blow fashion, and instead uses a type of attack for which the stronger opponent has developed ineffective defenses.  This is more of a conceptual framework than anything tied to a particular weapon, and in fact the same weapon can be both asymmetric or symmetric attacks depending on its use.  Torpedoes launched by a destroyer against a battleship constitute asymmetric warfare, but launched against another destroyer screening that battleship becomes symmetric.  PLA Navy anti-access doctrine and capabilities are asymmetric versus the U.S. Navy, but the same capabilities linked to a more Mahanian concept would be symmetric versus JMSD Forces, or overwhelming versus the Vietnamese Navy.  In the last case we would witness a reversal of roles.

Asymmetry is also a transient phenomena.  Use of torpedo boats was seen by Jeune Ecole as an asymmetric strategy aimed at Britain’s Royal Navy and its commerce, but very soon the British were able to control this threat and reinstate the symmetry by creating the destroyer.  The same torpedo, supported by excellent training, was part of an Imperial Japanese Navy asymmetric strategy in night actions against the (locally) numerically superior American counterpart.  Radar soon nullified this concept, although as Capt. Wayne Hughes noted in his Fleet Tactics and Coastal Combat, it took some time for the U.S. Navy to grasp the concept of using the radar, in spite of the fact that it was already technically in service during the battle at Savo Island.

The advantage of conceptually coming back to symmetry as a guiding principle is seen in the way warships were built and designed in the past.  A battleship was supposed to carry offensive weapons able to destroy the battle fleet of an enemy.  At the same time, armor was to give it protection against similar (symmetric) opponents.  In the case of cruisers the story was different, mostly because of Washington Treaty limitations, but the last cruiser designs without such limits returned to the need to fight opponents of the same class.  For modern ships it would be much easier to think in terms of their primary mission, while taking as a rule ability to fight a similar class opponent.

Looking at a contemporary example, the LCS surface warfare mission package’s primary mission is to counter asymmetric threats, like swarm attack, but it lacks capabilities to counter a symmetric opponent like a missile corvette.  My analysis could be viewed as an oversimplification, but could nonetheless help frame part of what should be a rational discourse among people who have no chance get to grips with real-world CONOPS.  I like the way Master Chief Petty Officer Brett F. Ayer explains Offshore Patrol Cutter requirements.