Greetings, and happy post-Independence Day to the CIMSEC crowd. I’m a new member here, having recently left Active Duty for the Navy Reserve and gone to work in the DC area. My active time consisted of a hull swap on two old ships and becoming a plankowner on a new ship, plus training recruits on shore duty. But nowadays I’ve returned to my journalism-major roots as a civilian, and my initial goal for CIMSEC was just to apply those skills with some editing and other behind-the-scenes support for NextWar. Of course, news broke during the holiday period that, naturally, drew attention.

Just before the Fourth of July, the heavy-lift ship Eide Transporter floated off three pieces of valuable cargo in Bahrain – the USS Tempest, Squall and Thunderbolt. The trio joins five PCs already stationed in Bahrain, with two more to come next year.

From the Navy Times: “They’re perfectly suited for what we do,” Capt. Joseph Naman, commander of Bahrain-based Destroyer Squadron 50 serving the 5th Fleet, said during the conference call. “There’s a lot of shallow water out here.”

This demand signal from U.S. Fifth Fleet (and, presumably, Central Command) could be considered a reflection of the actual operational needs of the Navy. Apparently those needs include a large number of shallow-draft yet heavily-armed vessels that match up well with the fleets of local allies. Add upgrades with gyro-stabilized Mark 38s and a Griffin missile system, and you’ve got a capable platform for visual-range engagements against other small combatants. Cost estimates are hard to find, but this one lists the PC class as $31 million apiece. Be generous and add 50 percent, so maybe now we’re talking $45 million.

A question then presents itself. In this time of supposed austerity and fiscal sobriety – in which our Navy is also looking to grow the Fleet – why can’t we build more of these, or something similar? Especially if they fit the mission so well that CENTCOM can’t get enough of them?

For the near term, part of the answer seems to be we’re already building a “small and nimble” craft. Except it brings a draft in excess of 12 feet and not much more weaponry than a PC – and all that for at least ten times the cost. The LCS flight deck is great, but I’m not convinced it’s worth the extra hundreds of millions of dollars. At least, not 55 of them.

Yes, unit costs will come down with further builds. Yes, each version brings a huge flight deck. But cut the cost in half and you can still put five or six PC-equivalents in the water at the same price, reach out and touch more Gulf partners (or allies in any littoral environment), and not incur such huge losses as will occur when the expensive LCS ends up overmatched in a contested environment. The LCS certainly will find some uses out in the Fleet – but when the very mission for which it was designed is already being performed by ships built for a tenth of the cost, can we really justify building more of one and not the other? And building that “other” must happen soon. All but one PC are in excess of their intended service life, and their age is starting to show.

Much credit in this discussion goes to many fine recent articles floating about the blogosphere concerning future Fleet composition. To paraphrase one such Proceedings article which I am not the first to reference, the Navy could do worse than to build some Fords instead of Ferraris.

Matt served as a division officer aboard USS Shiloh (CG-67), USS Chancellorsville (CG-62) and USS Makin Island (LHD-8), and at Recruit Training Command ashore. He is a strategic communications consultant in the Washington, DC, area and is a Navy Reservist. 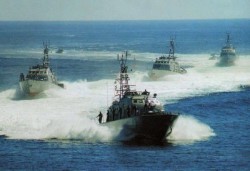