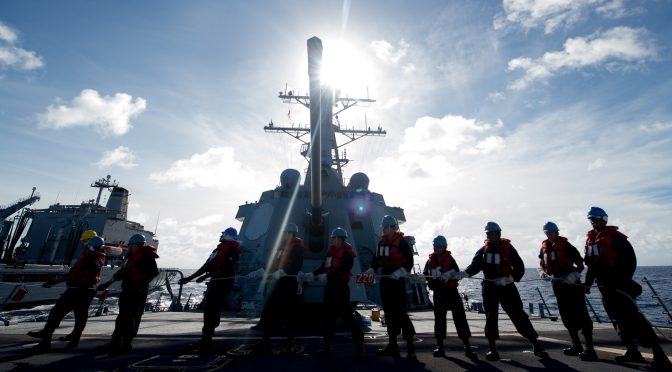 The United States is a continental land power bridging the earth between two mighty oceans. Through our presence at home ports in both the Atlantic and Pacific and forward deployed forces in Asia and Europe we can rapidly project naval power to virtually any spot on the globe. Our naval forces deter threats, support economic growth, maintain global political stability and perform vital counterterrorism missions. These missions are essential to 21st century national security.

Despite the myriad threats that face our nation in this complex and volatile world, it is difficult to build consensus for United States foreign policy. There are some that argue that we should withdraw to our borders and focus solely on our own interests. However, I argue that this instinct denies a fundamental truth of global security; security is achieved through engagement and not through isolation.

As the United States was emerging from its tradition of isolationism in the late nineteenth century, President Theodore Roosevelt, himself a former Assistant Secretary of the Navy, viewed the Navy as the big stick of American foreign policy. President Roosevelt recognized the ascendancy of America on the world stage and saw the Navy as an effective instrument through which we could visibly demonstrate our commitment to peace, protection, and prosperity.

If war is diplomacy by other means, then the intelligent, strategic use of naval power is a key instrument for both deterrence and war fighting. The presence of the U.S. Navy off a hostile coastline visibly demonstrates national resolve and, through their presence alone, may prevent future hostile attacks against the U.S. or its allies. Through its ability to launch operations with aviation assets and cruise missiles the Navy can strike deep and with lethal force into hostile territory without the need to commit ground troops to a protracted conflict.

90 percent of world trade travels via the seas.  Maintaining safe passage for international trade is in the vital economic interest of the United States and its allies. International Waters or the High Sea is defined by the United Nations Convention on the Law of the Sea as “all parts of the sea that are not included in the exclusive economic zone, in the territorial sea or in the internal waters of a State.” The treaty also says “The exclusive economic zone shall not extend beyond 200 nautical miles.” To simplify, international waters are all waters that are 200 nautical miles outside a country’s exclusive economic zone. By maintaining a constant presence in the world’s shipping lanes, the United States Navy plays a critical role in ensuring free trade throughout the world.

I was born 18 months before the events of September 11, 2001. Like me, every member of my generation has no memory of life before September 11. The global war on terror was a constant presence in our collective consciousness and will continue to shape the world in which we take our place as adults. Maintaining a strong Navy is imperative for the continued economic and military security of the United States in the 21st century. The Navy’s abilities to project force, apply lethal force and deter threats are essential to the maintenance and protection of vital U.S. interests throughout the world.

Matthew Lidz is from Basking Ridge, New Jersey. He is currently a freshman at the University of Richmond