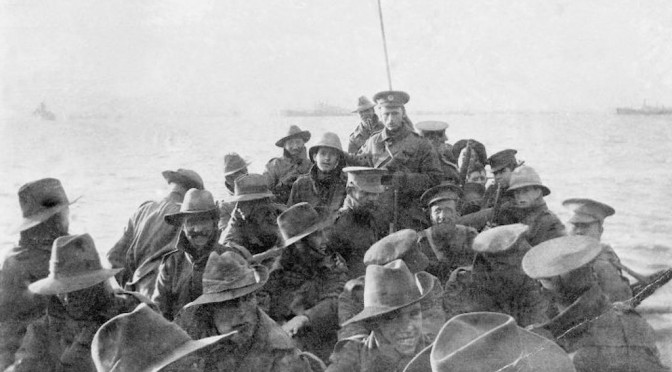 The following book review is by guest author Shane Halton.

When writing about World War I, it can be difficult to strike the correct philosophical balance. Make the story too bleak or nihilistic and you risk misunderstanding the very real patriotic enthusiasm that characterized the first months of the War. Conversely, one can’t make the story too romantic and heroic at the risk of ignoring the fact that most of World War I was a brutal slog with moments of individual gallantry, often overwhelmed by pointless slaughter exacerbated by terrible generalship.

World War I had so many different facets that it can be hard to meld the stories of political scheming in London, Berlin, and Constantinople with the existential drama of soldiers clinging to their lives in trenches under constant enemy fire while waiting for the order to ‘fix bayonets’ and go over the top. Simply put, most stories of World War I don’t scale well: they work best as individual stories (depending on your temperament I recommend either Storm of Steel or the equally classic All Quiet on the Western Front) or sweeping grand histories (my favorite one volume is the comparably slim The World Undone or Robert Massie’s Dreadnaught and Castles of Steel combination for the nautically inclined). Rarely does a history come along that can fuse the two genres. That’s why Peter Fitzsimons’ masterful new volume Gallipoli is such a treat.

The task of the Allies at Gallipoli was truly Sisyphean. They held the low ground: thin trenches carved into the sides of steep cliffs, downhill from the Turkish trenches, exposed to artillery fire. A few times a month they were

directed to fix bayonets and, often in the cover of darkness and always over terrain with minimal cover, take the hill and break the Turkish lines. It was an impossible task. After over a year of grinding attrition from disease and enemy fire, the Allied troops were withdrawn in secret, in good order and with no casualties. The Gallipoli peninsula was ceded to the Turks.

How did it all go so wrong? Despite opting to spend most of the book with the ANZAC (Australian and New Zealand Army Corps) troops in the trenches, Fitzsimons does an admirable job decoding the mix of over-optimism, managerial muddle, and lack of appreciation for local conditions that combined to make an Allied amphibious landing in Gallipoli seem like such a good idea… at least to those sitting in London. A young and manic Winston Churchill, then First Lord of the Admiralty, speed walks through Whitehall, obsessed with finding a way to use the Royal Navy to end the grinding stalemate on the Western Front. His genius brainwave? Send a flotilla of minesweepers and battleships up the Dardanelles and onward to Constantinople to scare the Turks into surrender. Had that plan worked it would have stood as history’s grandest example of gunboat diplomacy.

But the plan didn’t work. The Ottomans and their German advisors mustered just enough of a defensive effort, using a combination of minefields and artillery, to drive back the minesweepers and batter the fleet. Churchill was forced back to the drawing board, eventually convincing the Army to support the Naval force with an amphibious landing on the Gallipoli peninsula. The previously all-Navy operation thus

became a joint Army-Navy invasion. Until the following year’s Allied withdrawal from the peninsula, the Army was to take the brunt of the punishment, with the Navy providing mainly logistical support and transport with the occasional desultory gunfire support to ground operations.

What redeems the story of this quagmire is the piss, vinegar, and rude good humor of the ANZAC soldier as he departs home for the first time, trains for combat in Egypt under the nose of the Sphynx, disembarks on the coast of the Peninsula during the cold predawn hours, and scrambles up the hill again and again as Allied fortunes slowly dwindle and the bodies of his friends pile up around him. Though the story has many individual heroes on both sides (Fitzsimons has a deep respect for the tenacious Turks, enduring stoically in conditions at least as poor as those of the Allies), it is the archetype of the ANZAC soldier that shines through most brightly.

The first third of book covers the transportation and training of the ANZACs and culminates in the shock of their initial (opposed) landings. It reads like a nineteenth century boy’s adventure novel. Everything is bustle and forward motion; the world outside Australia is crammed with dangerous and seductive wonders. The reader is invited to stand among the troops and stare in awe as their transport ships glide quietly up the Suez Canal at night. Later, as the ANZACs train and assemble for the invasion in Alexandria, the story briefly becomes a cautionary tale about the dangers of allowing relatively well paid young soldiers unfettered access to Egypt’s renowned brothels. Letting the reader get to know and love the jovial ANZACs before hurling them on the beaches of Gallipoli is a painful and effective way of keeping one glued in through the rest of the often grueling narrative.

One of the reasons that Fitzsimons succeeds in capturing the huge scale of the landings and subsequent battles while never losing sight of the plight of the common soldier is that Gallipoli itself is just the right size. Most important locations are a single hill, valley, or inlet. The enemy is always very close, the sounds of shrapnel and thud of artillery create a hellish sonic micro-climate, and the freshly dug cemeteries are never far off. The scenes feel both intimate and comprehensive, in a way that histories of Somme or Verdun can never be.

This text is recommended for readers who want to understand why such a massive undertaking seemed so poorly thought through and how victory was almost snatched from the jaws of defeat by the unyielding heroism of the average ANZAC. Read it to renew your appreciation for the military genius and iron willpower of the Ottoman commander, Mustafa Kemal – a figure whose obvious talent and ambition mark him out for even greater deeds after the War. Read it because it’s a crackling good yarn and a minor masterpiece of the genre.

Lieutenant Junior Grade Halton is assigned to the Joint Improvised Threat Defeat Agency. He served as an enlisted intelligence specialist before commissioning as an Intelligence Officer through the STA-21 program. He has written about cyber security and the effects of big data on intelligence analysis for Proceedings magazine. The views above are the authors and do not represent those of the US Navy or the US Department of Defense.