“Because the rules are the only thing we’ve got!”

But Jack was shouting against him.

He gave a wild whoop and leapt down to the pale sand. At once the platform was full of noise and excitement, scramblings, screams and laughter. The assembly shredded away and became a discursive and random scatter from the palms to the water and away along the beach, beyond night-sight. Ralph found his cheek touching the conch and took it from Piggy.

The sound of mock hunting, hysterical laughter and real terror came from the beach.

Piggy was so close that Ralph could see the glint of his one glass.

Ralph answered in the cautious voice of one who rehearses a theorem.

“If I blow the conch and they don’t come back; then we’ve had it. We shan’t keep the fire going. We’ll be like animals. We’ll never be rescued.”

From the Suez Crisis to Libya, the United States has held the Conch. Whether America has been early or late, right or wrong, both enemy and ally have heeded America’s call to tend to the fires of security, stability, and justice. Syria has indeed broken the rules and run off in a fit of mayhem. However, we should be wary of blowing the Conch in Syria if we are unwilling to exceed half-steps; we risk undermining our own military/political credibility and revealing the thinning nature of our global leadership. 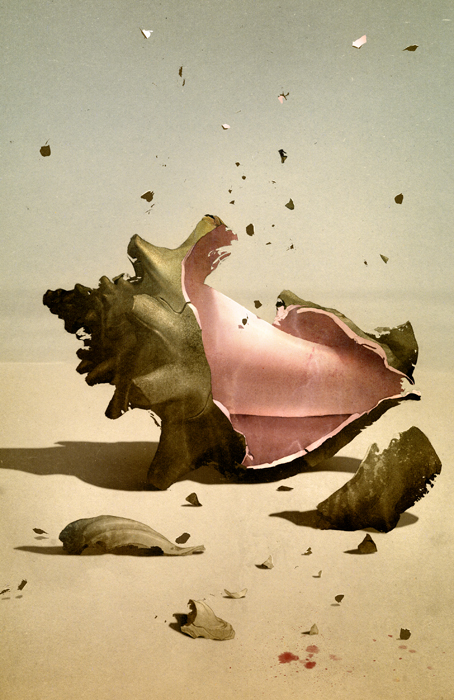 If the Conch is to have any authority, it must have a very clear effect. In Lord of the Flies, Ralph knows well that if the Conch is blown and no one comes, it loses its authority.

When asked by Senator Robert Corker (R-Tenn) what our military operations were seeking, the answer from General Martin Dempsey, Chairman of the Joint Chiefs of Staff (CJCS) was also that of the at-large observers of U.S. policy: “I can’t answer that, what we’re seeking.” To be fair to the CJCS, at multiple points he, DoD Secretary Chuck Hagel, and DoS Secretary John Kerry state that the U.S.’s goal is to degrade and deter the Assad regime’s ability to deploy chemical weapons. That said, there was a continuing disconnect between the stated goal of overall U.S. strategy and the stated goal of the strikes and a disconcerting attempt to disconnect the two. Senator Ron Johnson (R-WI) brought up, and was affirmed by Secretary Kerry, that the administration’s overall goal is aiding the opposition. However, it was clearly noted that the strikes were to be separated from that goal; “The action, if it is authorized… that the consequence of degrading his chemical capacity inevitably will also have downstream impact on his military capacity” (Secretary Kerry) but not in such a way as to significantly shift the balance of the conflict. That conflict being Assad’s main concern, if we don’t mount a larger threat than the opposition, the conch becomes mere background noise.

It is a confusing and round-about series of objectives we are laying out for ourselves, talking about “tailored” strikes in a very un-tailored conflict towards goals disassociated with the main thrust of U.S. policy towards targets not directly associated with the WMD operations we’re concerned about. Overall, the entire enterprise seems to be a muddle. The U.S. will likely avoid striking the actual chemical weapons because of concerns that we’ll inadvertently release those weapons into populated areas where depots are located. The way the plan is beginning to shape up to the public, the best way to describe it is a story about Milton Friedman…

“At one of our dinners, Milton recalled traveling to an Asian country in the 1960s and visiting a worksite where a new canal was being built. He was shocked to see that, instead of modern tractors and earth movers, the workers had shovels. He asked why there were so few machines. The government bureaucrat explained: “You don’t understand. This is a jobs program.” To which Milton replied: “Oh, I thought you were trying to build a canal. If it’s jobs you want, then you should give these workers spoons, not shovels.”

-Stephen Moore’s Missing Milton: Who Will Speak for Free Markets?

A middle policy consisting of operations meant to “shake things up” or in the words of Senator Rand Paul (R-KY), “not win” is a waste. It shows that those who use WMD need only survive a tepid response. We have no room for an action program, only results.The US has two real options:

1. Blow Conch, Beat Jack to a Pulp: Commit to a robust response to severely degrade the Assad’s regime’s ability to conduct the war against the opposition, in such a way that the US’s increased involvement is clearly the result of Assad’s WMD use. This is a clear sign to the regime, and to the world, that use of WMD will have severe consequences with severe impacts. It does embroil us further into the conflict and may aid parties we do not wish, but at the very least it has the stated effect of setting a global precedent that use of WMD will not be accepted and will have consequences of consequence.

2. No Strikes, Just Save the Survivors: It’s guilt-inducing and feels unsatisfactory but the conflict is too big and too messy for half measures that might feel judicious. If Assad walks away from a military strike by the world’s last remaining superpower with the continued ability to survive the onslaught of a legion of rebels, how much weaker does the US appear? The world recognizes that both sides are corrupted in the extreme in Syria, and a failure to act against internal use of chemical weapons in a conflict already defined by endless atrocity and will likely not encourage nations to develop WMD as some administration strategists suggest. The Assad regime already found itself looking down a smoking barrel of sanctions and isolation. With pre-existance serving as the only precedent that saves Assad from a strike for merely having weapons, his battle with the US’s enemies serves as his only defense now. No nation would want to pay that protection fee for chemical weapon employment, namely turning their borders into the walls of a blood-soaked charnal house. In that particular case, there is a sad, but real difference set by the precedent by internal atrocities in a no-good-side civil war and the use of chemical weapons on foreign states. The best help the US can provide is to serve in every way it can to aid who have left Syria and those trying to leave.

Lord of the Flies ended in death and disaster, as a conflict spiraled wildly out of control. I’ve before voiced my grave concern at the idea of getting involved in Syria, based on the fact there is virtually nothing left of the original moderate “just looking to go to work without getting shot or sent to a secret prison” crowd of normal righteously angry people. During the hearing, Secretary Kerry said:

And General Dempsey followed with:

Syria historically has been secular, and the vast majority of Syrians, I believe, want to remain secular. It’s — it’s our judgment that — and the judgment of our good friends who actually know a lot of this in many ways better than we do because it’s their region, their neighborhood — I’m talking about the Saudis, the Emirates, the Qataris, the Turks, the Jordanians — they all believe that if you could have a fairly rapid transition, the secular component of Syria will re-emerge

It’s doubtful the political landscape has changed significantly since AQ funding and foreign fighters began overwhelming reasonable agendas and arsenals, but what a blessing it would be if it has. In the words of General Patton, “Take calculated risks. That is quite different from being rash.” Syria still feels like the latter.