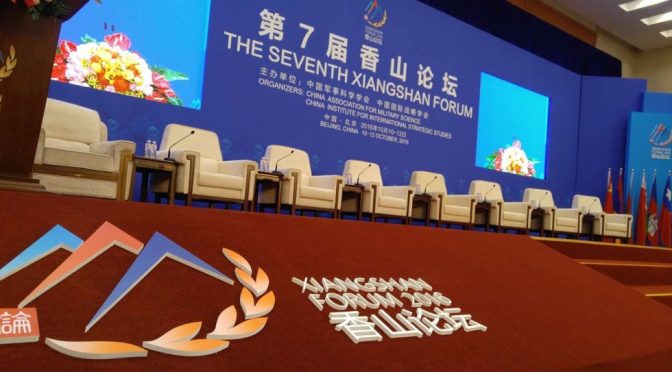 Earlier this year, the author published an analysis comparing and contrasting the 2017 and 2018 Shangri-La Dialogues (SLD) in terms of Chinese themes, narratives, responses, and outcomes; and more importantly, surmising what message Beijing was trying to convey and assessing what the message portends for the United States, the Indo-Pacific, and the world.

The author posited that Beijing views the SLD as a confrontational international forum used by Washington and its allies to unfairly criticize (and contain) China. But despite the critiques, Beijing may also see some value, but not the overwhelming need, to participate in these multilateral dialogues and perhaps begrudgingly accept criticism in these forums as a natural outgrowth and accepted cost of its rise as a global power.

That said, Beijing may one day conclude with respect to opportunity cost that the juice may not be worth the squeeze. Why bother with the seemingly biased and fading SLD when it can focus instead on building up its own Xiangshan Forum (XF)? The regional forum is widely regarded in Beijing as an increasingly viable and desirable counter to the SLD. The forum can function as the security component to the ambitious and expansive Belt and Road Initiative (BRI), and more significantly, an integral part of a strategic agenda (the Chinese Dream) to displace the extant Western-oriented world order with one lacking dominant U.S. influence. If so, one can expect soon a resurgent, revitalized, and revamped XF after an unexpected and self-imposed one-year hiatus. The decision to temporarily suspend the XF is not clear. If indeed Beijing did decide to use the XF in the aforementioned manner, then the pause may be a deliberate structural reset to re-orient itself to a new role.

None had to wait long. On 30 August, the Chinese Defense Ministry announced that the China Association for Military Science and the China Institute for International Strategic Studies  will co-host the 8th Beijing Xiangshan Forum (BXF) in Beijing from 24-28 October, 2018. Therefore, it is useful to examine the “restated” goals and objectives and discuss what it may mean for America, the region, and the international community.

The theme of this year’s forum is “building a new-type of security and partnership featuring equality, mutual trust, and win-win cooperation.” Participants include defense authorities, military leaders, representatives of international organizations, former military and civilian officials, and scholars from 79 countries. They will meet and discuss ideas for new approaches to international security governance, terrorism threats and countermeasures, prospects for maritime security cooperation, and United Nations peacekeeping operations. Participants will also exchange perspectives during various special sessions and panels on the new dynamics in Northeast Asian security, ways and means of addressing the security issues in the Middle East, military and security confidence-building measures in the Asia-Pacific, and artificial intelligence and the conduct of warfare. Beijing hopes the forum will “further strengthen strategic dialogue and communications, accumulate consensus, deepen practical cooperation, and find ways to jointly respond to global challenges and jointly maintain peace and stability.”

The theme of the previous 7th Xiangshan Forum held 11-13 October, 2016 was “building a new type of international relations through security dialogue and cooperation.” Participants from around 60 countries discussed the role of militaries in global governance, responses to new security challenges in the Asia-Pacific through cooperation, including maritime security cooperation, and counterterrorism policy. Additional panel discussions included major power relations and global strategic structure, globalization versus deglobalization and the implications for international security, latest developments in terrorism and creative approaches to cooperation, and maritime crisis management and regional stability. Beijing had hoped the forum would “strengthen mutual trust, accumulate consensus, promote regional security cooperation, and jointly maintain regional peace and stability.”

All in all, the language and tone of this new forum is more assertive and forward-leaning than previous forums – reflective of a more confident and insistent China, who seems determined to move forward from Mao’s revolutionary legacy and Deng’s iconic dictum of “hide our capacities and bide our time, be good at maintaining a low profile, and never ever claim leadership” and now to promote abroad “socialism with Chinese characteristics in a new era (Xi’s Thoughts).” The plenary and special session topics underscore Beijing’s aspiration to be a respected global leader who has a say (and sway) in world events and issues, and perhaps lay the groundwork to eventually displace the extant Western-oriented world order with one without dominant U.S. influence in accordance with its strategic plan for national rejuvenation. If so, the forum is a convenient and opportune platform to offer developing countries an alternative economic and political choice of Chinese “benevolent” governance involving mutual friendship but not encumbering alliances (economic development with supposed political independence). In other words, developing countries in Africa, Central Asia, South Pacific, and South/Central Americas should take heed and carefully consider the Chinese model – a rising power and growing economic juggernaut that feels it does not have to make political accommodations to others.

Of note is the last panel topic on artificial intelligence. There has been plenty of reporting on robust Chinese investment in this emerging technology, particularly in the area of military applications. Some have even speculated that China has already surpassed the United States, and strongly urge Washington to make up for lost ground. If so, could this be Beijing trying to allay these growing concerns? China may be attempting to get ahead of the strategic issue by shaping and influencing international legal frameworks and accepted norms of behavior on the future development, deployment, and employment of artificial intelligence capabilities.

The BRI – Beijing’s trillion-dollar, transcontinental infrastructure enterprise to elevate Chinese global economic and political standing – needs an accompanying and complementary security framework with Chinese characteristics to guarantee the BRI’s continued expansion and future sustainment. The BXF is that security framework. The forum and the BRI (with its hidden nationalist agenda and subdued geo-strategic implications) promote and advance a new global political, economic, and security order under Beijing’s terms. Together, they constitute a new Chinese strategic approach that calls for the balanced integration of interests. These include long-term overseas economic development and concurrent domestic security reforms intended to safeguard and enhance the internal apparatuses of China’s socialist and authoritarian system until it can be the center of that new Beijing-oriented global order.

Hence, in the coming years, expect China to subtly undermine the SLD while incrementally building up the revamped BXF as evident by the new competing theme to that of the extant SLD’s theme of “building confidence and fostering practical security cooperation by facilitating easy communication and fruitful contact among the region’s most important defense and security policymakers.” The scope, nature, and extent of China’s present participation in the SLD can best be summed up as taking the middle road (hedging). Beijing wants to respond to any policy criticism and challenge any narrative counter to their own at the forum, but does not want to openly endorse or promote the SLD. Beijing seems content for now to send a relatively lower rank delegation head to the SLD, limit its role in the special session, and reserve the right to speak at the higher visibility plenary session when warranted (only individuals of full ministerial rank can speak in plenary).

This hedging posture may transform over time to more of a balancing one that will directly challenge the SLD for regional preeminence. If so, Beijing will slowly draw down its participation in the SLD, while subtlety pulling away the other participants through a calibrated program of incentive (carrot) and intimidation (stick). First to go will be the regional countries already in China’s growing sphere of influence (Laos, Cambodia), and then other countries within region and the world, possibly similar to how Beijing picks off countries that formally recognize Taipei. Those that are contemplating withdrawal from the SLD may face increasingly forceful political and economic persuasion (coercion) to do so as part of a pressure campaign, while those that will continue to participate in the SLD will receive growing political and economic backlash as part of a retribution campaign. Countries saddled with BRI-related debts will face the most risk, and in time they may be given a stark binary choice – bend toward Beijing’s will or face economic consequences.

Beijing may also establish its own version of the Rim of the Pacific (RIMPAC) exercise to further advance the security component of the BRI. China and the 10 Association of Southeast Asian Nations (ASEAN) members states held the first-ever ASEAN-China Maritime Exercise (table-top) in Singapore on 2 August, with plans to hold a follow-on field exercise in China involving navies from all the participating countries later in October. If successful, Beijing may make this a recurring exercise and gradually expand its scope, nature, and extent of the exercise to eventually rival that of RIMPAC.

At the end of the day, the strategic conundrum for the United States will be whether or not to participate in the BXF if invited by China. There are two schools of thought on this matter.

Those in favor may argue non-participation would be a miscalculation. By not participating in the BXF, Washington would cede the strategic narrative and initiative to Beijing. Specifically, the United States would yield to China and like-minded nations a public platform to stake out their strategic positions unchallenged; and lose an opportunity to counter Chinese strategic messaging and further encourage China to become a more responsible global stakeholder that contributes positively to the international system.

Those not in favor may suggest that in the early years of the BRI, Washington policymakers faced political and economic pressures to join the ambitious Chinese infrastructure project over the worrying prospect of being left behind. Contrary to conventional wisdom at that time, the U.S. government resisted the clarion call and chose not to join. In hindsight, the decision was the correct call given the political and economic difficulties that have emerged from the project. The same logic and rationale should be applied to the BXF. Resist the strong temptation to join in the false hope of changing  or reforming the BXF from within, and instead challenge the forum by continuing to offer countries an alternative security framework (such as the SLD) to accompany the Free and Open Indo-Pacific (FOIP) economic strategy.

In terms of great power relations Beijing views itself as a destined rising power and Washington as an inevitable declining power. And both are seen as being interlocked in a strategic competition for regional and global preeminence. In this competition the Chinese BRI and BXF and its opposing counterparts – the FOIP and SLD – are the preeminent and enduring platforms in these contested economic and security battlespaces, respectively. The victor of this great power competition will determine not only the future course of the Indo-Pacific, but perhaps also the world.

Tuan Pham is widely published in national security affairs and international relations. The views expressed therein are his own.