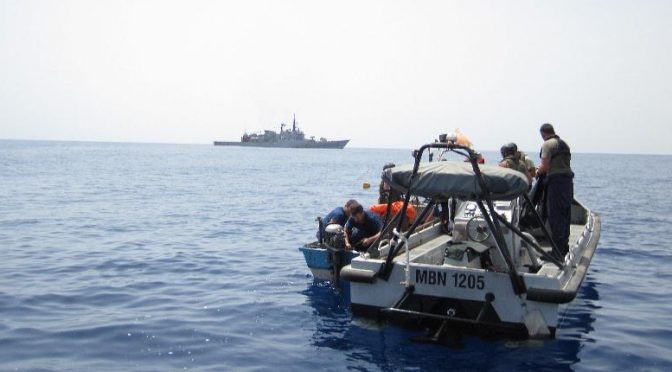 Maritime security challenges have received increasing attention in Europe in recent years. In 2014, the Council of the European Union adopted the first EU Maritime Security Strategy which includes a comprehensive definition of maritime security from a European standpoint. The EU understands it “as a state of affairs of the global maritime domain, in which international law and national law are enforced, freedom of navigation is guaranteed and citizens, infrastructure, transport, the environment and marine resources are protected.” In short, maritime security comprises much more than the traditional questions related to seapower and naval strategies.

Furthermore, the document underlines the EU’s capacity to engage with other organizations such as the African Union which “has a direct impact on its ability to safeguard its interests and to strengthen regional and international maritime security.” Africa matters, not only because of migrants boarding rickety boats in Libya to embark on a dangerous trip to Europe. At the same time, European and African governments often have different agendas, underlined by the many challenges to maritime security emanating from the African coastline.

Narrow Focus in the Indian Ocean

Counter-piracy operations in the Indian Ocean are a perfect example of a maritime security challenge. When attacks by Somalia-based groups became a major worry for the shipping industry, the international community quickly reacted. The EU launched its ‘Operation Atalanta’ in 2008, complemented by other task forces from various NATO countries and other countries like Japan and China, who deployed independently of the task forces.

The question of whether attacks by Somali pirates really justified the large-scale military response is open for debate. Nevertheless, European involvement in the fight against the perceived threat on one of the world’s busiest shipping routes underlined the importance of maritime trade routes for the continent. Almost without warning, European maritime security was suddenly threatened by men armed with AK-47s and RPGs in small skiffs rather than more traditional scenarios that military planners had always imagined.

From a European perspective, the naval response to this non-traditional threat has been largely successful. Even though military officers and shipping industry representatives agree that the threat remains dormant and could resurface in the future, the number of attacks by Somali pirates dropped significantly within a short time. That success was made possible by unprecedented cooperation between naval forces and the shipping industry, as well as self-protection measures of merchant vessels, including the use of privately contracted armed security personnel. At the same time, the EU and other international organizations were heavily involved in capacity-building on land in Somalia.

Successful counter-piracy operations notwithstanding, maritime security in the Indian Ocean region has not been strengthened by a narrow focus during these operations. Whether through the EU or on a bilateral basis, European governments would have the capacities to provide assistance for sustainable projects in African countries. New European-built infrastructure, however, has not been linked to existing organizational structures, namely to the regional economic communities (RECs). Cooperation with security agencies in East Africa has also been limited. As a retired admiral from a NATO nation put it, “We have talked a lot about the region since our navies started operating in the Indian Ocean, but we have not talked a lot with people from the region.”

Failed integration of the RECs is arguably the most notable problem for the long-term sustainability of regional maritime security capacities. These organizations are the cornerstone for peace and security on the African continent. While ambitious plans for the African Peace and Security Architecture have not materialized yet, strengthening capacities within existing organisations would certainly be more sustainable than creating parallel structures in the context of counter-piracy operations.

Somali piracy has never been high on the agenda of governments in East Africa. Attention for maritime topics in general remains limited but problems such as smuggling of drugs and weapons, the illegal wildlife trade or illegal, unreported, and unregulated (IUU) fishing are a much higher priority. In some countries, notably in Mozambique and Tanzania, security for the fledgling offshore gas industry is another important issue. European partners would be well-advised to take these priorities into consideration.

West Africa is another region where piracy has been the most headline-grabbing maritime security problem in recent years.i From a European point of view, these attacks are less of a threat since they do not take place close to a major international shipping route. Nevertheless, the EU became involved, underlined by the ‘Strategy on the Gulf of Guinea’ and the ‘Gulf of Guinea Action Plan 2015-2020.’ Both documents highlight the EU’s strategic objectives in West Africa: a common understanding of threats, support for multi-agency institutions in the region, strengthened cooperation structures, and above all, the development of prosperous economies.

Practical measures, however, have been extremely limited. In October 2016, the Gulf of Guinea Inter-regional Network (GoGIN) was launched, a four-year, €9.3m project supported by the EU and the government of Denmark. The aim of the project is the allocation of funds to regional or national endeavors to promote maritime security and combat piracy. Like CRIMGO, its predecessor project, GoGIN will be implemented by Expertise France, the French development agency. The agency undoubtedly possesses a lot of regional knowledge in West Africa but it is also a vital tool for the French government to secure political influence, particularly in francophone countries.

Capacity building in West Africa does not have to include large-scale financial commitments by partners from Europe or elsewhere. Similar to East Africa, however, it requires a focus on regional priorities to be sustainable. In the past, European involvement in the provision of maritime security in West Africa has largely been limited to the fight against piracy and armed robbery and, on a more limited scale, against drug smuggling on maritime routes.

Similar to East Africa, however, the priorities of regional governments are notably different from those of the EU. For many countries in West Africa, illegal, unreported, and unregulated (IUU) fishing is the most important threat in the maritime environment, even though it is not a traditional security concern. Limited maritime situational awareness and almost non-existent law enforcement at sea are aspects that will not be changed overnight but even small-scale NGO projects have shown that improvements are possible even in the short term. European governments certainly have the necessary capacities to provide assistance, but political will is an entirely different question.

Even in areas that are more closely related to traditional maritime security threats, European involvement in West Africa is generally not based on long-term planning. Training courses and other projects are rarely coordinated among partners, availability of relevant personnel is not taken into consideration, and overall goals are unlikely to be based on the priorities of partners in West Africa. Such criticism is mentioned time and again in conversations with naval officers and law enforcement officials from West Africa but does not seem to reach Europe.

European maritime security may not be directly threatened by challenges off the African coastline, but they certainly have an influence on Europe. Addressing these challenges as early as possible would be important to prevent a possible escalation, yet that is true for security challenges in general. Due to the international nature of the maritime environment, however, a lack of security at sea is likely to have an impact on several countries, creating the need for multinational solutions.

The European Union is in a unique position to strengthen maritime security, both at home and abroad. In theory, the combination of civilian and military measures is the perfect fit for a broad range of largely non-traditional maritime security challenges, ranging from piracy and armed robbery at sea to IUU fishing. In practice, however, the EU’s potential is often wasted by concentrating on areas that are important for European governments while failing to address the agendas of partnering governments.

In the Indian Ocean, counter-piracy operations have been very successful but based on a very narrow mandate. Other challenges to maritime security in the region have hardly been addressed so far. This might change in the future; amending the Djibouti Code of Conduct in January 2017 certainly was a step in the right direction. The document was adopted by governments around the western Indian Ocean in 2009 but originally was only concerned with the suppression of piracy. It took signatories around eight years to broaden the document with the Jeddah Amendment, signalling their intention to strengthen the ‘blue economy.’

In West Africa, a similar document was already adopted in 2013 and the European Union has signaled its intention to support implementation. So far, however, that support has been sketchy at best, and one of the EU’s main goals, the development of prosperous economies around the Gulf of Guinea, remains elusive. Addressing maritime security challenges alone will not immediately lead to economic growth, but it would certainly be an important step. The focus on maritime security in the wider context of the ‘blue economy,’ however, is not a traditional task for navies in Europe and will require better coordination between a wide range of partners such as governments, NGOs, and law enforcement agencies outside the military.

Dirk Siebels works as an analyst for Risk Intelligence. His research areas include maritime security issues in sub-Saharan Africa and he presents regularly at academic and military research institutions on related topics. Before starting to work in his current role, Dirk served as an officer in the German Navy and worked as a journalist and PR consultant for several years. He holds an MA in International Studies from Durham University and is currently working on a PhD in maritime security at the University of Greenwich. The views presented here are those of the author.

i West Africa in this context includes all coastal and island nations between Senegal in the north and Angola in the south. These countries are members of ECOWAS or ECCAS, the two regional economic communities for West and Central Africa, and have adopted the Yaoundé Code of Conduct to strengthen maritime security in the region.