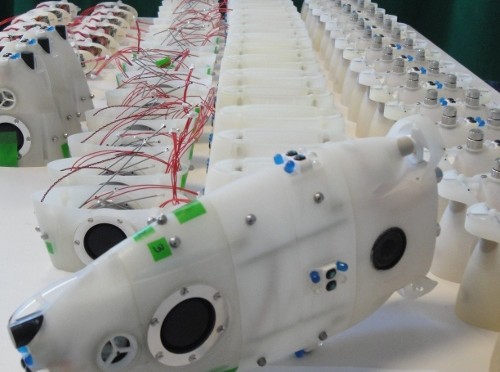 We’ve discussed that technology and its implications for naval use in a post here. CoCoRo (Collective Cognitive Robots) is a consortium of European universities led by the Artificial Life AL in the Department of Zoology at the Karl-Franzens-University Graz engaged in developing autonomous swarms of underwater vehicles to monitor, search, and explore the underwater realm.

As seen in the above video, their AUVs demonstrate novel underwater communications methods and simple swarming behavior. CoCoRo is building 20 copies of its newer AUV, “Jeff,” which can maneuver rapidly underwater and dock to a floating surface station for battery recharging and data transfer. Jeff is equipped with multiple communication tools including flashing blue LEDs, pressure wave, and sensors for potential field, obstacle avoidance, and shoaling.

Although small in scale, these experiments might prove useful to the development of a future generation of collaborative UUVs performing a variety of naval missions. Autonomous vehicles cooperating across various ocean depths will be useful for real time hydrography and to characterize acoustic propagation – a critical factor in antisubmarine warfare. Mine countermeasures is another obvious mission, along with autonomous swarmed attack against surface or sub-surface platforms.