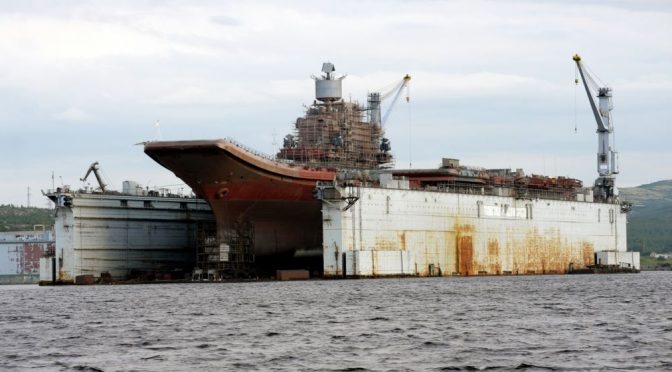 The icy waters of Murmansk harbor now cover one of the world’s largest floating dry-docks. Last week, a catastrophic power failure seems to have caused the dock’s pumps to jam, rapidly flooding the ballast tanks. As a result, PD-50, the largest floating dry-dock of the Russian Navy, sank to the bottom of the shipyard and now lies 160 feet below the surface.

Much attention has focused on damage to Russia’s sole aircraft carrier, the Admiral Kutznetsov, which was in PD-50 at the time of the incident. However, the loss of the dry-dock may have a more significant long-term impact on Russia’s ability to sustain its Northern Fleet. As a consequence, the ability of Russia to recover, repair, or even replace the dock assumes considerable importance because it is a maintenance asset of strategic import.

The EU sanctions regime against Russia is conducted under the auspices of the Common Foreign and Security Policy. It is directly applicable in EU law, meaning that it takes effect without the need for national legislation (in fact, most countries have no separate national sanctions regime against Russia). EU sanctions were established in March 2014 as a response to Russia’s activities in Ukraine. They have remained in force since and are reviewed at six-month intervals by the EU Council. The sanctions recently were extended until 31 January 2019. Further, the EU Council has stated that it will continue renewing these sanctions until the complete implementation of the Minsk agreement.

The EU sanctions are a range of measures including asset freezing, an import ban on items from the Crimea and Sevastopol, and a ban on tourism to the same areas. More pertinently for this discussion, sanctions have been enacted in specific economic sectors. This includes a ban on arms sales to Russia (article 4 Council Regulation (EU) 833/2014) and an export ban on dual-use goods (article 2 Council Regulation (EU) 833/2014), with minor amendments being made in Regulations 960/2014 and 1290/2014.

Proceeding on the assumption that these sanctions will remain in place for the foreseeable future, the question is whether the export ban on arms or dual-use goods includes replacement parts for PD-50—or indeed an entirely new dock—if supplied from within the EU.

The ban on dual-use goods, set forth in article 2, is more likely to be applicable. Dual-use items are defined in Council Regulation (EU) 428/2009 and include all items that can be used for civil and military purposes. Military end-use includes the “use of production equipment and components for the maintenance of military items,” as stated in article 4(2)(b). Although PD-50 is owned and operated by a private company, this definition focuses on the use of the equipment rather than the owner. The use of a dry-dock for the maintenance of an aircraft carrier (indisputably a military item) strongly suggests that it is caught by this provision. One could argue that this is an unduly broad interpretation of the phrase “production equipment,” but a contextual reading of the article clearly shows that these provisions are intended to cover a wide range of items that may be used to support military infrastructure.

The only caveat to the above analysis is that the sanctions do not affect the completion of contracts entered into before 1 August 2014. It is possible that the purchase agreement for the dock included an ongoing contractual obligation to provide replacement parts. If so, this would be unaffected by the sanction regime. In reality, it is very unlikely that such a provision was included and thus, this caveat can probably be discounted.

Unsurprisingly, there are few concrete details about the state of PD-50 and the prospects for the recovery of this strategic asset. Even a Russian news agency has accepted that this is a complex operation and unlikely to be completed within six months. A rapid repair or replacement of the dock is required to avoid severe pressures on the maintenance and availability of crucial Northern Fleet units and to conduct complex modernization work. Any support for this work is likely to be hampered by the EU sanctions regime, which now assumes additional significance following the sinking of PD-50.

Lieutenant Commander Peter Barker is a serving Royal Navy officer and barrister. He is currently the Associate Director for the Law of Coalition Warfare at the Stockton Center for the Study of International Law (@StocktonCenter), part of the U.S. Naval War College. He can be contacted at peter.barker.uk@usnwc.edu.

These views are presented in a personal capacity and  are the author’s own and do not necessarily represent the views of any ministry or government.

One thought on “Strategic Loss: How EU Sanctions Affect Russia’s Ability to Replace its Sunken Dry-Dock”