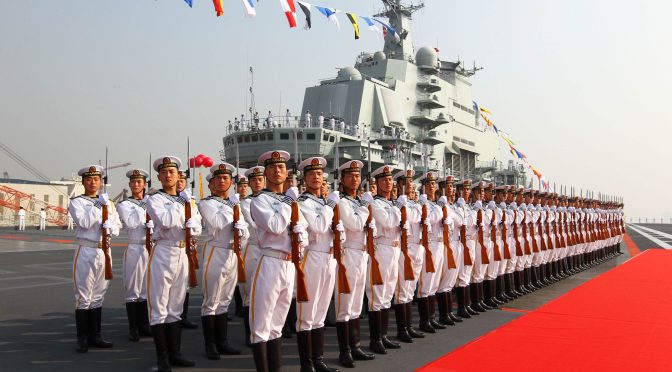 This article is part one of a two-part piece, drawn from a recently completed report by the author that was published by The Journal of Political Risk, and is available in its entirety here.

Recently, American policymakers and national security thinkers have begun to recognize that revisionist powers in the Peoples’ Republic of China (PRC) and Russia have no interest in preserving the current liberal order, and instead have embarked on a course to challenge and supplant the U.S. as the world’s superpower. However, the United States is not postured to mobilize for long-term strategic competition or war with great powers.

American policymakers’ assumptions regarding war preparation, prosecution, and sustainment are not aligned to the emerging 21st Century landscape dominated by three major trends: advances in understanding of neuroscience, dual-use technologies, and new financial business models. These articles take a holistic approach toward identifying how war mobilization in the 21st Century will look different from the industrial models of the mid-to-late 20th Century. Looking beyond the Defense Department, they explore economic, policy, social, technological, and informational aspects of planning and preparation. Part Two will identify why the intelligence and national security communities are not postured to detect or anticipate emerging disruptions and strategic latency. It will put forward strategies and recommendations on how to grow American power and create new sources of comparative advantage that can be rapidly converted into both kinetic and non-kinetic effects in all domains, not just military.

21st Century Trends That Will Shape the Coming War

Three main forces will shape the 21st Century: advances in neuroscience, emerging dual-use technologies, and new financial business models. The convergence of these forces creates disruptions on a mass scale. Chinese and Russian operations, policies, and investment decisions, along with market forces and changing consumer preferences each play a part in the changing geopolitical landscape, threatening the efficacy of American assumptions in strategic competition, war preparation, prosecution, and sustainment. This requires rethinking how the U.S. considers strategic warning and intelligence during peacetime, the transition from competition to conflict, the resiliency and capacity of current forces to “weather the storm” of initial combat, and whether the country is postured to transition to other means of using force during a global war with a great power. Perhaps most important will be the means by which the U.S. sustains its economic power and the political will to fight. Right now, adversaries are conducting systematic attacks on U.S. and allied sources of economic power, reducing and eliminating what was once considered the principle advantage of industrialized democracies, while at the same time using non-kinetic means to deliver mass cognitive attacks, destabilizing political societies.

The Brain as the Battlefield

Over the past forty years, scientists have made significant advancements in the study of the human brain. James Giordano and others point to immense potential for neuroscience and neurotechnology to “study, predict and influence” human ecologies, potentially affecting human activities on individual, group, and population levels, and human relations on a local, regional, and global scale. These understandings will permit the U.S. and its competitors to develop capabilities to assess, access, and affect the human brain. It will come to influence, and perhaps dominate, the posture and conduct of national security and the defense agenda.

The growth in understanding of the human brain, from evaluating its components and functions, to accessing and influencing it, will be a central focus of strategic competition, not unlike the space program of the Cold War, but with perhaps even more profound implications — the weaponization of brain sciences. Neuroscience can be leveraged as a soft weapon to create economic advantages, intelligence capabilities, and advanced psychological influence operations such as narrative networks. More concerning is how neuroscience can help develop hard weapons that use chemicals, biologicals, toxins, and devices to have physical effects.

Strategic competitors have invested considerable resources in the research, development, and fielding of neuroscience and biotechnology. China has announced initiatives to position itself as the leading power in brain science and is openly exploring the application of brain sciences to hard and soft power. Military writers and researchers in China argue that future battlefield success will depend on “biological dominance,” “mental/cognitive dominance,” and “intelligence dominance,” and are applying insights from neuroscience to exploit vulnerabilities in human cognition, to include the development of “brain control weaponry.”

A key driver of strategic competition is the explosive growth in globally powerful “dual-use” or “dual purpose” technologies. These include mobile internet, cloud computing, the exploitation of “big data,” the “internet of things,” ubiquitous sensors, nano-materials, additive manufacturing, self-navigating vehicles, autonomous industrial and civilian robots, artificial intelligence and machine learning, advanced energy storage, renewable energy, and “do it yourself” genomics. Since the end of the Cold War, advances in these technologies have had a significant impact on military technology and operational concepts1 in areas as diverse as space and cyberspace operations, biological weapons development, precision guided munitions (PGM), the realization of transoceanic-range precision strikes, autonomous unmanned combat systems and platforms (to include swarms), directed energy combat systems, and enhanced and protected infantry.2

More profound perhaps is how existing and emerging developments in science and technology enhance power in non-kinetic engagements, creating mass disruptive “weapons” that “incur rippling effects in and across targeted individuals, societies and nations.” These actions “can adversely impact, if not defeat, an opponent …” without meeting the current legally accepted criteria of an explicit act of war. These engagements may cause immediate-to-long-term damage to popular stability, but because the perpetrator of these engagements might remain ambiguous, it is politically problematic for the victim to respond. These types of operations are exceptionally difficult to identify in advance as threats, or can evoke effects which “may not be easily recognizable or attributable to the technology or the actor(s).”3

Adversaries pursue these dual-use technologies as means to deliver effects on a population’s brains, or even its genetic code, through the use of the electromagnetic spectrum via radio frequency or directed energy.4 The increased proliferation of Chinese telecommunications hardware, platforms, and infrastructure may provide a way for the PRC to conduct surveillance, collect intelligence, and execute influence operations. It is also a means to use the frequency spectrum to deliver effects at the neurological and even genetic level.5 This would likely be done using mundane and ubiquitous technology, such as 5G networks, cell phone applications, or even music or video streams.6

For example, Chinese telecommunication firms can now exert considerable influence because they enjoy approximately 78% of the leverage in the $3.5 trillion global communications industry.8 These firms should not be confused with traditionally understood commercial firms in the democracies, however. The Chinese Communist Party has put in place a legal and political regime that effectively controls corporate operations. This influence began when a Chinese state-owned enterprise made the initial investment in Huawei, telegraphing the Party’s intent to influence the global telecommunications industry.9 The Party has translated its investment into geo-economic effects that create debt obligations among developing countries (“debt-trap diplomacy”) as well as provide entry to Chinese “techno-authoritarian” influence and control of communities and states outside of China.

American national security planners must consider how to build sources of economic power, and sustain that power in a time of strategic competition and conflict, when America’s competitors exercise significant leverage over American, allied, and global industries. The capture and control of key industries such as telecommunications or space systems will circumscribe U.S. power and force policymakers into more difficult trade-offs to sustain a conflict. Information is a strategic resource and should be treated as such.10

The strategic competition between the United States and Allies, China, and Russia, and how states attempt to create and wield power on a global scale will drive the future security environment. There are two broad competing visions of international order: the Chinese and Russian techno-authoritarian model of control, and the liberal model of broadly supported international rules. The chance of this strategic competition erupting into outright conflict is very real.

The fact that both China and the United States – and important powers such as Russia, Great Britain, India, France, Pakistan, and others – are nuclear powers shape the competition in ways similar to the Cold War. Each side will seek to achieve strategic effects while attempting to limit the likelihood of a nuclear exchange. However, as the balance between conventional and non-kinetic powers of each side fluctuate, the risk grows that competitors will see their options reduced to “go nuclear or surrender,” as President Kennedy famously suggested.

This competition, like the one with the Soviets, will require a national effort toward sustained power creation and planning toward the sustained conversion of power into wartime, crisis, and peacetime capabilities. The United States is in the early stages of evaluating its level of preparedness. There are also important distinctions between the current Information Age and how future technologies will reshape human behavior and our understanding of it, and what that means for power creation, sustainment, and rapid conversion. Theoretical frameworks drawn from the Cold War provide some broad insights, but new approaches will be required.

Ultimately, strategic competition, mobilization, and preparedness are still acts of political will, and no effort will be sustainable that does not have the broad buy-in from the American people. It will require not only engagement from senior leaders and elected officials, but also their bipartisan leadership in explaining, gaining, and keeping political support.

Part two of this article will outline what steps the U.S. and Allies should take. When the brain is a battlefield, American paradigms of conflict preparation and executions must change to meet the challenges of an increasingly connected world.

LCDR Bebber is a Cryptologic Warfare officer assigned to Information Warfare Training Command Corry Station in Pensacola, Florida. The views expressed here do not represent those of the Department of Defense, Department of the Navy or the U.S. government. He welcomes your comments at jbebber@gmail.com.

1 Snow, Jen “Radical Leveling Technologies: What They Are, Why They Matter, and the Challenges to Come” Seminar Middlebury Institute of International Studies, Monterey, April 25, 2016.

2 Peter A. Wilson. “Concepts of National Mobilization circa 2036: Implications of Emerging Dual-Purpose and Military Technologies” prepared in support of the “Mobilization in 2030+” tabletop exercise played by the Long-Term Strategy program, (NDU Eisenhower School) March 30, 2016.

Featured Image: A naval honor guard at the in 2012 onboard the Chinese carrier Liaoning. (Xinhua News Agency Photo)

2 thoughts on “State of War, State of Mind: Reconsidering Mobilization in the Information Age, Pt. 1”