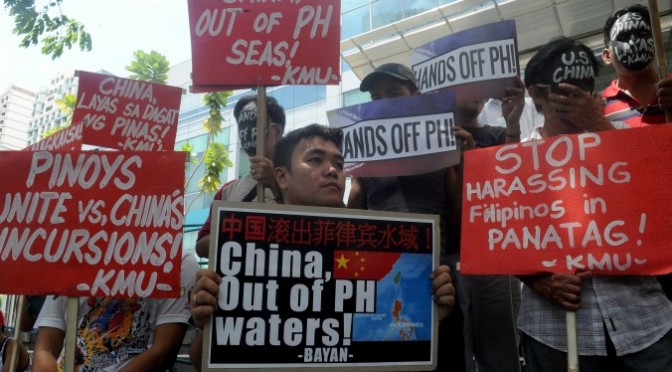 This is the third installment in a four-part series devoted to China’s 7 December 2014 document, putting forward her views on the Philippines’ international arbitration case on the South China Sea. Although Beijing is refusing to take part in the proceedings, as confirmed following the Court’s 29 October 2015 ruling on jurisdiction, by issuing this document, and communicating in other ways with the Court, the PRC has failed to completely stay aloof from the case. It is thus interesting to analyze China’s narrative as laid down in that document. Read Part One, Part Two.

Has Manila committed herself not to initiate compulsory arbitration proceedings? Section III largely consists of a long list of bilateral agreements and statements, and ASEAN documents, laying down commitments to settle disputes by negotiation and agreement, whose purpose is to prove that Manila is therefore “debarred from unilaterally initiating compulsory arbitration.” In the former category, the text cites among others (31) the “Joint Statement between the People’s Republic of China and the Republic of the Philippines concerning Consultations on the South China Sea and on Other Areas of Cooperation, issued on 10 August 1995” which contains “the principles that ‘[d]isputes shall be settled in a peaceful and friendly manner through consultations on the basis of equality and mutual respect’ (Point 1); that ‘a gradual and progressive process of cooperation shall be adopted with a view to eventually negotiating a settlement of the bilateral disputes’ (Point 3); and that ‘[d]isputes shall be settled by the countries directly concerned without prejudice to the freedom of navigation in the South China Sea’ (Point 8)” and (33) the “The Joint Statement” of 16 May 2000 whose Point 9 states that the two countries “agree to promote a peaceful settlement of disputes through bilateral friendly consultations and negotiations.”

Concerning China-ASEAN documents, the text stresses (35) the 2002 “Declaration on the Conduct of Parties in the South China Sea (‘DOC’),”whose Paragraph 4 reads “The Parties concerned undertake to resolve their territorial and jurisdictional disputes by peaceful means … through friendly consultations and negotiations by sovereign states directly concerned, in accordance with universally recognized principles of international law, including the 1982 UN Convention on the Law of the Sea.” The DOC is of particular interest, not only because it has also been signed by most coastal states in the South China Sea (although not by Taiwan), but because it has often been touted by observers and governments as proof that it was indeed possible to settle the status of the sea without resorting to war. Does this agreement close the doors to compulsory arbitration under UNCLOS? As often in the law, at least two different interpretations are possible. On the one hand, a literal reading of the quoted paragraph seems to restrict the avenues opened to coastal states, although the term “only” or words to that effect do not appear in that section (as China’s position paper openly acknowledges in its Section 40). On the other it could be argued that the reference to UNCLOS is in itself a door open to arbitration, since that treaty provides under certain conditions and limitations for this form of dispute settlement. An intermediate view could be that the DOS forces signatories to first resort to direct consultations and negotiations, with arbitration under UNCLOS as a last resort. Concerning this view, Manila argues that China has no intention to engage in meaningful negotiations, whereas Beijing says (45) that “the truth is that the two countries have never engaged in negotiations with regard to the subject-matter of the arbitration.” This is, at least to some degree, surprising, when we bear in mind the emphasis in the text on China’s commitment to negotiations. Given Beijing’s stress on bilateral negotiations, why have these have not even started with the Philippines? Not that they have not concluded, or progressed, but not even begun. Perhaps with such a question in mind, the position paper provides (47) some possible reasons, such as the fact that “the South China Sea issue involves a number of countries.” This is of course true, but by pointing it out as a reason not to have even begun negotiating with the Philippines, China is contradicting another pillar of its posture in the South China Sea: its insistence on bilateral, as opposed to multilateral, negotiations. One could thus argue that China cannot have its cake and eat it too. If the issue is complex because of the large number of actors involved, would a multilateral forum not be more appropriate? If so, why does Beijing insist on bilateral negotiations? And when someone like Manila argues these are leading nowhere, then the reply is that they have not even started because, among other reasons, of the large number of countries involved. There are of course powerful reasons why China may prefer a bilateral approach, but this illustrates how easy it is to fall into contradictions in the international arena, not something that affects just China of course.

With regard to the absence of an explicit exclusion of third-party settlement, which as pointed out the text acknowledges, China cites the “Southern Bluefin Tuna Case”where the arbitration tribunal stated that “the absence of an express exclusion of any procedure … is not decisive.” Two key words for China are to “agree”, which the text (38) explains often appears in bilateral communiques, and “to undertake”, which features (38) in Paragraph 4 of the DOC. China’s position paper stresses, citing the ICJ in Bosnia and Herzegovina v. Serbia and Montenegro, where the Court ruled that “[t]he ordinary meaning of the word ‘undertake’ is to give a formal promise, to bind or engage oneself, to give a pledge or promise, to agree, to accept an obligation. It is a word regularly used in treaties setting out the obligations of the Contracting Parties …. It is not merely hortatory or purposive.” For China, bilateral agreements and statements with the Philippines and the DOC are not separate realities, but (39) “mutually” reinforce “and form an agreement between China and the Philippines”, giving rise to “a mutual obligation to settle their relevant disputes through negotiations.”

The position paper underlines (50), as a further argument to prove that exchanges of views with the Philippines did not start in 1995, that it was not until 2009 that Manila abandoned claims in excess of UNCLOS. Concerning the doctrine of Estoppel, that is the ban on acting against one’s own acts, the paper rejects (51) Manila’s assertion that Beijing has incurred a “grave breach of the terms of the DOC,” preventing it from invoking Paragraph 4 “to exclude the jurisdiction of the Arbitral Tribunal”, dismissing it as “groundless.” The text considers this to be a “selective” resort to the DOC and a “self-contradictory tactic” amounting to a violation of “good faith.” It is true that a general principle of the law, also of international law, is that one cannot refer in isolation to a given excerpt from a rule or document. The problem is perhaps that the position paper overdoes this by next (55) referring to an alleged “current relationship of cooperation between China and the ASEAN member States in the South China Sea,” to which countries like Vietnam might not fully subscribe. The text (56) also argues that Manila’s resort to arbitration amounts to “running counter to the common wish and joint efforts of China and the ASEAN member States,” and here this is not something that can be so easily dismissed, since the Philippines has indeed been the only littoral state to try to resort to arbitration, although Vietnam and some other states, including non-littoral ones, seem to be at least providing a measure of support to Manila, although framed in terms designed not to overtly provoke China.

Lastly, the position paper argues (73) that when one state has issued a declaration in accordance with Article 298 of UNCLOS, excluding itself from compulsory arbitration in certain areas, another state cannot initiate proceedings arguing that they do not fall within the exemption, before first engaging in negotiations with the defendant state. The text says that otherwise Article 298 would be rendered “meaningless.” To reinforce this, the text adds (74) that this is the first such case, and that “Should the above approach be deemed acceptable, the question would then arise as to whether the provisions of Article 298 could still retain any value,” placing a question mark on “the declarations so far filed by 35 States Parties under Article 298.” Here we should distinguish the core of the matter from the procedural issues at stake. Even if it were to agree with Beijing on this point, the fact that the arbitration court will have to rule on the admissibility of the case and its own powers could be seen as a barrier to any attempt to institute compulsory arbitration in areas covered by an Article 298 exemption. Of course, the problem for the state sued is that in order to argue before the court that the latter should dismiss the case it would be necessary to appear before it, which is precisely what Beijing is bent on avoiding. Issuing this position paper is a way to make its views known, while avoiding this trap. As mentioned earlier, this can be interpreted in many ways. From the point of view of the rule of law and the progress of international law and tribunals, it can cut both ways. On the one hand, we could say that China’s (and Vietnam‘s) decision to address the PAC, despite not joining the proceedings, shows that these, and more generally international arbitration, cannot simply be ignored, whatever the protestations to the contrary. On the other hand, such moves may be seen as bypassing formal proceedings, and showing how imperfect the actual powers of international tribunals remain.