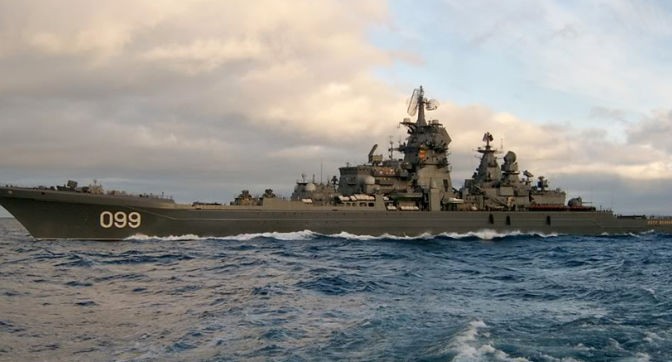 Official announcements related to naval shipbuilding give the appearance of a Russian Navy that is undergoing a rapid revival. However, the reality is that many projects have faced lengthy delays and cost overruns. As a result, some of the most prominent naval procurement projects have been scaled back, while others have been postponed for years at a time. The delays and cost overruns are the result of a long-term decline in naval research and development, an inability to modernize the shipbuilding industry made worse by Western sanctions, and pre-existing budgetary constraints that have been exacerbated in recent years by Russia’s economic downturn. However, the Russian Navy has developed a strategy that compensates for these gaps by utilizing its strength in submarines and cruise missile technology to fulfill key maritime missions such as homeland defense and power projection in the face of a failure to build an adequate number of large combat ships.

Russia’s current shipbuilding industry was primarily formed in the 1960s and 1970s, and its ship design capabilities have changed little since the early 1980s. As a result, Russian naval R&D has fallen several decades behind both Western and Asian capabilities in this sphere. Most Russian ship designs are less energy-efficient and more difficult to operate and maintain than comparable Western designs. Because of the lack of investment in modern technology, Russian design bureaus have been unable to transition to three-dimensional digital design, a process that was largely completed in Western shipbuilding in the 1990s. Lack of investment has also delayed the transition to assembly of hulls from large sections, a process that took place in the early 2000s in other countries’ shipyards.

Russian leaders recognized these problems in the late 2000s and sought to absorb Western knowledge through joint projects in both military and civilian shipbuilding. However, the freezing of military cooperation with NATO states in 2014 as a result of the Ukraine crisis has largely foreclosed the possibility of catching up by borrowing Western know-how. Russian naval R&D is therefore likely to remain significantly behind when compared to the Western state of the art.

Although it has improved somewhat in recent years, Russia’s shipbuilding industry is considered to be particularly outdated and poorly structured when compared to other sectors of Russian defense industry. United Shipbuilding Corporation (USC) is the least effective of all state corporations in Russia’s defense industry as a result of its excessive size, bloated management structures, and misguided efforts to combine military and civilian shipbuilding under a single corporate roof. Unlike the majority of shipyards in other countries, Russian shipyards function not just as assembly sites for ships but also manufacture many components and even machine tools used in shipbuilding. This makes the industry less efficient than its foreign counterparts. According to reports by Russian government officials in 2013, more than 70 percent of equipment at Russian shipyards was outdated and in need of replacement. Aged equipment has resulted in delays and cost overruns in the construction of naval ships designed along modern lines.

The impact of sanctions

Russian shipbuilding has suffered more than other defense industry sectors from the introduction of Western sanctions. The German company MTU has stopped supplying diesel engines for Project 20385 corvettes, leading the Russian Navy to delay production of the several ships model and revert to the older Project 20380 version, which uses less reliable domestically produced engines.

Ukraine has stopped supplying gas turbines for Russian ships, leading to significant delays in the production of Admiral Gorshkov and Admiral Grigorovich class frigates. According to the head of USC, efforts to substitute domestic gas turbines are currently under way, with a domestically produced sample turbine expected to be ready for testing no earlier than 2017. As a result of this shift to domestic production, only two Admiral Gorshkov and three Admiral Grigorovich class frigates will be commissioned before 2020. Other ships in both classes will be delayed by a minimum of three years.

Western sanctions have also resulted in major problems with the production of ship components, including electronics, sensors, pumps, and electric motors. Russian manufactured components are particularly lacking in the areas of navigation and communication equipment. Most of these components are not produced domestically in Russia, and the industry has long been dependent on imports from Europe for high quality components. Efforts to start domestic production are underway, but prices for domestic variants are relatively high while quality is relatively low. This situation has caused tension between USC and the Russian Navy. One option that is being actively considered is shifting to imports from China for some components.

The State Armament Program (SAP) for 2011-2020 assigned five trillion rubles, a quarter of the total program expenditure, to military shipbuilding. This amount was almost double the amount allocated to the ground forces and airborne forces combined. At the same time, it has been shown that this level of expenditure was beyond the means of the Russian government even prior to the budget crisis that began in 2014. While the percentage of Russian GDP devoted to military spending increased from 1.5 percent in 2010 to 3.4 percent in 2014, that level of spending was still sustainable for the Russian economy. However, SAP-2020 was backloaded, so that 70 percent of the expenditures were scheduled for the second half of the ten-year program. In the context of slowing economic growth even prior to the crisis that began in 2014, fulfilling these plans would have required Russian military spending to increase to levels of eight percent of GDP under the most realistic economic growth scenario, something that the economy could not support.

The economic crisis may result in further cuts to naval procurement. According to Russian analysts, fulfilling all currently announced naval procurement plans would require the amount of spending on military shipbuilding to increase to 6-7 trillion rubles for the next SAP. Initially, the military requested a total of 56 trillion rubles for new procurement for 2015-2025, though recognition of limits on the government’s financial resources resulted in cuts and a final request of 30 trillion rubles. Some reports suggested that even further cuts might be made, with the total program being potentially limited to only 14-15 trillion rubles. Furthermore, Russian media indicated that as a result of the unfavorable budget situation the next program may be postponed altogether.

The Russian Navy in a constrained resource environment

These financial constraints will result in Russia not being able to fulfill its goal of recapitalizing its navy with a new generation of large combat ships. Russia is unlikely to complete any new destroyers in the next ten years and will be able to complete only a small number of new frigates. At the same time, its legacy Soviet-era large combat ships will become less reliable as they age. The extent to which the Russian Navy can successfully modernize these ships will determine its ability to continue out-of-area deployments in numbers and frequency comparable to present-day rates – i.e. task groups of 2-5 ships – until the next generation of destroyers is ready in the late 2020s. If modernization programs are fulfilled only partially or not at all, by 2025 the Russian Navy will have few if any large combat ships capable of deploying regularly outside their bases’ immediate vicinity.

The Russian Navy will seek to ameliorate these limitations by focusing on developing its already formidable cruise missile strike capability. Post-Soviet innovations in precision-guided munitions, specifically tactical missile systems, are at the heart of Russia’s naval modernization. Moscow regards these systems – universal VLS armed with the latest anti-ship and land-attack cruise missiles – as potent force multipliers capable of offsetting Russian shortfalls in both the numbers and quality of ships in its fleets.

Their advent has allowed the Russian Navy to create true multi-mission platforms, capable of providing combat-credible force across several warfare areas. This innovation will allow Russia to substitute its diminishing number of large combatants with smaller ships that have limited suitability for expeditionary, blue water operations, but can nonetheless support defense and deterrence goals from seas adjacent to Russia’s littoral spaces. This focus will be combined with limited power projection based primarily on submarine that will be armed with similar cruise missiles.

Together, the combination of 30-40 small combat ships (frigates and corvettes) and 15-20 nuclear and diesel powered submarines – all armed with cruise missiles – will allow the Russian Navy to maintain its ability to protect its coastline and to threaten neighboring states. While it will not be able to project power globally, Russia’s naval capabilities will be sufficient to achieve its main maritime goals.

Dmitry Gorenburg is a senior research scientist in the Strategic Studies division of CNA, a not-for-profit research and analysis organization, where he has worked since 2000. He holds a Ph.D in political science from Harvard University and a B.A. in international relations from Princeton University. He blogs on issues related to the Russian military at http://russiamil.wordpress.com.