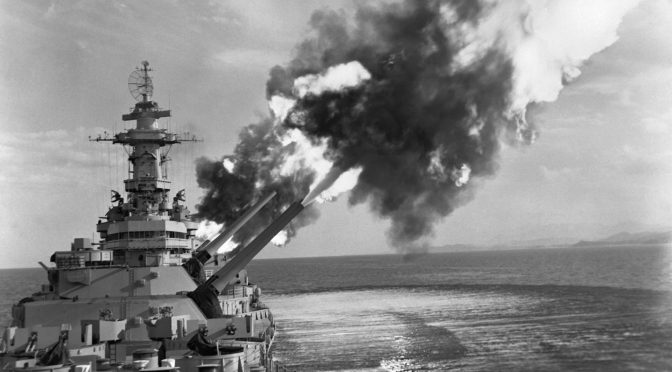 How would the world be different if the Five-Power Treaty (also known as the Washington Naval Treaty) had never been signed, allowing unfettered naval rearmament by the world’s major military powers in the wake of World War One? Sheppard of the Argonne, the impressive debut effort by author G. William Weatherly (interviewed by CIMSEC here), the pen name for Captain George Jackson, USN (ret.), takes place in just such an alternative history. Opening at the beginning of the American effort in World War Two, Weatherly’s story intertwines his detailed, illustrative take on “what could have been” with faithfully rendered historical details and factual events. History buffs and naval enthusiasts alike will find something to enjoy in Sheppard, a novel with a diverse, carefully-drawn cast of characters and an eye for meticulous technical details. Indeed, it is the harmony between the men themselves and the machines they command and operate that makes Sheppard such a delight to read.

We meet our protagonist, Captain Sheppard McCloud of the United States Navy, shortly after the events of December 7th, 1941. In the immediate wake of Weatherly’s version of Pearl Harbor, Captain McCloud, then in command of Shenandoah,  makes a bold and fateful decision to pursue and attack the Japanese aggressors off the coast of Hawaii. The consequences of this decision weigh heavily on Sheppard; as a result of the engagement, a significant portion of Shenandoah’s crew lost their lives, while many more were severely injured, including Sheppard himself. Though he is hailed as a hero for his actions, the physical and mental scars of contact with the enemy are forever in the forefront of Captain McCloud’s mind. Reflective of the attitudes of the day, Sheppard feels he must carry this burden alone.

At the outset of Weatherly’s tale, an injured but resolute Sheppard is assigned command of Argonne, one of two Norfolk-based capital ships about to accompany two carriers into the increasingly dangerous Atlantic theater of World War Two. Under the larger command of Admiral Hamilton, Argonne and her sister ships have a simple but crucial mission: stop German naval forces from completely starving the British population and ending their war effort. Aboard Argonne, Sheppard is joined by a dedicated and diverse crew of officers and men, including, much to his delight and relief, some familiar faces from the Shenandoah. Upon leaving Norfolk harbor, Sheppard and his men must immediately rise to the challenge of their tasking.

G. William Weatherly’s background as a U.S. Navy captain shines in careful, detailed way Sheppard presents not only the naval engagements but also the technology itself in meticulous relief. Readers who are familiar with naval technology will be delighted by Weatherly’s explanations and renderings of the ship’s armament and technology complement. While much of the equipment and techniques are faithfully rendered in accordance with the time period, Weatherly has accelerated some developments as they might have been if the Washington Naval Treaty were never signed. Readers experience the full spectrum of naval warfare, from the cockpits of Argonne’s Kingfisher complement to German U-boats below the water’s surface. As Sheppard is a fast-paced and action packed tale, Weatherly does readers a great service by clearly illustrating naval tactics and procedures.  Even those who are unfamiliar with the intricacies of battle on the high seas will be able to follow along with the events of the novel as they transpire.

As any member of the naval profession will attest, the men who make up a ship’s crew determine its success or failure just as surely as its technology and design. So too is the case in Sheppard of the Argonne. Captain McCloud himself is a complicated but aspirational protagonist; every decision and action is influenced by his harrowing experience in the Pacific. In addition to her commanding officer, readers are introduced to Argonne’s department heads, junior officers, chiefs, and enlisted men. Sheppard’s presence and leadership style is among the novel’s most memorable aspects; naval professional’s will appreciate the care the author uses in developing relationships between the Commanding Officer and his crew. Further, Weatherly’s wide-reaching scope includes the perspectives of high leadership, Germans, and British officers. The result is a complete and engaging look at the many personalities and passions that make up the naval service.

Sheppard of the Argonne is a gripping alternative history that will surely appeal to a wide audience; historians, naval enthusiasts, and casual readers alike will enjoy following Captain McCloud and his crew into battle. G. William Weatherly’s realistic and faithfully rendered portrait of service at sea will be especially enjoyable to veterans of the sea services. As the saga continues, Sheppard McCloud and his men will surely continue to develop as a crew. Readers can look forward to hearing more about Sheppard and the men of the Argonne in the future; Weatherly will soon finalize the second novel in the series and work is well underway on the third.

Sally DeBoer is the Book Review Coordinator for CIMSEC. She can be reached at books@cimsec.org.