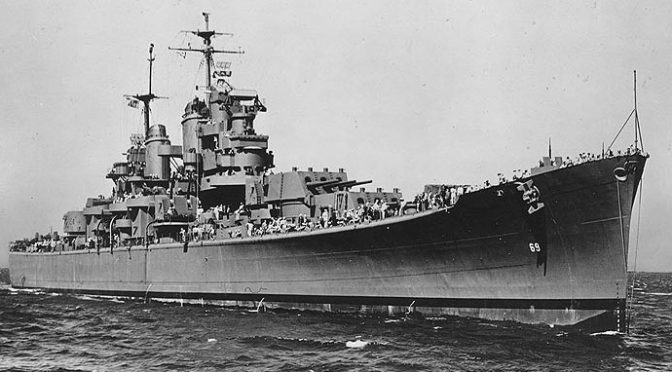 SD: Sir, it is an honor to speak with you today. Before we get started talking about your book, could you provide some background on your career in the Naval service?

GWW: I commanded three submarines: the USS Shark, the USS Billfish, and the Pre-commissioning unit of the SSBN USS Rhode Island. After that I went the US Naval War College as Chairman of the Joint Military Operations department. I had about 2000 students that came through for the Joint Professional Military Education program.

SD: What audience did you intend for your work? Did you have a specific reader in mind when you were writing?

GWW: Yes and No. Clearly, it appeals to people who are interested in the Second World War and specifically the Navy. I wrote it to try to bring back to life the war at sea as we approach the 75th anniversary of some of the major battles. I wanted to incorporate more than would be allowed by historical fiction alone, so I took my main character and put him in command of a ship in a difficult operational scenario. Readers see interactions with submarines and aircraft, then eventually a big gun battle between capital ships, which was a very rare thing in the war.

SD: That was my next question! Sheppard of the Argonne is an alternative history, taking place in a world where the Five-Power Treaty (aka the Washington Naval Treaty) was never signed, leaving nations’ ability to develop their naval forces unhindered. Why did you choose to pursue an alternative history?

GWW: When I was in high school, I wrote a term paper on the Washington Naval Treaty and was enthralled with the idea of “what if?” What if it hadn’t been signed and the development of ships and technology, which had been proceeding very rapidly, was allowed to continue? This was the genesis of the idea of having an alternative history. I read a lot of history, looking for places where things could have occurred that were “almost, but not quite,” and analyzing what the downstream effects might have been. I have recently read a lot of books by Professor Marder, who has done a marvelous job of documenting the British admiralty between about 1900-1940 and the decisions that they made. There is a specific example of where the British had the right idea with the Dardanelles, but the admiral in charge was not forceful enough to act in a way that could have affected the outcome of the First World War.

SD: Your writing is very technical and detailed. From describing systems themselves to the engagements between forces, Sheppard of the Argonne paints extremely clear and accurate pictures. Why did you include this level of detail?

GWW: I am an engineer by training! I went to the University of Wisconsin and majored in nuclear engineering, thinking it would help me with Admiral Rickover, which turned out to be a very bad decision! He did not like people who had majored in his subject area. Somehow he managed to accept me and the rest, as they say, is history.

SD: Do you have any funny Admiral Rickover stories? I know he is quite an iconoclast.

GWW: He managed to give me quite a grilling and tried to set me up on a date with some of his secretaries, who came in to evaluate whether I was handsome or not. But the real Rickover story occurred several years later when I was serving on his staff. After interview days, I would debrief the candidates as they finished the interview with the admiral and scribble down their answers. At the end of the day I had to go down and describe to Admiral Rickover what had gone on that day. He usually just asked “did they complain?” (No.) But one day he asked “What did they say?” As you can imagine everything at Naval Reactors was quite literal…that meant I had to report to him all 66 pages of notes verbatim. I decided to start with what I presumed would be a “safe” comment, in which a candidate stated he now “had his Rickover story!” The admiral stopped what he was doing (never a good sign) leaned back in his rocking chair to ask me “Oh, what is a Rickover story?” So I had to explain to him what a Rickover story was. I think this was kind of a test to see how I would respond. After I had successfully defined what a “Rickover Story” was, he asked me if I knew any. Of course, I did (Yes, sir!) so I had to spend fifteen minutes telling Admiral Rickover “Admiral Rickover Stories.”

SD: Oh wow, I can imagine that was quite the challenge! This relates to my next question. Are any of the characters in Argonne inspired by individuals you met during your time in the service?

GWW: They are from the standpoint that the protagonist, Sheppard, is a compendium of all the great naval officers that I knew, and how they responded to leadership problems. He is also a flawed character as a result of what happened to him at the fictional battle of Pearl Harbor, where he lost many of his men. That has affected him greatly.

SD: The characters in Sheppard of the Argonne, particularly the protagonist, Capt. Sheppard McCloud, are well drawn and diverse. At times, Capt. McCloud faces situations in which there are no perfect answers. Is this reflective of your experience in command?

GWW: Yes. I think that every naval officer faces times when there are really no good answers, and you have to work your way through them. Sheppard is actually using operational planning in that he has a mission that has been assigned, and the main path through which he would accomplish that, the main battery, isn’t working. So he has to come up with something else using the capabilities that are under his control to accomplish his mission. His mission is not to sink the German fleet, only to stop them, so he is able to accomplish his mission by stopping them.

SD: We also see Captain McCloud face some unique leadership challenges; his men regard him in high esteem. For our readers in the Naval service, what lessons do you think they can draw from this example?

GWW: I think the best one that can be drawn is absolute honesty and treating everyone, regardless of their rank, with respect. All of the men that are working for him have risen to that. There are a couple of characters (from Sheppard’s previous command) who have made it their life’s work to take care of Sheppard. One character, Petty Officer Cruz, was the one who helped save an injured Sheppard on Shenandoah; he is bound and determined to take care of Sheppard. He sets up this really marvelous use of talent from the deck gang, maybe you’d call them “rednecks,” who are really good at shooting birds on the fly with a .22 Remington. Their skill with that leads to exceptional performance from Cruz’s 40mm mount. When you show people respect [like Sheppard does] and give them some latitude to exercise their initiative, the results can be really quite exceptional.

GWW: Yes, I deliberately put another character in command of the other battle cruiser that maybe didn’t deserve command but achieved it through political connections. His micromanagement style just creates one problem after another for him, beginning when they are leaving Norfolk and one of his sailors fails to cut in enough air when they start a boiler, creating a situation where a determined submariner knew they were coming.

SD: We always like to know what our authors are reading. What is the most recent book you’ve read, and can you recommend any “must reads” to our audience here at CIMSEC?

GWW: I don’t have any “must reads,” as I think everyone will gravitate toward their own interests. As I mentioned, I just finished reading Professor Marder’s books, there are six volumes right now. I just started “Billy Mitchell and his War Against the Navy,” which is pretty interesting, I learned some things about Billy Mitchell. He had some very good ideas but went about trying to get them accomplished via the wrong methods. Everyone knows about him bombing battleships but he was trying very hard to campaign for a unified air force modeled after the RAF after the end of the First World War.

SD: Finally, can we expect to read more about Sheppard McCloud soon? Might this be a series?

GWW: The second book, which I am finishing up right now, is called Sheppard and the French Rescue. I allude to it in the book when Admiral Hamilton is giving the strategic perspective of Rommel having turned westward, inciting fear that the French colonies will soon be under Axis control. There is a French fleet near Oran in Algeria, and President Roosevelt (in the second book) decides that they have to save or incapacitate that fleet, because if the Germans get control of it, the allies will lose the war. The situation I set up is more of a difficult Atlantic naval war in addition to the war in the Pacific, [which in the stories] follows pretty much traditional lines. The third book is about half done and I have an outline for a fourth. I love to write and I think, fundamentally, I am a storyteller…at least good enough to be dismissed from Admiral Rickover’s presence without too much damage to my career!

SD: Yes I would say that’s about the toughest test any author could face! Is there anything else you’d like our readers at CIMSEC to know about your book?

GWW: In terms of WWII, DoD statistics show that about 16 million people served in the armed forces or related activities out of a population of 130 million. There were a great many veterans, and the thing that struck me was that they rarely if ever talked about their battle experiences. It hasn’t been until recently, as they have gotten much older, that they have begun to open up and done oral histories etc. One of the characteristics that I learned about PTSD is that it is actually a very common phenomenon. In the Second World War, anyone that showed the symptoms of post-traumatic stress was shunned or considered a coward. There was a very famous incident of Gen Patton slapping a soldier in Sicily that was suffering from PTSD. One of the things that I wanted to bring to light with this book was how post-traumatic stress affected people then, and how they had to deal with it in private. As the book alludes, the only person that knows something is wrong with Sheppard is his wife, Evelyn, but she really can’t do anything. Early in the book Sheppard has a flashback, and is also plagued by nightmares. He is desperately afraid of betraying his fears to his men while sleep talking…he does not want them to doubt his abilities as a leader.

SD: Thank you all for reading today and thank you, Captain Jackson, for taking time out of your schedule to talk with CIMSEC. If you would like to find out more about Sheppard of the Argonne, you can purchase a copy here.

Sally DeBoer is the Book and Publication Review Coordinator for CIMSEC.  She can be reached at books@cimsec.org.