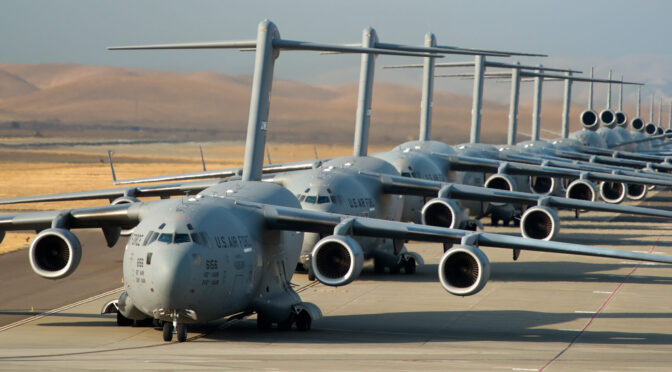 Shortly after midnight on February 3rd, 1943, the SS Dorchester was torpedoed by a German U-boat near the southern tip of Greenland. If the name Dorchester sounds familiar, it may be because its sinking made famous the selfless sacrifice of the Four Chaplains. What is also notable about the Dorchester is that the sinking of that troopship was the greatest single loss of life—674 of the 904 men on board were killed—in the Battle of the Atlantic, the Allied effort to sustain the campaign to defeat the Axis Powers in Europe. Despite the singular tragedy of the men lost on the Dorchester, it is easily lost among many such sinkings; by war’s end, nearly 38,000 Allied nation merchant sailors had perished in the North Atlantic.

A campaign like the Battle of the Atlantic, in which thousands of ships fought their way through U-boat-infested waters to keep alive the Allied war effort, seems unimaginable today. U.S. forces have not been threatened during the ‘expedition’ part of expeditionary operations since 1945, and in the three decades of unipolarity since the fall of the Soviet Union, the only threats of concern have been isolated, individual attacks on U.S. troops moving between theaters. If this historical trend were to continue, then United States Transportation Command’s (USTRANSCOM) problem of recapitalizing the sealift fleet would be straightforward; a new surge sealift fleet would require only the most basic capabilities and crews with only basic mariner skill sets. Is this a valid expectation, or should U.S. forces expect formerly permissive environments to become contested? If it is not a valid expectation, what should USTRANSCOM do to increase the defensive capabilities of its sealift fleet?

Operational access is a strategic requirement for the United States. As noted by the Joint Chiefs of Staff in the Joint Operational Access Concept (JOAC), protecting global interests as a global power requires the ability to project military force into any region of the world. In spite of the historical assumption of unfettered U.S. access to the global commons, American military planners can no longer assume that U.S. forces can move to theater free from conventional military threats. Published in 2012, the JOAC notes three challenges for U.S. force projection in the future: the proliferation of antiaccess and area-denial (A2/AD) weapons technology, the rapidly changing U.S. overseas defense posture, and the increase in cross-domain threats, specifically in space and cyberspace.

The concerns outlined in the JOAC dovetail with concerns in the National Defense Strategy (published in 2018) and the President’s Interim National Security Strategy (published in March of this year) which clearly identify strategic competition with near-peer rivals as the greatest threat to American interests. Power projection and operational access, two of the seapower functions identified in joint doctrine, are increasingly at risk from the rising capabilities of adversaries. Should the U.S. find itself entangled in large scale combat operations in a distant theater, the chances that U.S. forces could be threatened while transiting to those theaters are greater now than they have been in several decades. What does this new threat environment mean for USTRANSCOM, given its responsibility for force projection and sustainment for the U.S. military?

USTRANSCOM has given thought to these developments. Since 2016, USTRANSCOM has conducted at least 11 studies on mobility capabilities in contested environments, which yielded at least 59 recommendations for shaping future mobility capabilities (the reports are all at least partially sensitive or classified). The Government Accountability Office (GAO) surveyed just the unclassified portions of these reports to assess how effectively USTRANSCOM’s service components were adapting to the developing threat environment. The GAO concluded that while USTRANSCOM and the greater Department of Defense (DoD) were acting on information in the reports, they were not systematically implementing or even tracking compliance with the recommendations.

Having been assigned to an AMC tanker squadron shortly before the integrated mission sorties were implemented, I had the opportunity to witness this training evolution in action. The new sortie structure—which emphasized countering near-peer capabilities, especially of an A2/AD variety—required crews to plan, execute, and adapt missions in a way they had not in at least the previous decade. One of the key components of this training evolution is that the capabilities exercised were influenced by inputs from the geographic combatant commands (GCCs). This was a key factor in ensuring that limited training resources were directed towards skills and capabilities relevant to expected threats.

What has Military Sealift Command (MSC) done in response to USTRANSCOM’s studies? Last October, MSC added contested environment training to the program for its strategic sealift officers. In 2018, MSC also created a Tactical Advisor program to supplement the mariner crews who would operate both organic USTRANSCOM shipping and contracted commercial vessels. This program is expected to yield up to 150 advisors by this year, but given that the Tactical Advisors are Navy Reserve strategic sealift officers and surface warfare officers, there may not be enough to supplement sealift crews during a major contingency (many of these officers would be called to man surface combatants or USTRANSCOM’s organic sealift assets). MSC has also begun training enlisted communications technicians to operate mobile secure communications equipment issued to surge sealift ships in a major contingency, but as of September, only 22 such personnel had been trained.

The missing link in MSC’s preparation for future threat environments seems to be the bulk of the sealift force: the citizen mariners who will crew America’s sealift fleet should a major war break out. MSC and the Department of Transportation’s Maritime Administration noted that training requirements for these crews are specified in contracts with sealift companies. Skills like ship maintenance, cargo loading and unloading, and navigation are critical day-to-day competencies, but these sailors have received effectively no contested environment training. MSC has attempted to remedy this during exercises like Turbo Activation wherein Tactical Advisors conduct training with the sealift crews, but noted that the small number of advisors and limited number of ships involved (about 25% of the sealift fleet) in the annual exercise limited the distribution of training across that force.

Similar to AMC’s efforts to replace aging platforms, MSC has made plans to replace its aging surge sealift fleet. As of February, 2021, the Navy had still not published a capabilities document for a future sealift platform, but the final phase of its sealift recapitalization anticipates initial delivery of such a platform in 2028, with service life extensions and used commercial ships bridging the gap. A capabilities document is expected to outline any defensive capabilities the Navy would require of a new sealift ship.

The Other War: Fighting to Modernize on a Limited Budget

What can USTRANSCOM do in the short term to maximize the defensive potential of its sealift fleet when replacement of older vessels with newer, more capable platforms and training systems that saturates the force with applicable skills are both years and billions of dollars away? A large-scale program to equip the current fleet with defensive systems and crews fully capable of sailing into or through contested waters is certainly out of the question; from the perspective of the resources required and current priorities as the entire military shifts focus to great power competition, it simply will not happen.

What is the alternative? One might be the measure AMC took to develop more targeted and tailored mission training for its aircrews. USTRANSCOM could survey the GCCs for what they consider to be the greatest tactical threats to shipping and aim its limited training resources to optimize the benefit to future operations. Another avenue is to consider the balance of training funds versus recapitalization; ultimately, the fleet must be renewed with new ships that can reliably deliver forces to the point of conflict, but that fleet is years away.

What current capabilities can bridge the gap? The program to train merchant mariners with tactical advisors could be expanded, and older ships with better-trained crews could improve survivability in a threat environment for far fewer dollars than a crash program to build new ships. If the priority is high enough, those tactical advisors could be temporarily brought in from active duty Navy forces, rather than relying solely on reserve forces.

Ultimately, the GAO highlighted that USTRANSCOM does not have a program to track modernization and training prioritization as it related to contested environments. With proper oversight, USTRANSCOM could develop an overarching program that integrates analysis of likely future threats and develops training tailored to meet those threats with modernization and recapitalization of both sealift and air mobility platforms. USTRANSCOM could also coordinate these efforts with our allies through avenues like Joint Force Command Norfolk, NATO’s answer to maintaining security of the critical Atlantic sea lanes.

Conclusion: Past Performance Isn’t Predictive, but It Can Inform Us

At the height of the Second World War, the Allies were operating sealift vessels in the tens of thousands; what is remarkable is that over 3,500 noncombatant ships like the Dorchester were sunk—and the Battle of the Atlantic was still a resounding victory for the Allies! The scale of shipbuilding and crew training required to sustain such a campaign is truly mind-boggling. The industrial nature of that campaign, during the height of which over 100 new ships were built per month in the U.S. alone, is unlikely to ever happen again.

Sealifting forces on the scale of WW2 is no longer required (a single M1 Abrams probably outmatches ten or more M4 Shermans in combat effects) and is it also unlikely to be reproduced (just nine construction shipyards are active in the U.S. today; during WW2 there were over 50 in operation). It is not unreasonable to conclude that America does not need a more capable sealift fleet given the safety U.S. forces have enjoyed when deploying and redeploying from theater for the last 70 years. However, no one can deny that the environment in which U.S. forces operate is fluid and unpredictable; counting on the threats to remain at their current level would be both foolish and irresponsible. As the long arm of American military power, USTRANSCOM must have the capability to deliver forces anywhere in the world at lightning speed. Maintaining this capability means deliberately monitoring competitors’ capabilities and countering them when they threaten the ability to deploy military force.

Major Phillip Amrine is an operations planner at Headquarters, Fifteenth Air Force. He has combat deployments in the KC-135 Stratotanker, C-5 Galaxy, and MC-12 Liberty. He is a 2008 graduate of the United States Air Force Academy and is currently a candidate for Master of Arts in Strategic Studies at Norwich University.