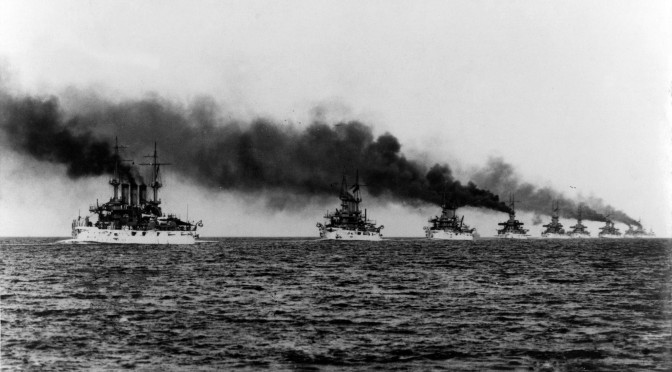 This essay by LCDR BJ Armstrong is part of the Personal Theories of Power series, a joint Bridge–CIMSEC project which asked a group of national security professionals to provide their theory of power and its application. We hope this launches a long and insightful debate that may one day shape policy.

This is offered not as a personal dogma, or a theory of overall power, but instead as some general thoughts on a specific element of national power: sea power.

“The Navy, within the Department of the Navy, shall be organized, trained, and equipped primarily for prompt and sustained combat incident to operations at sea.”

It shouldn’t surprise any of us that combat at sea is the focus of the United States Navy. It seems perfectly rational. This focus, codified in law and embraced by recent tradition, results in a view of sea power that skews toward the wartime, both the operational and tactical. Over the past century this has resulted in a slow migration away from the true meaning of the word. “Sea power” has lost the broad political, diplomatic, and economic meaning and the importance that it once had, shifting away from its true and proper place in strategic affairs.

Uniformed and civilian senior leaders are not solely responsible for this shift. Strategists, with a broad definition of the label, share a hand in the shift as well. The Clausewitzians and devotees of Sun Tzu have come to dominate the foundations of strategic thought in the 21st century. There is no doubt that the writings of these thinkers offer a great deal to inform military affairs today. There are, however, some issues with using the texts of the Prussian General and the Chinese courtier as baselines for modern views of strategy. In doing so, we take continentalist views of the relationships between states and military force and attempt to apply them to a globalized world.

The migration of sea power toward the operational and tactical, and the attempts to connect it to continentalist strategic ideals, can be seen partially in the rise in popularity of Sir Julian Corbett’s Some Principles of Maritime Strategy. As Alfred Thayer Mahan’s influence has declined Corbett’s has grown and is commonly cited as more “relevant” by naval officers today. Surely, part of this has to do with the simple fact that Corbett wrote more clearly than Mahan did. It also must be stated that one book is not illustrative of the entirety of the British lawyer and lecturer’s thinking on sea power. However, the tendency within Corbett’s book to focus toward operational issues, or the “grammar” of naval strategy, allows it to appeal to a more practically minded, combat centric officer corps.

Sea power, however, is much more than operational design or combat planning for forces at sea. It has to do with international relationships, economic power, commercial interests, diplomacy and statecraft. Its results are not seen solely at the business end of a Tomahawk missile or in ballistic missile submarine patrols, but also on the stock of shelves at Walmart and the price of gas at the pump. This confusion, between the battle fleet and the navy, between combat incident to operations at sea and the global power and influence of maritime forces, results from the view which labels sea power as a domain centered ideal, as another name for combat operations at sea, rather than a broader field with wider relevance to the world affairs.

The concepts surrounding the importance of naval forces, and the role which maritime issues play in global affairs, go back centuries. From Thucydides to Sir Walter Raleigh the importance of power at sea had been recognized and written about long before Mahan began reading Gibbon at the English Club while on liberty ashore in Lima. Despite our modern focus toward it, combat between fleets was never the exclusive raison d’etre for maritime forces, or the only lever of power available to them. Raleigh illustrated this in the 17th century when he wrote, “whosoever commands the sea, commands the trade; whosoever commands the trade of the world commands the riches of the world, and consequently the world itself.” In the United States this was echoed in 1787 by Federalist Paper No. 11, which advocated for the founding of the United States Navy on diplomatic and economic/commercial grounds instead of the need for wartime combat at sea.

In The Influence of Sea Power Upon History Mahan lays out the six elements of what makes a nation a sea power, none of which explicitly involve combat. Instead they are the factors that lead a nation to become a sea power. His initial discussion is as much political is it is military. In later works he continued to develop his thoughts on the position of sea power in world affairs. We all know the Clausewitizan truism that war is politics by other means. However, Mahan took things a step further and stated that political/diplomatic, economic/commercial, and military/combat considerations were all one integrated problem and that sea power was part of the connective tissue between the three in a globalized world.

This view of sea power, as something more than simply the when and how battle fleets are put together for combat, may be part of the reason that some continental strategists tend to struggle with the concept. Sea power strays into the realm of statecraft, global rivalries, and grand strategy in a way that may be uncomfortable for strategists focused on borders, territorial occupation, and the “decisiveness” of boots on the ground forcing a population to relent. The very concept of grand strategy is anathema to some, and debated by others, who claim the strict constructionist view of Clausewitz’s writing. These strategists tell us that the word “strategy” is reserved only for military combat. Today the concept of sea power is all too often viewed through this very limiting prism.

Bringing Balance to the Force

There are two dueling roles of navies that must be fulfilled to truly exercise sea power. One, as alluded to in the mission outlined by the Code of Federal Regulations, is to fight wars on and from the sea. This is critical. The ability to defeat adversaries lies at the foundation of the credibility needed to execute the rest of the sea power writ. But it is as much the beginning as it is the end of the sea power discussion.

The other mission of naval forces, which has been an important part of naval history for centuries, is to preserve the peace and secure the global system. This dual responsibility, conducting deployments and operations in both wartime and peacetime, has been central to American naval history since the very founding of the Republic. It was illustrated by Professor Craig Symonds when, in his study of the political debates on naval affairs in the first decades of the nation, he wrote:

All of President James Monroe’s surviving papers on the navy or on naval policy reflect a concern that it efficiently perform two distinct services: first, that it be adequate to cope with the daily problems of a maritime nation — smuggling, piracy, and combating the slave trade; and, second, that it provide the United States with a comfortable degree of readiness in case war should be forced upon the nation.

Despite this centuries old tension between the exercise of sea power in war and in peace, since 1941 the United States Navy has maintained itself on a war footing. The Second World War led directly into the Cold War and when the Soviet Union fell decades later the Navy’s institutional memory remembered nothing but a wartime posture. This mindset is not exclusive to the Navy. However, as a result the sea services have struggled with their vital role in the peace for more than two decades. Some have even resisted the discussion of their importance to the global system on a level above “combat incident to operations at sea.”

As we approach the centenary of Mahan’s death it is time to reexamine our modern conceptions of sea power. This will be a challenge. In recent decades naval officers have been taught strategy built on a land power framework and may have overlooked some of the fundamental differences between a continental view of national power and a global view international affairs. To uphold our responsibilities and American interests in the 21st century we must focus on a global view. It is time to expand the thinking, writing, and theory of sea power across the spectrum of its military, political, and economic implications. The broader obligations of a maritime state and a global power require it.

BJ Armstrong is a naval officer, helicopter pilot, PhD candidate with King’s College, London, and a member of the Editorial Board of the U.S. Naval Institute. He is the editor of “21st Century Mahan: Sound Military Conclusions for the Modern Era.” The opinions and views expressed are those of the author alone and are presented in his private capacity.

4 thoughts on “Sea Power Matters: A Personal Theory of Power”