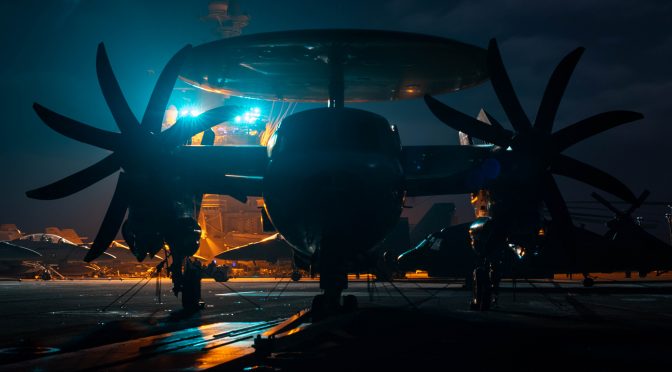 From the dawn of naval war through the mid-twentieth century, sea control served political ends only indirectly. A force that exercised sufficient control of waterways could bombard, assault, withdraw, and feint from the sea, but could not (unless fighting an island enemy) produce war-ending consequences, absent victory on land.1 Witness Britain’s numerous post-Trafalgar conventional and guerilla campaigns against Napoleon. Even in the vast oceanic reaches of the Second World War’s Pacific theater, the Allies chose to seize key nodes in Japan’s island defensive network rather than simply suppress them. In the industrial era of warfare, comparatively few such nodes could be destroyed by fire, and new aircraft and ships could be made quickly available if destroyed. Sea control was an indispensable prerequisite to victory, but by itself did not win wars.2

In modern maritime war between great powers, sea control equates to leverage for war termination and the shape of post-war international relations. The late twentieth century saw two paired technical-tactical developments the – prevalence of missiles as the primary weapon at sea and the dawn of the post-industrial production era. As such, offensive power is no longer proportionate to the price or size of a combatant, and mass production can no longer be expected to replenish combat losses in time.3

Sea control is about sinking these ships and aircraft, platforms that are growing in vulnerability and are harder to replace than their predecessors. A force that performs well in attrition will weaken, and in many dimensions of military power, perhaps even disarm an adversary. Destroying military assets that cannot be effectively replaced for years, and only after the political issues at hand have been resolved, grants sea control today a value well beyond its immediate military effects. The battlespace, concrete and conceptual, in which contenders will struggle for sea control thus needs to be carefully defined.

This article explores sea control at the tactical level of war in an age defined by precision-guided munitions and post-industrial production. It opens by defining sea control in terms of objective, means, and effect, and proceeds to identify the capabilities key to achieving it. After discussing how to exploit and maintain sea control once won, it concludes by reflecting on the best path to effective training. Ultimately, sea control depends on attriting enemy sensors and shooters through superior scouting and decision-making – both processes complicated by the fog of war and by enemy interference. The review here is cursory, and further exploration of this general topic and the subtopics broached will be constructive.

Sea Control in the Missile Age: The Scouting and Network Battles

Modern combat at sea remains sudden, violent, and shrouded in uncertainty. The increasing speed, range, and autonomy of precision-guided munitions (PGMs) and their associated sensors lends an advantage to the attacker.4 The fog of war persists: even when targeting information is available, uncertainty and human psychology often prevent its efficient exploitation. Electronic Warfare (EW), Cyber, deception, and anti-scouting capabilities will all play a role in expanding the fog of war, contra all predictions of “dominant battlespace knowledge.”5 Even superficial observation of trends in EW shows modern militaries are prepared to target sensors extensively.6

The net-centric force structures of modern great power militaries nest different types and levels of capability in different launch and scouting platforms. These networks may degrade gracefully under fire, but not in linear fashion.7 First, partial sea control can be said to exist when some platforms have been attrited (or when their force inventory is exhausted). Second, partial sea control can be said to exist when critical scouting capabilities have been denied, whether through attrition or (perhaps less likely, depending on the scenario) through non-kinetic fires. Either condition eases the problem of defending amphibious ships, merchants, and fixed sites on land by reducing options available to the attacker, conversely allowing air defense units to assume optimal dispositions against one or a few threats.

Sea control is about attrition. The long-range offensive power of nearly every platform in the missile age dictates this. The reconnaissance-strike complex composed of sensors –whether organic to the shooter or offboard – and missile systems of all kinds is increasingly able to reach out to hundreds of nautical miles of effective range.8 A place- (vice time- or method-based) maneuver warfare approach is not going to stop modern PGMs – only blinding the sensor or killing the shooter will do so.9

Sea control entails attrition; attrition in turn entails rapid and effective threat detection, combat ID (CID), targeting (inclusive of ROE), engagement, and battle damage assessment (BDA). In U.S. military parlance, this process is termed F2T2EA (Find, Fix, Track, Target, Engage, Assess). Whatever their name, all these processes will be opposed by an adversary seeking to slow one’s own Observe, Orient, Decide, and Act (OODA) loop.10 Given these underlying conflicts within the broader struggle at the tactical level, we can best understand them cut into two parts – a scouting battle for acquisition of targeting information, and a network battle for its exploitation.

The scouting battle entails the competition between reconnaissance-strike complexes –be they SAGs, carrier strike groups, aircraft, or any combination of these – to acquire targeting information. Electronic warfare, deception, and conventional weapons could all contribute to anti-scouting campaigns. Effectiveness in scouting relies on coordinating multiple platforms and techniques to maximize probability of detection and communication while minimizing the vulnerability of one’s own assets.11 Effective anti-scouting entails dispositions that are difficult for scouts to detect or to classify, early warning, rapid combat ID, and sufficient firepower at the right time and place to attrit reconnaissance platforms.

The network battle consists of the competition between reconnaissance-strike complexes for the use of targeting information. It is a race to make and communicate decisions, one where sabotage is also possible. A force well-postured for the network battle will rely on mission command, including austere C2 and pre-planned responses, emphasizing rapid and seamless transition between the paradigms of “structured battle” and “melee” that were well-identified by CAPT (Ret.) Robert Rubel in a 2017 article.12 At the same time, the force will use all available means – including communications jamming, deception, and other information operations – to slow the adversary OODA loop, delaying and diluting the impact of its discovery and targeting.

These twin lines of effort pay dividends for sea control. The force that “wins” the scouting battle – all other things being equal – will be in a better position to contend for sea control, winning timely and accurate targeting information while denying the same to the enemy. Advantage in the network battle allows a force to quickly respond to changing conditions, maximizing firepower – and, perhaps, surprise – through quick reaction, as well as maximizing resiliency through reducing dependence on top-down, unitary, and vulnerable C2 nodes.

The tactical dynamics of the missile age undermine the shaping approach. Substantial advantage accrues to the side that “attacks effectively first;” where anti-missile defenses of all types and ship survivability are sufficient if effective attack blunts counterattack.14 Several countries have made substantial investments in advanced ship- and aircraft-launched anti-ship cruise missiles (ASCMs), and consistently train for their employment.15 The highly centralized C2 seen in some navies also might reduce the scope of decision-making authority available to unit commanders.16 During a crisis with a peer competitor, it appears unlikely that either side could muster sufficient force to absorb a first strike should shaping fail.

Even against isolated PGM snipers, however, the shaping approach has significant drawbacks. Unlike the submarines of World War II, modern warships and submarines have effective firing ranges measured in hundreds of miles. Particularly the latter have likely improved their relative ability to avoid detection, if not to escape prosecution. Not all COs will be as easily intimidated as the Imperial Japanese Navy’s Admiral Kurita at the Battle Off Samar.  The forces needed to deter a professional and determined adversary would be better employed hunting that same adversary. Even once sea control is won, a lethality approach that emphasizes attrition remains primary.

A Tactical Action Officer (TAO) on watch at night onboard a destroyer acting as SAG commander (SAGC) confronts two empty large screen displays, their blue monotony broken only by the occasional merchant or commercial aircraft track. In searching for the enemy SAG, the TAO and the watchteam must be able to pick out the foe from environmentals and neutrals, satisfy rules of engagement (ROE), match weapon to target, win concurrence from the Commanding Officer and other appropriate legal authorities, and do all this quickly enough to “attack effectively first.”17 When this is done, the salvo away, the force must quickly conduct battle damage assessment (BDA) to determine if reengagement is needed. This is sea control in practice: a realm of ambiguity where human factors, especially level of knowledge, presence of mind, and sangfroid, are decisive in tactical effectiveness.

Training for sea control ought to reflect the reality of sea combat in the age of PGMs: that despite all technical developments, human factors continue to define war. The importance of winning the scouting and network battles, of blinding the enemy, of working inside his OODA loop, of deceiving him – all to the end of delivering the first effective attack – all of these pieces can be seen in “lessons learned” from SAG vs. SAG and similar free-play events in many U.S. and multilateral exercises. The extent they confront participants with the experience of the totality of combat – psychological and technical – will mean these events can prepare trainees well.

From a U.S. Navy standpoint, progress is evident. Scripted firing events are gradually being supplanted in favor of Live Fire With A Purpose (LFWAP) events mimicking real-world weapons employment conditions. A comprehensive and usable standard ruleset for SAG vs. SAG and freeplay events, and the explicit, fleetwide understanding that these mock combat events – vice scripted certification evolutions or PHOTOEXs – are the “main course” in major exercises would facilitate planning and maximize training value.

The tactical dynamics and political-military impact of combat at sea are mediated by technological trends, but human factors remain central to its actual conduct. Topics deserving further exploration include, among many others: to what extent does the OODA loop model so ingrained in U.S. and Western forces remain valid at sea in an age of semi-autonomous weapons? What capabilities and which tactics, techniques, and procedures provide the greatest leverage for the scouting and network battles? Which C2 constructs do so? Are there elements of the “dominant battlespace knowledge” concept that are not fatally flawed on their assumptions? The force that is prepared to ask these questions, answer them, and then incorporate lessons learned into training and practice will have the advantage in a near- to-medium-term struggle for sea control.

He participated in multiple Strike Group patrols, Combined, and Joint Operations in the SEVENTH Fleet AOR, coordinated successful live SM-2 firing exercises in 2017 and 2018 and led planning for MUSTIN’s role as SAG commander in MULTISAIL 2018. Lieutenant Humayun is a qualified Tactical Action Officer who has stood the watch both at Condition III and for Special Evolutions in a high-threat OPAREA.

All opinions expressed in this article are the author’s alone and do not represent those of the U.S. Navy, the Department of Defense, the U.S. Government, or any of their subcomponents.

9. Surprise and deception are not unique to maneuver warfare approaches, but are inherent in the maneuver paradigm. For comparison of various (mostly pre-missile age) approaches to deception, see Whaley, Barton. Stratagem: Deception and Surprise in War. Artech House, 2002.

2 thoughts on “Sea Control at the Tactical Level of War”