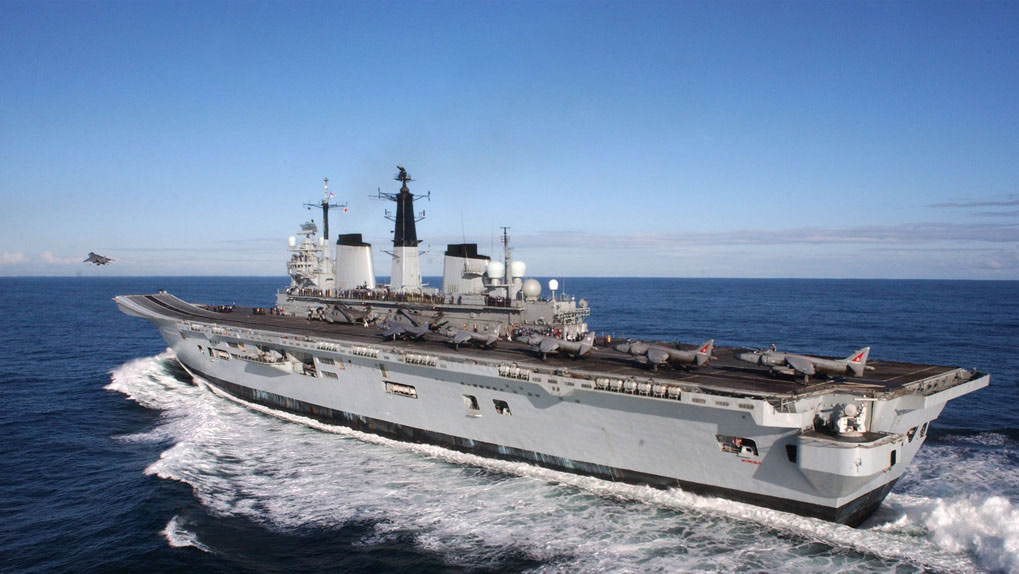 Someone recently turned the tables on me with a question about what “military effect” I was actually after when I argue for the concept of a Sea Control Carrier. What follows is an attempt to indicate the minimum capabilities of such a platform necessary to achieve any realistic sustained defence or offence. It’s not really based on a known threat, but rather a “theoretical” nation [albeit using Royal Navy models] with aspirations of international reach and influence based on a series of requirements to “fly the flag”, protect an area of investment, or launch 3Cdo [3rd Commando Brigade] into hostile territory (ish). It assumes threats from land, sea and air in all circumstances.

After some careful consideration I have come up with the following requirements:

My desire for 24-7 CAP is because I do not believe that Deck-Launched Intercept (DLI) will give a fast enough or far-reaching enough response in the future (see graph below). In addition, it “sizes” the requirement such that the ship can swing-role for rapid-response air support. The ASW capability is assumed to work in conjunction with a towed-array frigate. Now let’s work some rough math…

A total maintenance team of 240 men, along with around 60 further pilots and systems operators and another 10% for “management”. A total of about 330 airgroup personnel. Minimum.

However, I am asking for this airgroup to undertake three two-hour CAP sorties per day, per aircraft, forever (well at least for a couple of months). Regardless of how hard I try to push my head into the sand it simply isn’t going to happen. History has shown carrier air wings to deliver between one and two sorties per day over a sustained period so perhaps we can settle for 1.5 sorties per day and 16-18 jets.

The point here is that a small “Cavour-sized” carrier can only deliver about half of my requirement. In other words it can deliver the “jet” component, or daytime cover, or single aircraft CAP and ASW. Any CVL will therefore need to be supplemented with enough escort/support ships to sustain the required ASW capability.

The Fleet
Following from this conceptual CVL I’d now like to examine how the fleet could operate to provide sustained presence, defence, and ultimately offence. Much of the numbers following are for illustrative purposes only, again representing a “theoretical” nation:

Presence
We’ll begin with frigates. Thirteen of them. 3-4 of them in deep maintenance/refit and the remainder providing 85% availability. This gives us eight active ships, with two assigned to each of four key locations around the globe – rotating back-to-back – operating independently, policing, and flying the flag.

In addition we’ll need a number of tankers to sustain their presence.

Defence
This is the real point of this section. This is the ability to supplement the active frigate as local tensions rise in one of the four key locations. This supplement increases the area of control/dominance from a ~20km to ~200km radius using the Sea Control Carrier above.

We therefore require a sustained sea control capability, which can only come about with at least three Sea Control Carriers.

Furthermore, we have already identified that the CVL above cannot sustain the level of aviation that is required to totally dominate the area. We can assume that the CVL can support the jets and AEW capability, but we need other ships to operate the ASW squadron. Well, we already have a frigate with an embarked helicopter and in order to sustain any kind of operation we are going to need one of the tankers on station for much of the time.

This therefore puts the onus on the tanker to embark the remaining seven helicopters with hangar facilities for at least three of them. This is hardly a tanker. The ship that fits the bill is probably more akin to RFA Argus or an aviation optimised Bay class. This means dragging another ship along in order to provide sustained control of the sea.

We now have a frigate, a tanker, a carrier and an aviation heavy support ship on station.

Offence
Obviously the above task group provides a fair level of offensive air power, however, here I mean “offence” in the form of amphibious assault.

I’ll keep this relatively simple and just suggest that we need to sustain a single commando battalion in theatre or launch a heavy assault with almost all of 3Cdo. To this end we will need four amphibious assault ships all similar to the Rotterdam/Galicia design. These ships would generally be operated by the Royal Fleet Auxiliary (RFA) with a small contingent of Royal Marines so the assumption is that four such ships will provide three operational, one for each of 40, 42 and 45 Commando [battalions].

Again, the point is not to discuss force balance or numbers, but simply to indicate that these ships could double up as the aviation heavy support ships as required above.

All-out war would see all eight frigates on the front line operating the majority of the ASW squadron, therefore freeing up space on the assault ships to operate utility/lift helicopters.

Conclusion
What I have tried to do here is provide a minimal fleet design. It is not a fantasy fleet, it is simply an indication of how a fleet could be built to provide various levels of capability. The use of a small carrier keeps the cost minimal, but at a high price in terms of overall effectiveness. We are severely limited with our aviation assets because we have to “off deck” much of our sea control ASW squadron onto tankers and assault ships that would otherwise be operating utility/lift helicopters.

This means that our sustained offensive presence deploys almost zero utility/lift helicopters because the aviation space on the amphib is being used to operate the majority of the ASW squadron.

A larger carrier would be better, which I will cover in a second post entitled “CVF or LHD”.

2 thoughts on “Sea Control and the Minimum Capability of Carriers”