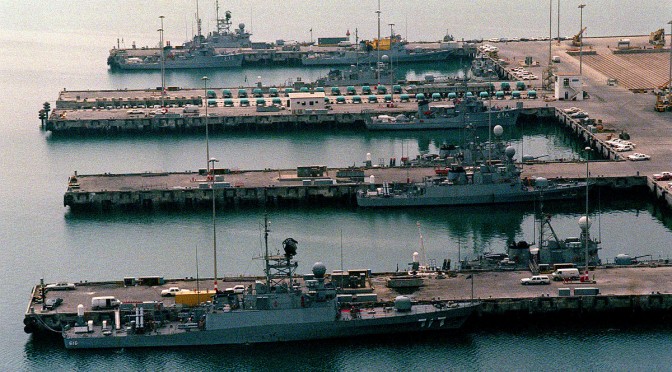 It appears Saudi Arabia is again looking to the US to build this new fleet, reportedly buying  four up-rated Lockheed Martin Freedom Class Littoral Combat Ships.  While these ships have been much in the news, they are only part of a much larger program.

In February Defense News reported that Saudi Arabia had sent a letter of request to the US Navy that outlined the entire program.  It specified:

This shopping list sounds remarkably specific. This suggest that they already have a good idea what they expect to buy.

Plans have firmed up for the four frigates. While they will not have the Aegis like radars they will have a, “…16-cell (Mk41) VLS installation able to launch Evolved Sea Sparrow missiles, and will carry Harpoon Block II surface-to-surface missiles in dedicated launchers, and anti-air Rolling Airframe Missiles in a SeaRAM close-in weapon system. The MMSC will also mount a 76mm gun… a Lockheed Martin COMBATSS-21 combat management system, which shares some commonality with the much larger Aegis combat system, and feature the Cassidian TRS-4D C-band radar.”

The design for the six smaller ships hasn’t been discussed openly, so this is a bit of speculation, but at least I think we can expect something like this. The video below, from Swiftship, recently appeared without much explanation.  The similarity in design to the Freedom class is striking and it claims to be a proven hull form. If Marinette Marine is too busy to build these smaller ships in addition to the LCS and the Saudi Frigates, having Swiftships build them might be a way have having them delivered relatively quickly and it looks like it might fit the description. Note there is no mention of an ASW capability for these ships (other than the ability to embark an MH-60R). This parallels the current fleet structure where only the four largest vessels have an ASW capability and the next largest class vessels do not.

Swiftships has a record of selling vessels through “Foreign Military Sales” and the vessel in the video shares a number of systems in common with the projected Saudi frigates including a 76mm gun, RAM missiles, MH-60s, and possibly Harpoon (they show only a generic representation of an ASCM).

A likely choice for the patrol boat is this one, eight of which were sold to Pakistan. Reportedly these 43 meter, 143 foot vessels can make 34 knots and operate a ScanEagle UAS.

Another possibility is this 43.5 meter vessel that was provided to Lebanon under FMS. 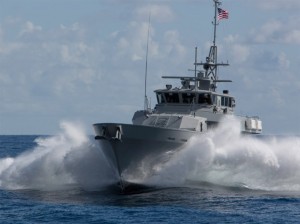 Both of these PCs have the capability to stern launch an RHIB.

10 “maritime helicopters” with characteristics identical to the MH-60R.

A request for ten MH-60Rs was submitted earlier and has been approved by the State Department.

I note that the 380 Advanced Precision Kill Weapons System (APKWS) semi-active laser homing 70mm rockets is exactly the number to fill twenty 19 round launchers. These weapons are probably an ideal counter to the much vaunted Iranian “swarm.”

These are almost certainly P-8s.

While there is no indication which system is favored.  This sounds like too many systems for Firescout.

ScanEagle or one of Insitu’s slightly larger systems seems more likely, and if the Swiftships Offshore Patrol Vessel video is any indication, it includes a ScanEagle launch and recovery.

This will be a major upgrade to the Saudi fleet that should allow them to maintain an advantage relative to the Iranian Fleet.