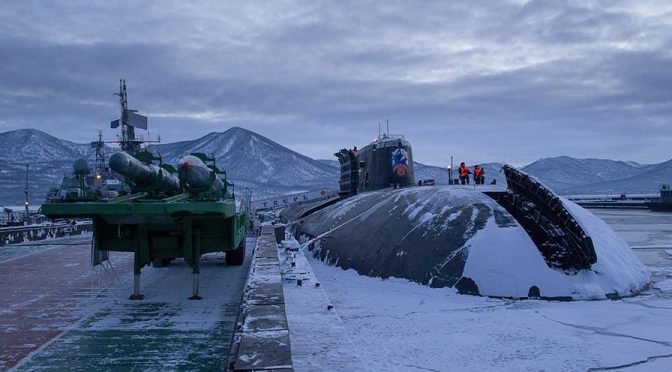 The following article was originally featured by the Macdonald-Laurier Institute for Public Policy and is republished with permission. Read it in its original form here.

During the Cold War, the geographical position of the Arctic and the technology available put the region in the geopolitical spotlight. The Arctic was the shortest flight path for Soviet and American intercontinental bombers between the United States and Soviet Union. Later, with the advent of ballistic missiles, the Arctic’s strategic relevance began to fade – only to be reignited in the 1970s with the arrival of nuclear ballistic missile submarines (SSBNs) and strategic bombers armed with long-range cruise missiles.

The United States cooperated closely with Canada to stop the bomber threat coming from Moscow. The end result was a number of early warning radar lines across Canadian territory, most recently the joint Canada-U.S. North Warning System (NWS) built in the late 1980s, as well as significant air defense (and later aerospace) cooperation evident in the bi-national North American Aerospace Defense Command (NORAD). By the 1980s, the U.S. Navy was also increasingly intent on penetrating the Soviet nuclear bastion in the Arctic with its own nuclear attack submarines.

The Soviet Union was itself directly exposed to strategic bombers located in Alaska. Looking at the strategic context until 1991, the USSR gathered a significant number of defense forces in the Soviet Arctic, going from advanced air defense systems in Rogachevo, Amderma, and Alykeland Ugolnye Kopi to submarines able to launch nuclear weapons from the Soviet Far East. The United States and the Soviet Union both conducted military exercises in the Arctic, and eventually had the technological capabilities to destroy each other multiple times. However, it was difficult for the United States to say if Moscow was trying to develop a defensive or offensive policy in that part of the world – although that uncertainty did not prevent the U.S. from moving decisively to try to mitigate this potential threat.

Moscow conducted an impressive number of nuclear experiments in the area. By the end of the 1980s, the USSR Northern Fleet had 172 submarines, including 39 SSBNs, 46 cruise missile submarines and 87 attack submarines, and between 1967 and 1993 Soviet and Russian submarines carried out a total of 4,600 training missions. However, looking at the size of the Arctic, the numbers are less impressive, and it seems difficult to know if the area was considered to be an outpost or a buffer zone, in so far as archives regarding Soviet nuclear weapons are still classified in Russia today.

After the break-up of the Soviet Union, Russia inherited almost all Soviet facilities and nuclear equipment, including in the High North. Does the Russian approach toward the Arctic differ from the Soviet one? Under then Prime Minister Yevgeny Primakov, supported by Russia’s first president Boris Yeltsin, Russia’s Arctic forces were almost entirely disbanded for economic reasons during the 1990s. The Kremlin did keep its SSBNs to ensure nuclear deterrence and a minimum presence in the area. But it also diminished the number of aircraft and anti-aircraft systems as well, the latter decision largely due to the difficulty with modernizing equipment needed to detect and intercept American bomber aircraft, such as the Northrop B-2 Spirit.

With the return of Moscow on the international stage, Russia’s new nuclear policy in the Arctic has become a major issue for the relationship between the United States, Canada, Northern Europe (NATO and non-NATO members) and Russia after the annexation of Crimea in 2014. Indeed, current Russian President Vladimir Putin considers the modernization of Moscow’s strategic nuclear forces and its Northern Fleet to be a state priority.

More than 80 percent of Russia’s strategic maritime nuclear capabilities is located in the Northern Fleet, mostly in the form of its ballistic missile submarine fleet. It is also focused on developing infrastructure needed to operate such capabilities, such as the refurbished military airfields in its northern region that will provide aerial support for its Northern Fleet. In the Russian Military Doctrine of 2014, the Arctic was highlighted as one of the three key regions for military development, alongside Crimea and Kaliningrad. And, since 2008, Russia has reestablished long-range aviation patrols and increased the presence and activity of the Northern Fleet.

Putin’s policy in the Arctic can be interpreted as partly an attempt to protect future economic and military interests of the Russian Federation. After all, Russia has significant economic interests in the Arctic and needs to protect them. More than 20 percent of the country’s GDP is produced in the northern part of Russia, with approximately 75 percent of oil and 95 percent of natural gas reserves located in the area. In addition, it also is a means to put more pressure on Washington and its allies (including Canada) in the context of the ongoing crisis in Eastern Ukraine. As well, it provides an opportunity to threaten (and therefore possibly deter) countries showing a growing interest for NATO membership, such as Sweden and Finland.

Russia has recently unveiled a new military base at Franz Joseph Land in the Arctic Sea, following its initial Northern Clover Arctic base on Kotelny Island, north of Siberia. The Franz Joseph Land archipelago had been abandoned in 1991 but the Russian Air Force decided to reopen Graham Bell Airfield (named the “Arctic Trefoil”) to protect Moscow’s interest in the area. However, Russia’s 150 soldiers are probably not enough to stop any foreign forces and control the 191 islands in this peninsula.

A recent article published at the Department of Geography at Laval University also underlines the limitations of Russian Air Force operations in the Arctic, pointing particularly at the relative modest number of air military patrols in the region compared to the significant number of intrusive patrols (bombers and fighters) close to Japan, Northern Europe, and the Baltics.

In that context, it seems difficult to say if Russia is able to conduct any large military exercises in the Arctic, due to the size of the region and the limited number of troops on the ground. A brief look at the equipment available like the Tupolev Tu-160 – a Soviet bomber produced in the USSR between 1984-1991 and upgraded by the Russian Air Force – shows their limited capabilities to conduct an attack against Alaska or Northern Europe from the area, although their development of long-range cruise missile technology could change that calculus.

The Russian Federation is also facing difficulties when it comes to submarines. The Russian Navy cancelled the modernization program for its venerable Typhoon-class vessel in 2012, and most of its newer Borey-class SSBNs are under construction and those vessels earmarked for the Northern Fleet (Knyaz Pozharskiy, Generalissimus Suvorov) won’t be ready until 2020. Indeed, the Yury Dolgorukiy is the only submarine located in the Arctic at the moment.

Despite Putin’s stated interest in strengthening the Northern Fleet, this situation should remain the same for the foreseeable future – especially following Moscow’s revised funding scheme for the Arctic. The expected budget approved for the military in the Arctic until 2020 is 17 times lower than the original sum. This arises from Russia’s current economic crisis, brought on not least by international sanctions after its military intervention in Ukraine.

In this context, rather than fixating on Russian activities in the Arctic, the United States and Canada should continue to focus the brunt of their attention on Europe and Syria – where the Russian presence remains far more intrusive, robust, and ultimately destabilizing.

Michael Eric Lambert received a PhD in History of Europe and International Relations from Sorbonne University, France. He is Founder and Director of the Caucasus Initiative, a new independent and unaligned European Policy Center with the mission to analyze contemporary issues related to de facto states and the Black Sea area.