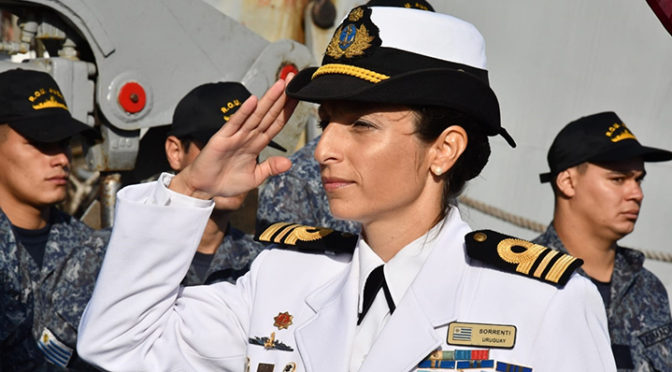 A historical milestone was reached in Uruguay as Capitan Valeria Sorrenti became the first female commander of an Uruguayan Navy vessel. With that said, it is important to keep in mind that she is only the latest example of a growing trend. In recent years there were a number of positive “firsts” when it comes to female naval officers taking command of ships among various Latin American navies, a trend that will hopefully continue.

At a ceremony held in Montevideo in early March, Captain Sorrenti became the commander of Audaz (ROU 34), a Kondor II-class minesweeper. The ship was commissioned in the South American country’s navy in the early 1990s, after previously serving in the East German Navy. The officer is no stranger to Audaz as she previously served as the ship’s second in-command. With its new commander, Audaz will be tasked to monitor Uruguay’s territorial waters, with a focus on combating maritime crimes (particularly illegal, unreported, and unregulated fishing), conducting mine-sweeping exercises, and performing search-and-rescue operations.

Such tasks are problematic for the Uruguayan Navy these days since, as the author discussed in a 2016 analysis for CIMSEC titled, “The UNCLCS Ruling and the Future of the Uruguayan Navy,” the country has one of the oldest fleets in South America. This presents a problem when it comes to the multiple tasks the fleet has to perform within territorial waters and also abroad, as Uruguay has an important presence in Antarctica.

The renewal of the fleet has been slow and revolves around the acquisition of small vessels. In August 2019, the U.S. delivered “a second batch of two Metal Shark 32-ft (9.8m) fast patrol boats … to the Uruguayan Navy Comando de Infanteria de Marina (Marines),” according to Jane’s Defence. That brings the total fleet of Uruguayan fast patrol boats to four platforms. In late 2018, the Navy also acquired two German-made search-and-rescue vessels, called Isla de Flores (ROU 51) and Isla de Lobos (ROU 52).

For years, the Uruguayan Navy has attempted to acquire new offshore patrol vessels to modernize its fleet, but this has yet to occur due to the defense ministry’s limited budget. Nevertheless, with commanders like Captain Sorrenti at the helm, the Navy may make the most of what it has.

The promotion of Captain Sorrenti does not occur in a vacuum as throughout the past decade other female personnel have been promoted to positions of command throughout various Latin American navies.

Furthermore, in January 2018, Captain Casandra Silva became the first female commander of a Peruvian Navy vessel – the offshore patrol vessel Rio Cañete (PM-205), manufactured by the Peruvian state-run shipyard SIMA. Under her command, Rio Cañete intercepted a vessel in Northern Peru, which was reportedly carrying 1,850 kilograms of cocaine. A year later in January 2019, 2nd Lieutenant Carolina Cuadras was named the captain of the patrol boat Salinas (LPC-1816), which has its home port in Iquique, Northern Chile. Cuadras is the first woman to obtain the command of a ship in the Chilean Navy.

It is also worth noting that female officers are also in command of naval facilities. Captain Nora Benavides Luna is the first female commander of a Peruvian naval base, located in Pucallpa port, in the Peruvian Amazon. Finally, there are female commanders of civilian ships, such as the tug boat Monte Cristi in the Dominican Republic which has an all-female crew.

On the other hand, one tragic case is that of Captain Eliana Krawczyk, Argentina’s first ever female submarine officer. Sadly, she was aboard the Argentina submarine ARA San Juan when it disappeared in November 2017. She and the other 43 crew members of the boat were lost.

Discussing the history of women in Latin American militaries in general, or navies in particular, would require a volume to do it proper justice. Focusing on senior officers, there are already women who have managed to achieve high-ranking positions in various Latin American navies, but their numbers are few. There are two in Brazil, including Rear Admiral Dalva Mendes and Rear Admiral Luciana Mascarenhas da Costa Marroni, and Rear Admiral Mayra Alicia Díaz of the Dominican Republic’s Navy. Another female admiral can be found in Venezuela, Admiral Érika Virgüez Oviedo, who also serves as a deputy defense minister for the regime of Nicolas Maduro.

In an interview with the author, Vice Admiral (ret.) Omar Eduardo Andujar-Zaiter of the Dominican Republic’s Navy (DRN), highlighted how in the Caribbean nation’s navy there are already female personnel whose ranks range from ensign to admiral. He added that while currently there are no female commanders of vessels, “it’s just a matter of time before this occurs.”

Hopefully, with more young women enlisting and many already currently deployed aboard ships, more Latin American vessels will be commanded by female officers in the near future. One example can be found in Colombia, where in 2018, for the first time an overwhelming majority of female cadets  (51 in total and three men) were aboard the navy’s training vessel ARC Gloria as part of a training exercise. Hopefully several of these young cadets will have the opportunity to command their own ship in the coming years.

One clear obstacle preventing more women from obtaining high-ranking positions is that navies, along with other services and careers, have limited the types of fields that women can join, hence limiting how high up the chain of command they can go. A December 2019 article in Americas Quarterly, entitled “Why It’s Essential to Have More Women in Latin America’s Militaries,” explains how “high-ranking female officers in Latin America are few in number. Some have served as doctors, teachers and computer scientists, but training for roles directly involved in security is still almost exclusively left for males.” A March 2020 report in the BBC’s Portuguese service about the history of women in the Brazilian Navy mentions how Rear Admiral Mendes focused on health services while Rear Admiral da Costa Marroni concentrated on engineering and telecommunications.

Without a doubt there is still a long way to go for greater gender equality amongst Latin American defense forces. An April 2019 article by Plaza Publica discusses the lack of female generals (or admirals) in the Guatemalan armed forces. Gender discrimination is still an ever-present problem that needs to be tackled.

It is important that female navy officers are now commanding vessels, not only because of this achievement in and of itself, but also because these types of posts will help them advance even more in their careers.

The Uruguayan Navy now has its very first female ship commander – an important achievement for  Captain Sorrenti, the Uruguayan Navy, and Latin American navies in general. There are already female admirals in the region, but female commanders of vessels are still a rarity. Hence the importance of female officers commanding ships in Argentina, Brazil, Chile, Colombia, and Peru cannot be overstated.

As Latin American navies undergo modernization, with a focus on operating more domestically-manufactured vessels and submarines, it is similarly important to monitor who is commanding them. “Female naval personnel in the DRN have maintained the strictest standards of conduct,” explains Vice Admiral Andujar-Zaiter, thanks to which false paradigms and orthodox myths about women in the armed forces have been debunked. Without a doubt, only the most capable officers should lead a ship, and female Latin American naval officers are proving that they are more than up to the challenge.