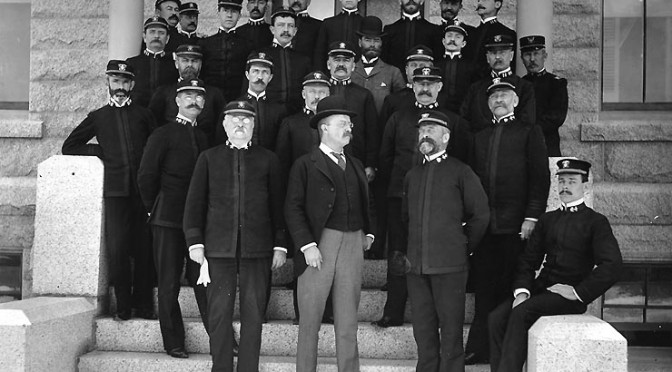 This post was provided by Dr. John T. Kuehn in response to the series on CIMSEC and The Bridge, Personal Theories of Power. Dr. Kuehn is a member of the U.S. Army Command and General Staff College faculty and the author of Agents of Innovation: The General Board and the Design of the Fleet that Defeated the Japanese Navy and A Military History of Japan: From the Age of the Samurai to the 21st Century.

It is just here that the Institute might render important service to the profession by enlightening the public mind of the Navy on this subject, through the medium of essays and frequent discussions. — Admiral Stephen B. Luce, 1888, annual address as President of the U.S. Naval Institute

My personal theory of power, at least for the moment, has two parts. The first part comes from an idea broached by Mark Mandeles known as “levels of analysis.” The second part has to do with my own approach to exercising such power in ethical and, hopefully, altruistic ways in my own life through education, specifically educating minds to include the historical perspective. In other words, the theory followed by its application and execution in my own case.

Levels of Power — An Analysis

First, levels of analysis describe human interactions in terms of relationships. Generally, these levels fall into three groups: the individual, organizational, and institutional. Institutions are near the very top of social hierarchies and, in the words of Douglass North are, “society’s rules of the game.”[i] Translating this to a personal level, each human interaction occurs within these sorts of contexts and, therefore, for each of us, each interaction—as an individual, as a member of an organization or small cohesive team, and as a member of a larger institution—is pregnant with both possibility and limitation, occasionally leading to brilliant success or utter catastrophe. We influence others, wield our power as it were, in these situations and in different ways. Most interactions are at the personal level, but within teams and organizations, we behave a bit differently based, again, on the possibilities and limitations of our personal influence in that particular context. For example, parents exercise individual level power all the time with their children. At the organizational level we often think of our team, unit, or organization associated with employment. As one’s responsibility increases, so does the level of interaction and the ability to exercise personal power at the organizational level. However, for the audience that is probably reading this, we have folks who occasionally (or more often) exercise their power within institutional settings, as leaders of powerful institutions—for example Admiral Jonathan Greenert exercising his influence and authority as the US Navy service chief or David Petraeus when he was director of the CIA.

Education of the Historical Perspective

Back in the turbulent 20th Century an American historian named Thomas Bailey wrote A Diplomatic History of the American People. Bailey argued that the American people, through the power of public opinion, have always (one might say traditionally) exerted a profound influence on the foreign policy of the United States.[ii] This raises the issue of how does one influence the public opinion of the American people? N.A.M. Rodger dealt extensively with how the public mind is influenced by historical narratives and myths. He found that, contrary to perhaps conventional wisdom, Americans do use history to inform their public thinking, but that most of this history is flawed, wrong, or obscures what might have value coming to grips with the human past.[iii] I contend that the historical approach to influencing the public mind is not something that needs doing, rather it is something that needs doing correctly.

For Clausewitz and Mahan theory literally was study.

Minds as different and culturally divergent at Carl von Clausewitz, A.T. Mahan, and Mao Zedong all shared one trait in common when it came to military theory—theory should include study and when it came to war that study should be military history. For Clausewitz and Mahan theory literally was study.[iv] It is all well and good for the military professional to create his or her own theory by doing this (precisely what this series of articles is doing, after all), but how does this translate in power and influence? One means is through education, and not just military professionals or governmental elites, but the public. They get a vote.

For me it involves teaching, engaging if you will, with history as a means to educate the public mind—with individuals, groups, and in larger settings, at all levels. And so I teach primarily military and political history—at Fort Leavenworth, for Norwich University, at University of Kansas, for the Naval War College fleet seminar program, and frankly at any opportunity I get.

A theory is useless unless one employs it in a practical and daily manner.

One thought on “PTP Response: Levels of Interaction, the Historical Approach and the Public Mind”