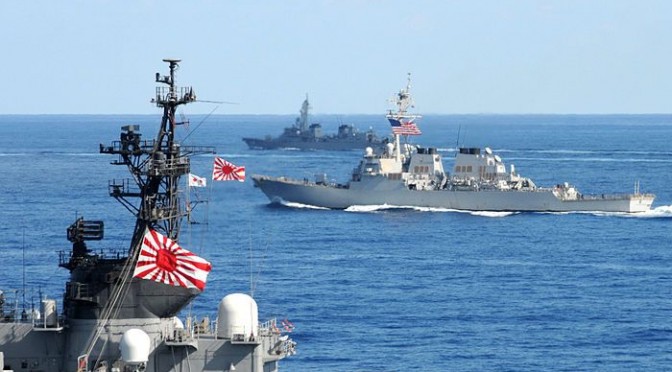 Welcome to Part Two of the October 2015 Member Round-Up, covering the second two weeks of the month. Over the past two weeks the U.S. freedom of navigation operations (FONOPS) in the South China Sea have dominated the attention of the maritime security community. Although the incident was a significant development in the region, CIMSEC members have focused on several other international maritime issues in addition to the FONOPS. These issues include Russian operations in the Middle East, Canada’s blue-water naval capabilities, strategic alliances in the Indo-Pacific and features of the U.S. Navy’s procurement strategy requirements.

Beginning the Round-Up at The National Interest, Scott Cheney-Peters discusses the necessity of U.S. FONOPS directed at China’s artificial islands in the South China Sea. Mr. Cheney-Peters explains that the U.S. position was twofold; it was critical to uphold commonsense interpretation of the U.N. Convention on the Law of the Sea while also reassuring commitment to regional allies concerned with China’s growing military capabilities. Mr. Cheney-Peters also explains the FONOPS repercussions and implications in an article at Sputnik.

Bryan Clark is interviewed at the Center for Strategic and Budgetary Assessments concerning the U.S. Navy’s freedom of navigation maneuvers and the potential consequences of such operations. He explains the possibility that these U.S. operations may initiate FONOPS response equivalents off the U.S. West Coast from PLA-N vessels. However, Mr. Clark also notes that inaction would abandon sovereignty disputes over the artificial islands ceding the region to the Chinese, a circumstance at odds with regional U.S. interests.

Mira Rapp-Hooper, at Lawfare, explains the U.S. FONOPS in the South China Sea through an international law context. The objective of her article is to outline the key legal and factual features of freedom of navigation while accurately describing the relationship between the military operation itself and maritime law. Also following a legal perspective, Alex Calvo for The Asia-Pacific Journal provides a comprehensive analysis on the ongoing legal dispute in the South China Sea. Mr. Calvo explains that the arbitration case currently being held in the Netherlands will contribute to the future dynamic of the entire South China Sea region and the ability for international law to resolve territorial conflicts peacefully and without recourse to military options.

Concluding the Round-Up’s discussion on the South China Sea FONOPS, James Goldrick at The Interpreter discusses the political and strategic need for Australia to assert freedom of operation throughout China’s artificial island network and its corresponding contested waters. Mr. Goldrick maintains that Australia should dispatch a naval force to operate in the vicinity of the Chinese artificial islands to demonstrate commitment to upholding international law and support for regional allied interests.

Darshana Baruah, at Offiziere, discusses the developing relationship in the Indo-Pacific between India and Australia. The article explains that the recent completion of the first bilateral naval exercises between the two countries indicates an aim to strengthen interoperability between their respective navies for the purpose of increased maritime security. Further to this, Ms. Baruah identifies the U.S. rebalance to the Asia-Pacific and the rise of China as having contributed to geopolitical tensions in the Indo-Pacific region, which has resulted in strategic opportunities for Indo-Pacific actors to collaborate in bilateral or multilateral arrangements.

Bryan Clark, before the House Armed Services Seapower and Power Projection Forces Subcommittee, argued that the U.S. Navy must increase development of advanced undersea systems to sustain American dominance in undersea operations. Mr. Clark explains that U.S. undersea warfare capabilities face the threat of being effectively challenged as a result of new detection technologies and quieter submarine fleets being developed by U.S. competitors.

To conclude Part Two of the October Member Round-Up, Ken Hansen for The Conference of Defense Associations Institute discusses the loss of Canada’s two primary logistical ships and the implications the loss will have on the Navy’s operations. Mr. Hansen explains that the decommissioning of the HMCS Preserver and the major fire onboard the HMCS Protecteur has entirely eliminated the Navy’s ability to conduct global force projection operations due to a lack of at-sea replenishment. Mr. Hansen explains that the Canadian Navy has acquired Spanish and Chilean logistical ships for temporary use for blue-water training operations and to maintain task group readiness throughout the logistical ship replacement process.

Members at CIMSEC were also active elsewhere during the second part of October:

Sam Cohen is currently studying Honours Specialization Political Science at Western University in Canada. His interests are in the fields of strategic studies and defence policy and management.