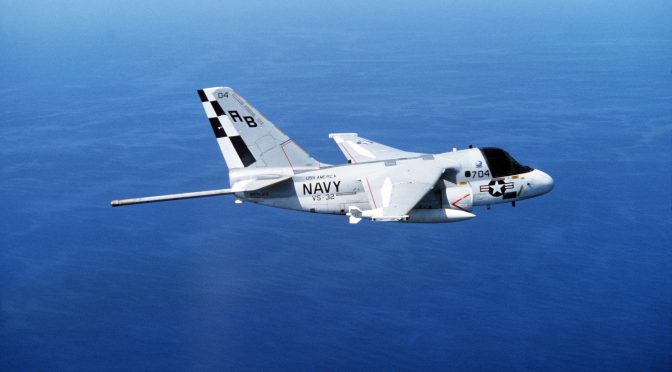 Imagine a day sometime in the near future where tensions between the United States and Russia are high and ships are at sea, ready to strike each other at a moment’s notice if given the word. As his ship glides to the surface of the ocean, the enemy submarine commander raises his periscope and with it the electronic surveillance antennae. It picks up multiple signals of U.S. aircraft in the immediate vicinity. But the commander is not worried. These aircraft, their radar, and their weapons are optimized for attacks against land targets; they won’t see his periscope, and even if they did, they wouldn’t have the weapons to do much about it. As long as he can avoid U.S. ships and submarines, which are spread out and in short supply, he knows he and his comrades have the upper hand in gaining control of the sea. As he leaves the surface, he works unimpeded toward his target, the American aircraft carrier.

At the same time, hundreds of miles away, a U.S. submarine commander is moving toward the enemy’s surface action group. He knows if he can get close enough and sink these ships, he can help ensure control of the sea for the rest of the force. Suddenly, the sound of weapons dropped from enemy helicopters fills the ship. He runs deep and aggressively, maneuvering to negate the threat. But in doing so, he loses contact with the group. And without an ability to shoot the helicopter, he misses an opportunity to take down an archer, who will now be able to shoot future arrows at him and his compatriots.

Ten years ago, this scenario would have been a work of pure fiction, unimaginable to most national security experts and military leaders. But today, the rapid spread of technology, the rise of near peer competitors, and the proliferation of advanced weapons make this scenario more plausible than ever. If the Navy is to counter the above scenario, it must start emphasizing sea control while retaining power projection capability. That change will require the Navy to accelerate its approach to this mission set, both in strategic terms of shifting mental focus and in more tactical terms of rapid repurposing of current platforms and payloads. While the Navy works to determine its future force structure, it must innovate beyond the traditional roles that ships and aircraft currently play. Designing and building new naval platforms takes time we don’t have, and there is still abundant opportunity to make the most of existing force structure. Fortunately for the Navy, histories of previous wars are a good guide for future action. World War II is an excellent model in particular, but the Navy must first recognize the historical context of its current predicament.

Bringing the Navy Back to the Sea

Alfred Thayer Mahan wrote extensively on how nations throughout history have used control of the seas to spread national power by ensuring freedom of trade and access. Over the course of the last century, the Navy’s primary focus of force application has shifted from sea control to power projection.

Arguably, the battle for control of the seas culminated in WWII, when massive navy-on-navy engagements raged in enormous clashes such as the Battles of the Atlantic, Midway, and Leyte Gulf. Navy strike groups were challenged by Axis Powers throughout the world’s oceans.

Following WWII, the U.S. had a massive navy and no real threat to its control of the oceans. The Navy and the nation were now unsure of the Navy’s role in this new world. The Navy received assistance from a 27-year-old theorist, Samuel Huntington. Writing in 1954, he had a clear vision for how the Navy should evolve in the second half of the 20th century: “Its purpose is not to acquire command of the sea, but rather to utilize its command of the sea to achieve supremacy of the land.” The Navy began shifting its focus to power projection, refining amphibious warfare techniques, developing a long range land attack missile, and building generations of air wings capable of delivering ordnance ashore. Even so, as the Cold War intensified and the Soviet Navy grew throughout the 50’s and 60’s, this focus ashore was balanced by the continuing requirement of maintaining control afloat.

Following the end of the Cold War and the dissolution of the Soviet Navy, the U.S. Navy’s focus on sea control diminished and the pendulum swung squarely over to power projection. Anti-surface missiles were removed from ships, Trident missile submarines were converted to fire Tomahawks, and the carrier’s S-3 Viking anti-submarine aircraft were stripped of much of their anti-submarine warfare gear and were later retired. Major force structure investments were made in ships geared towards littoral power projection such as the LCS and Zumwalt-class destroyer. Generations of Sailors during the Cold War were trained to achieve sea control – it was part of their DNA. When the Cold War ended, and with it the Soviet Navy, that DNA withered away.

As Bob Dylan tells us, once again, the times they are a changin’. The world is returning to a period of great power competition, and other nations’ desire to influence the world stage is forcing the Navy to rethink its focus. In the coming decades, the U.S. Navy may not have its current luxury of safely traversing the world’s oceans and projecting power. The rise of foreign capability could threaten carrier strike groups when they leave their harbors. The Navy must expand its focus from the last 25 years of projecting power, and strengthen its historic mission of sea control.

When trying to convert this shift in focus to the platforms that will execute sea control, it is time to heed the old dictum, “If you want a new idea, read an old book.” Just as the Navy had to do in WWII, it is time to focus on repurposing platforms it already has rather than relying on new platforms.

Looking back to its height of sea control capability, the Battle of Midway in WWII, carrier air wings (at the time known as carrier air groups) consisted of about 72 aircraft, one squadron each of dive bombers, fighters, torpedo bombers, and scout planes (which could also carry bombs). Compare that with today’s air wing. While the number of aircraft is about the same, its composition has changed dramatically, with four fighter/attack squadrons, one electronic attack squadron, one command and control squadron, and two helicopter squadrons. The biggest difference is the shift in focus of the air wing from fighting other navies for control of the seas to a focus on delivering power ashore.

At over 40 years old, the USS Nimitz is the oldest carrier in the U.S. inventory. The reason she has survived is due to upgrades to her air wing. There is debate currently over whether the Nimitz, and follow on carriers are still valid in a world of anti-access and area denial. This debate centers on the Navy’s role in power projection but speaks little to its return to sea control. While the carriers are still the best platform for delivering power without the need for foreign basing permissions, adding an anti-submarine and anti-surface role to its newest fighters is necessary. Similar to efforts by the surface warfare community to modify the SM-6 anti-air missile for strikes against ships, the Navy should modify those ASW and ASUW weapons currently used by the MH-60R helicopter for use by its fighter-attack jets. Just as in WWII, not all aircraft would be configured for surface or subsurface missions, but providing that latent capability will certainly ensure enemy ships and subs will think twice when they see the radar signature of a U.S. fighter.

Submarines are very effective at what they do – sinking other submarines and attacking surface ships – but many potential adversaries have fleets of helicopters designed to hunt them. Simply giving subs a basic anti-air warfare capability against these platforms would certainly give adversaries cause for concern. This system already exists in the German Navy. The Interactive Defense and Attack System for Submarines (IDAS) is currently being built for the German Type 212 submarine. With a 12-mile range, it will certainly make helicopters think twice as they drop their buoy search patterns. Submarine attacks against aircraft are not a new concept. In WWII, 120 Allied aircraft were shot down by German U-Boats.

Military Sealift Command (MSC) is experiencing great success in expanding the role of its fleet, and has been a leader in creatively repurposing existing platforms. MSC has added intelligence, surveillance and reconnaissance, and command and control capabilities to platforms such as the Expeditionary Fast Transport (formerly Joint High Speed Vessel) and the dry-cargo/ammunition ships (T-AKE). Marine Forces Pacific has experimented with the T-AKE extensively, using the ship for low-end operations, and even as a potential command and control platform. The MSC has shown there is a lot of opportunity in our current fleet. We just have to be creative.

As the challenges on the world’s oceans continue to rise, the challenge of sea control rises with them. With rapid repurposing of various platforms and payloads, the Navy can quickly adapt and overcome if and when required to fight and win this nation’s wars. By looking back at history, sometimes we can find the tools for the future.

Captain Robert N. Hein is a career Surface Warfare Officer. He previously commanded the U.S.S Gettysburg (CG-64) and the U.S.S Nitze (DDG-94). You can follow him on Twitter @the_sailor_dog. The views and opinions expressed are his own and do not reflect those of the Navy or the Department of Defense.

One thought on “No Time To Spare: Drawing on History to Inspire Capability Innovation in Today’s Navy”