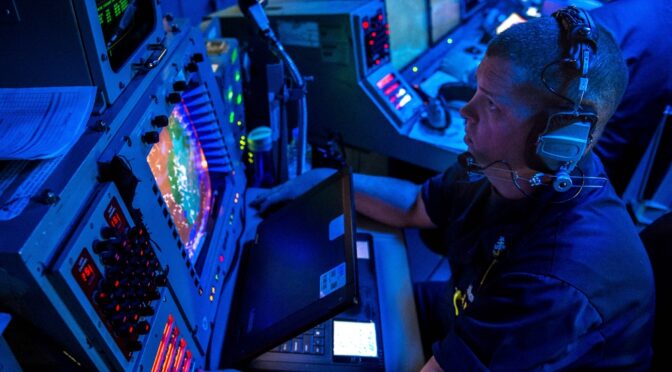 It has been nearly 14 years since the Navy joined four officer restricted line communities (intelligence, cryptologic warfare, meteorology/oceanography, and information professional) together to form the Information Dominance Corps, later renamed the Information Warfare Community in 2016. Full disclosure: In 2008 I was among a small group of officers asked to help on the early concept papers for alignment, and along the way participated in other initiatives to shape it. Initially I found the idea intriguing and potentially beneficial for the Navy from a training, acquisition, and resourcing perspective.

Gradually, however, I came to oppose it, or at least opposed including my community (intelligence) in it. It is now more apparent than ever that the information warfare community has not been, on balance, a good bargain for all four restricted line communities. This outcome is not surprising for several reasons, but none more so than this: Despite what senior Navy leaders may have said about information warfare over the past decade or so, what they have done and continue to do reveals that they do not believe information warfare is a warfighting domain on par with the traditional warfighting communities.

Navy leaders from the primary warfare communities—surface warfare, aviation, submarine warfare, and special warfare—still treat information warfare as a set of supporting services, albeit of increasing importance. This has led to the situation in which the information warfare community now finds itself a rhetorical prince, but a bureaucratic pauper. Its leaders are losing control of its destiny.

How did this happen? To answer that, one must rewind the clock a bit. By the late 2000s, the digital/information age was well into its second decade and the overarching premise for this organizational change was that officers and sailors with expertise in information-centric disciplines should have more influence in running the Navy. Information warfare needed to be seen and treated on the same level as traditional “platform” warfighting communities, such as aviation and surface warfare. Joining the four information-centric restricted line communities (plus a small quasi-community called the space cadre) would give information warfare the heft (budget and personnel control and perhaps most important, more flag officer billets at the expense of traditional unrestricted line warfare communities) to have influence commensurate with its importance to future warfighting. In a large bureaucracy like a military service, real power mainly accrues to those with control of money and people.

Conceptually, information warfare has always been problematic, evidenced most notably by the Navy’s continuing struggle to define and write coherent doctrine for it. No rigorous mission analysis preceded the major organizational changes. Instead, they seemed to rely on paper-thin power point briefs, exhortations, platitudes, a frenetic impatience fueled by the fear of missing out on digital innovation, and a giant leap of faith. But it was a rocky ride from the beginning, with the conceptual flaws and half-baked organizational shifts proving, time and again, to be houses of sand. Nevertheless, at each roadblock in the journey to be a true warfighting community, information warfare leaders could not avoid the sunk-cost fallacy and refused to revisit the underlying rationale and foundational concepts. Instead, one more organizational tweak or rebranding would do the trick to finally place the new community alongside its unrestricted line brethren, it was believed (or proffered).

Today, the Navy information warfare community is not an unrestricted line community in practice, but it is run predominantly by traditional unrestricted line officers. A submarine warfare officer is the Deputy Chief of Naval Operations for Information Warfare and the Director of Naval Intelligence, an aviator commands the U.S. Tenth Fleet/Fleet Cyber Command, the Tenth Fleet deputy commander is a submariner, and the Fleet Cyber Command deputy is an aviator. In fact, an intelligence officer has only been the Director of Naval Intelligence for two of the past eleven years and an information warfare officer only four of those eleven. Four of the seven commanders of the U.S. Tenth Fleet/Fleet Cyber Command have been unrestricted line officers.

Meanwhile, members of Congress and civilian leaders in the Department of the Navy are so frustrated with the information warfare community’s inability to cultivate a real cyber warfare cadre that language in the draft fiscal year 2023 NDAA requires the Navy to develop one separate from the information warfare community, removing entirely its responsibility for cyber warfare. Recently, the Chief of Naval Operations told Congress the Navy will develop a separate cyber warfare designator. It is not clear how this new community will be formed or where it will reside in the Navy’s structure. And, the final NDAA language that comes out of conference this fall may more severely restrain the Navy’s flexibility and could even result in the Navy divesting completely from the cyber warfare mission. Regardless of the outcome, however, that Congress has become so intrusive in managing Navy cyber warfare is a stunning vote of no confidence.

Early Navy information warfare leaders bear their share of responsibility for this disturbing plight. They could not resist indulging in the irrational exuberance of the digital technology craze in the mid 2000s or the temptation to grab more power by subsuming the four communities’ competencies under the grand, overhyped, and flawed idea that they are all just doing “information” stuff. The four information warfare communities all collect, manage, and use information, but for strikingly different purposes.

No one would seriously contend that a NASCAR driver, a school bus driver, and a fire truck driver are all at root in the gasoline-consumption business. Justifying that naval intelligence, cryptologic warfare, information professional, and meteorology/oceanography personnel are all in the information business required a lot of hand-waving when the tough questions came forth. It also exalted the information generalist and relegated the importance of niche expertise, such as cyber operations, to something short of a primary objective. For the Navy, that mistake has come home to roost with the aforementioned cyber warfare problem.

As Erik Larson explained in his excellent 2021 book, The Myth of Artificial Intelligence: Why Computers Can’t Think the Way We Do, in the mid 2000s the hype surrounding artificial intelligence and machine learning was running at a breathtaking pace. Adjectives and metaphors such as exponential, revolutionary, and game-changing littered popular tech literature, corporate strategies, vision statements, speeches, podcasts—just about any medium for any organization to prove to its shareholders, followers, customers, and members that it was attuned to the digital innovation culture. Leaders in all organizations—and those running the military were no exception—could be forgiven for believing they were already behind. Fear of missing out, from an innovation standpoint, permeated the mid to upper reaches of the Navy. There was no time for calm, deliberate, and clear thinking ahead of organizational changes. The mantra became move fast and figure it out as we go.

While understandable, this sentiment-turned-imperative resulted in some shortsighted and counterproductive organizational changes. What triumphed early and quickly became impossible to challenge was the view that information, writ large, was a coherent and grand warfighting domain that required information warfare generalists to run it. Alarms were raised that such a shift would weaken the individual community specialties. Assurances to the contrary were never convincing. The fact that today, more than a decade later, the information warfare community is led primarily by unrestricted line officers and is in real danger of losing perhaps its most important specialty from a warfighting perspective (cyber warfare) should at least prompt some introspection on whether the generalist concept was the wrong model.

Yet when Navy and joint commanders at the operational and strategic levels have had to choose between information warfare officers with a generalist resume and those well-regarded for some specialty, such as real expertise on China, they have mostly valued the latter. As a case in point, the newest Indo-Pacific Command Director for Intelligence spent years as an attaché in both China and Taiwan, most recently as the Senior Defense Attaché in Beijing. His specialization could not have been more focused, yet he is the man the commander wanted, rather than a junior information warfare flag officer with a broad information warfare resume. Why would a mid-grade Navy intelligence officer not look at this example and wonder whether he or she should attempt to replicate the specialized career path, assuming he or she joined the intelligence community with a genuine passion to be expert on the threat?

Welcome to the Information Warfare Subcommunity

Friends assure me that while this may be true today, future generations of information warfare officers will have the broad background necessary to regularly, if not exclusively, hold these positions. I am not convinced. For starters, from an officer accession policy standpoint, the Navy is mostly handling information warfare the way it did the four information-centric restricted line communities. For example, this year the Naval Academy and Naval Reserve Officer Training Corps (NROTC) commissioned only one intelligence officer who was physically qualified to commission into the unrestricted line communities. Not one each. One total. The cryptologic warfare community does slightly better, but not much. NROTC is poised to finally get more information warfare commissioning slots in the coming years, but for the most part, information warfare will probably remain an officer accessions sideshow at the premier officer commissioning programs.

There are some benefits to the organizational merger, such as having a Navy information warfare type command responsible to man, train, and equip the four communities. However, an information warfare type command could have been established while retaining the specialist culture and operational structure of the four communities. It is simply difficult to conclude that naval intelligence is better served in a construct in which the Director of Naval Intelligence is rarely an intelligence officer.

Bill Bray is a retired Navy captain. He is the deputy editor-in-chief of the U.S. Naval Institute’s Proceedings magazine.

10 thoughts on “The Navy Information Warfare Communities’ Road to Serfdom”