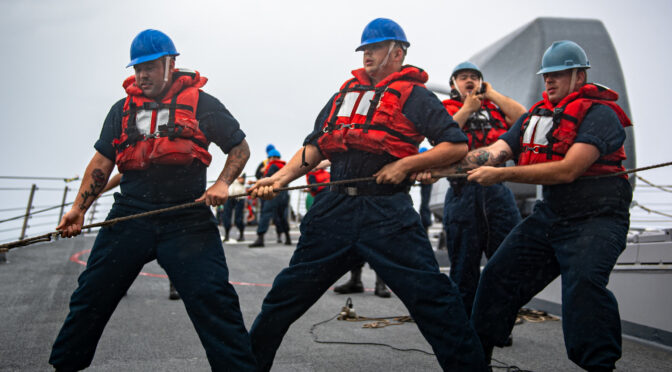 Last week, CIMSEC published a series of articles focusing on the human factor of maritime and military affairs. These articles covered a wide range of topics, highlighting the complexity of the challenge of enabling the people of the maritime services to be the best they can be.

Many commentaries in the national security space lament personnel issues as sporadic difficulties that can be expediently solved via easy policy tweaks. For instance, it might be enticing to solve recent recruitment challenges with larger signing bonuses. While multiple of the articles in this series suggest policy-based solutions, one novel and important contribution is that all grappled with the inter-generational nature of the human elements of maritime affairs. Ideas such as naval capital towns and inclusive deckplates are not forged into reality overnight. If we are serious about competing for and acquiring top talent, the maritime and national security communities must think not months or years but rather decades into the future.

Any analysis of military affairs is incomplete without acknowledging the crucial role of technology. The past, present, and future of conflict are all defined by the various tools and weapons used from era to era. However, no innovation exists in a vacuum. Military technology is impactful only in the context of how it is used by humans to prosecute a war or conflict. As the articles from this topic week demonstrate, studying and understanding the human elements as they relate to technology and education must continue to be a core task.

While each of these articles is a welcome contribution to the field of talent management, they should not be seen as definitive answers but as starting points for continuing discussion. In this vein, here is a look back at the contributions to CIMSEC’s Human Factors topic week and a key question the maritime community should continue discussing well into the future.

“Weaponize PME to Improve the Force,” by Bobby Holmes

“Educating Maritime Geostrategists for the Naval Services,” by Drake Long

We thank these authors for their excellent contributions on appreciating the human element in warfighting and maritime power.