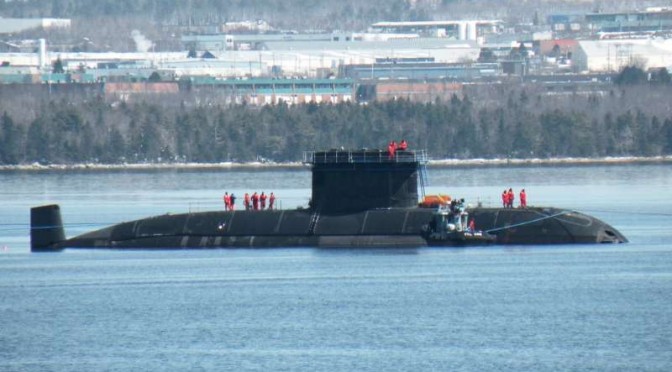 The following piece is cross-posted from our partners at the CDA Institute as part of an ongoing content sharing relationship. You can read the article in its original form here.

As HMCS Chicoutimi slipped silently into the depths of the Strait of Juan de Fuca, I reflected on what many friends and family remarked when I told them of my opportunity to spend a day underwater on her: “are you crazy?” Indeed, this particular submarine made their concern all the more poignant. Chicoutimi, after all, is arguably the most infamous submarine in the fleet given the fire on its maiden voyage to Canada, an incident that cost the life of Lt. (N) Chris Saunders, repairs costing millions of dollars, and a long delayed re-​entry into operational service. The fire established a story that we had bought lemons from a used car lot.

Since the fire, the navy has had to fight against this very well established narrative. Along with the usual references to the West Edmonton Mall, such derision extends even into the intellectual realm. Professor Michael Byers regularly publishes critiques of the program under snappy titles like That Sinking Feeling. If you Google “Canadian submarine” and “boondoggle,” you will get the picture very quickly.

I shared neither of the qualms of my family, nor the derision of the critics. The dedication and professionalism of those who work beneath the waves is remarkable. The cramped quarters would challenge most of us. Passageways are similar to airplane aisles, requiring passing people to turn sideways and get closely acquainted with their physical features. The “racks” in which one sleeps are roughly the size of a coffin, with just as much headspace. Three toilets are shared by 48 crew men and women (four women proudly serve aboard Chicoutimi), and the mess, a space measuring roughly ten by ten feet, is the only spot where one might escape the demands of the work environment. The biggest space aboard her is the operations room, smaller than most people’s living room, in which a team of 15 to 20 people work. The stink of diesel fuel embeds itself into hair and clothing. Finally, the secrecy of submarine movements means that no one may reveal when they will be leaving or returning to port, thus complicating any sort of social or family life.

The constraints of life are dominated by rigid safety protocols followed religiously. Failure results in death. Once the hatches were locked down, a rapid roll call raced through the vessel to ensure that no one had been left outside: early in the last decade, such a procedure was not standard in another navy, and two submariners, forgotten in the conning tower, paid for it with their lives. Once underwater, a constant drone of contacts, distances, and bearings, as well as depth soundings echoed within the operations room to ensure that Chicoutimi neither hit the bottom, nor vessels sailing above. When you can’t look out a window and see where you are, your reliance on technical systems becomes paramount.

Telling the real submarine story is inherently difficult. To begin with, Canadians have a certain “sea blinded-​ness” and the navy is an “unseen service”: most live far from the coasts and the demands of protecting them does not resonate. Submarines’ inherent stealthiness and secrecy compounds this further. Last, while the navy has good public relations programmes that enable ordinary Canadians to visit its ships and even sail aboard them for a lucky few, similar opportunities with submarines are rare. For my day aboard Chicoutimi, I lobbied the navy relentlessly for about a year, and then had to wait a further 18 months for an opening to occur.

Still, the basic problem affecting the navy’s submarine story is its plot. The navy likes to focus on technical details of the submarines.

Compared with surface vessels, submarines are relatively cost effective in conducting surveillance given the enormous ranges that their sensors are able to surveil together with the small size of their crews. Furthermore, this surveillance can be done very discreetly, allowing submarines to operate undetected in sensitive areas. Canadian submarines have performed very useful roles in the Caribbean Sea monitoring the transit of drug shipments, passing along such information to surface vessels and aircraft for their physical interdiction. Submarines also were able to monitor illegal fishing by American vessels in Canadian waters, surprising a few with a radio transmission noting their activities. It promotes the notion of the “balanced fleet”: waterspace control requires operating in all three dimensions – above, on, and below sea level.

Such arguments ring cold for ordinary Canadians given the lack of connection these success stories have for day to day life. The durability of the narrative of dysfunction is frustrating. Thus, no sub news is good news for the Royal Canadian Navy (RCN). That may satisfy admirals running the day to day operation of the fleet, but it is short sighted when it comes to justifying and replacing these vessels.

In order to drive out the narrative of dysfunction, the navy needs to address the emotive angle: when Canadians call our submarines lemons, they do so not because they know this to be a fact, but rather they feel it to be so. The metaphor of the used car is an easy one to understand and resonates strongly. But our submarines, used though they may be, are so much more than that. A trip on a submarine is like going into outer space. The safety culture of space engineering share much in common with submarines: the environment of outer space is every bit as unforgiving as the undersea environment.

Similarly, there is a “cool” factor that stems from such high technology that has never been exploited by the RCN (although has been by the US Navy – witness films such as The Hunt for Red October and Crimson Tide). If the RCN wishes to change the narrative of its submarines, it must begin to think along these lines. Only then may ordinary Canadians begin to see these vessels, critical to modern maritime security, as something less dysfunctional, and something more relatable to their day to day lives.

Dr. Paul T. Mitchell is a Professor of Defence Studies at the Canadian Forces College, where he is the Director of Academics and the RMC Associate Dean of Arts (CFC). He is well published on submarine affairs: his very first academic publication in 1991 examined the issue of Strategic ASW and War Termination. (Images courtesy of Paul Mitchell.)

One thought on “Navies, Narratives, and Canada’s Submarine Fleet”