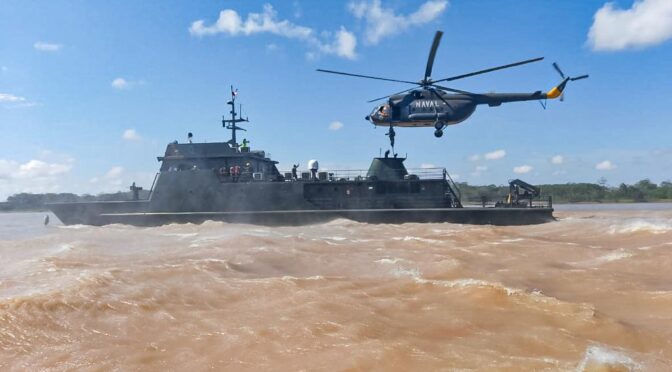 When thinking about navies, there is a natural tendency to focus on operations in the open sea and the role of carriers, frigates, and submarines. However, aside from protecting their territorial waters and exclusive economic zones, South American navies have another equally important theater of operation: inland water bodies like lakes and rivers.

The recently concluded riverine exercises ACRUX X and BRACOLPER and even last year’s UNITAS 2021 demonstrate the importance that regional navies place on inland bodies of water and riverine populations. Activities carried out by local navies, not to mention other armed services, including defense/security operations, combating crimes (illegal mining and smuggling are significant problems in the region), search and rescue, and humanitarian assistance/disaster relief operations. In South America, the armed forces help extend the reach of the state to areas where civilian agencies do not operate; navies utilize rivers as a system of complex highways via which they can move and operate just as efficiently as in the open sea.

South America is home to many rivers like the Amazon, Orinoco, Parana, and Uruguay, not to mention lakes like Lake Titicaca. In several areas where roads are non-existent, rivers are vital for the movement of people and goods. Landlocked nations Bolivia and Paraguay also have navies tasked with protecting their rivers and lakes.

Given the dense web of rivers and tributaries blanketing South America, it is unsurprising that these bodies of water are used to determine borders between countries. For example, the Putumayo River creates a natural border between Colombia and Peru; the Uruguay River separates Argentina and Uruguay; while Parana and Iguazu Rivers make the famous “Triple Border” that unites Argentina, Brazil, and Paraguay. Finally, Lake Titicaca is shared between Bolivia and Peru.

In an interview with the author, Rear-Admiral (ret.) Máximo Pérez-León-Barreto, from the Argentine Navy, and current Director of Strategic Affairs for Fundación Argentina Global, explained how the maritime highway created by the Paraguay, Parana, and Uruguay rivers are a “free area of travel” along the border between Argentina and its neighbors. “For Argentina, this area is a prime source of resources [including water], a source of electricity, and where a significant part of our population lives.” Similarly, Andrea Resende, an Associate Professor at the University Center of Belo Horizonte (UNIBH) and Ph.D. candidate at the Pontifical Catholic University of Minas Gerais (PUC MINAS), explained to CIMSEC that in Brazil, there is about 60,000 km of waterways with 12 different drainage basins.

Like gold, oil, or land, waterways were previously a reason to go to war. In the case of Brazil, “the waterways were so important that the Imperial Brazilian Navy sent gunboats by the Paraná River to fight in the Paraguayan War (1864 – 1870), which resulted in the Riachuelo Battle (1865),” Resende explained. Anecdotally, the battle lends its name to Brazil’s first domestically manufactured submarine, the Riachuelo (S-40). While the Brazilian Navy is much more focused on its blue water capabilities these days, under its “Blue Amazon” initiative, rivers and lakes should not be overlooked by strategic planners. Resende noted that “with the publication of the White Book of Defense (2012) and the Navy’s Strategic Plan for 2040 (PEM 2040), released in 2020, the waterways have regained relevance in the strategic thought.”

Operations across Rivers and Lakes

Listing all recent operations that South American navies have performed would be problematic due to space considerations. In recent months, several activities demonstrate the plethora of activities navies carry out across these inland bodies of water. For example, the Peruvian Navy, alongside the Army, Air Force, and Police, are combating illegal mining in the Madre de Dios region.

Similarly, Resende explains that “all kinds of illegal trafficking are present in the Brazilian Rivers,” including the trafficking of drugs, animals, people, illegal fishing, illegal logging, and illegal mining (gold, ore, and other minerals). In recent months there have been reports of illegal logging in the North of the country. “This is not a surprise since official reports from the Amazon Institute of People and the Environment (IMAZON), which coordinates programs to surveil the Amazon rain forest, claims that the illegal logging in the region is the highest in 15 years,” the Brazilian academic explained.

Navies are also involved in humanitarian assistance/disaster relief operations. The Brazilian and Peruvian navies regularly deploy hospital ships across their rivers (and Lake Titicaca, in the case of Peru) to reach isolated coastal communities and provide medical services. The Bolivian Navy also has a hospital ship utilized for similar purposes.

Resende also added the vital work the Brazilian Navy has carried out during the COVID-19 pandemic. “They continuously delivered food, health care, and educational support for [riverine] communities. When the city of Manaus, capital of the Amazonia state, suffered an oxygen crisis in the middle of the pandemic… the Navy quickly established a mission to bring oxygen cylinders to the city with the help of the Air Force.” The service also took the lead in delivering vaccines when they became available across the country. A similar situation has occurred in Argentina; as Rear Admiral Pérez-León-Barreto explained, the Argentine Navy assists “communities that have limited connectivity [to the rest of the country] due to the geography, via sanitation campaigns” in coordination with other agencies.

Rivers can be used to transport equipment for social activities too. For example, the Colombian Navy’s riverine gunboat ARC Leticia recently concluded a trip through the Amazon River; the goal was to set up a portable projector to show a movie to the children of Puerto Narino municipality. This social initiative is called “Cine 90.”

Brazil, Colombia, and Peru border each other, with the Amazon River crossing them all. Their navies carry out BRACOLPER, one of the oldest joint multinational exercises in the region, dating back to 1974.

This exercise is a critical confidence-building mechanism by which vessels from the three countries travel the Amazon, crossing international borders, providing medical assistance to local inhabitants, and carrying out joint maneuvers and security operations. BRACOLPER 2022 lasted 35 days, according to Brazilian Vice Admiral Thadeu Marcos Orosco Coelho Lobo, commander of the Navy’s 9th Naval District. He explained “annually we cover around five thousand kilometers, across the Maranõn, Negro, and Solimões Rivers [and we perform] tactical naval exercises for riverine operations, with a focus on command, control, and communications.”

The 2022 maneuvers were divided into three phases: phases I and II along the Maranõn River in Peru between Leticia (Colombia) and Iquitos (Peru), while phase III occurred in Amazonas (Brazil) along the Negro and Solimões Rivers. Around 400 military personnel from the three countries participated, including Brazil’s riverine patrol ships Raposo Tavares, Rondonia, and the hospital ship Oswaldo Cruz. Peru deployed the riverine vessel BAP Clavero (CF-15).

The other major riverine exercise in South America is ACRUX. Its latest iteration took place along the Uruguay River, which separates Argentina and Uruguay, with Montevideo hosting the exercises, which lasted from 16-24 August 2022. Around 500 military personnel and naval and aerial platforms participated from Argentina, Brazil, and Uruguay, while Bolivia and Paraguay sent observers.

The exercises took place in Fray Bentos, Uruguay. They included marine traffic control, in which the naval command from the three nations, plus assets in the water, worked together during simulated emergency alerts, issuing meteorological bulletins, and classifying vessels that passed through the River, among other activities.

Rear Adm Pérez-León-Barreto stressed the importance of riverine exercises like ACRUX, “they allow [navies] to maintain a high degree of coordination to understand risks, prevent them and mitigate the effects” of potential disasters or other incidents. Resende had a similar opinion about the importance of BRACOLPER and ACRUX, adding, “those exercises are an essential part not only of the Brazilian Navy but expresses the sentiment of the whole continent: cooperation is always the key.”

The United States military understands the importance of riverine operations for its South American partners. Case in point, in 2021, the famous multinational exercise UNITAS included an Amazon phase for the first time. UNITAS LXII-Amazon included naval personnel from Colombia, Ecuador, Uruguay, the United States, and Peru, which hosted the exercises. The Amazon phase took place in the Peruvian Amazon, close to Iquitos. It included fast rope insertion from helicopters, riverine patrols, river-crossing in improvised craft, and insertion and extraction on riverine combat craft, among other maneuvers.

Lakes and rivers across South America require the same protection that navies provide to the open ocean, as riverine crimes are vast. The recent exercises BRACOLPER, ACRUX, and UNITAS-Amazon 2021 highlight how South America’s militaries, particularly the navies, train to patrol and defend inland water bodies.

Wilder Alejandro Sánchez is an analyst who focuses on international security and geopolitics. He is the President of the new consulting firm Second Floor Strategies. Follow him on Twitter: @W_Alex_Sanchez