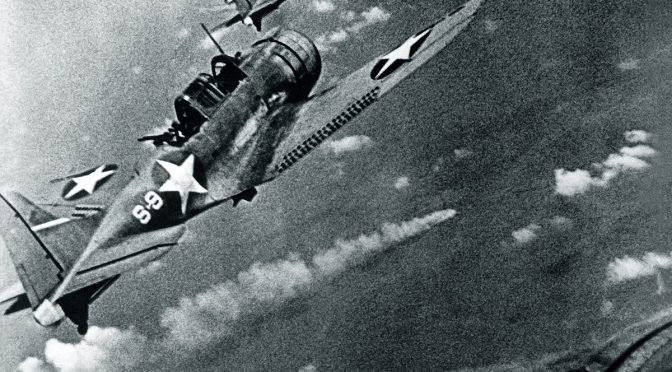 Seventy five years ago, Ensign “Dagwood” Propst sat in the pilot seat of his large PBY search plane waiting to takeoff from Midway. He and his crew were about to embark on a night mission they had never conducted, to employ a weapon they had never used, against an enemy they had never met.

On June 3, 1942 the four Japanese carrier groups had not yet been located and the famous engagements to occur the following day were still in the future for both American and Japanese forces. But reconnaissance aircraft stationed at Midway had located Admiral Tanaka’s transport forces approaching from the east and the island’s defenders were keen on attacking where they could.

Ensign Propst’s Catalina was number three in a flight of four radar-equipped PBYs taking off from Midway to conduct a night torpedo attack against the Japanese transport group – unsuccessfully attacked earlier that day by Midway’s B-17s. The idea to strap torpedoes to the wings of these large slow search aircraft and conduct a night attack had been thought up that afternoon, and the least tired crews of the VP-44 air reconnaissance squadron had been selected to fly them. They had been briefed, discussed tactics, and were ready to take the action to an enemy that had attacked Pearl Harbor only six months earlier.

Lead by Lieutenant Red Richards, the flight of these large, slow PBYs-turned torpedo attack planes were airborne at 2115 and winging toward their target. After navigating through bad weather one PBY lost contact with the others and after an unsuccessful search for the enemy returned to Midway. As told by Gordan Prange in his book Miracle at Midway, the three remaining PBYs broke into clear weather just as they neared Tanaka’s ships. Although not coordinated, all three made attack runs. Ensign Propst targeted the largest silhouette, swung in a wide spiral to mask his approach by flying into the moon’s path, lowered his aircraft to 50 feet altitude, and dropped his weapon. His attack resulted in the first and only American air dropped torpedo hit in the entire Battle of Midway. Ensign Propst’s hit on the oiler Akebone Maru killed or wounded 23 men and was the first blood drawn in the entire battle.

Was this night attack a foolhardy and reckless plan blessed by luck, or a high-risk venture informed by a sound plan, good knowledge of aircraft and weapon capabilities, and a motivated air crew?

In his “Lessons from the Battle of Midway,” Victor Davis Hanson observes  “…American commanders were far more open to improvising and risk-taking than their Japanese counterparts.” But more than just the commanders, the mid-grade and junior officers combined technical competency, innovative thought, and bold initiative to do such things as strap a torpedo on the wings of a PBY, develop the “Thach weave” to overcome fighter short comings, and gleam information from  Japanese communications.

The Thach weave was a two-aircraft tactic to counter the Zero’s superior maneuvering capabilities. Conceived months early by John Thach using match sticks as a simulation and then tested in mock combat with Ensign Edward Butch O’Hare, the namesake of O’Hare Airport, the Thach weave was first employed by John Thach himself while in combat on 4 June. Used again in Guadalcanal, it became a standard U.S. fighter tactic.

And, as every intelligence officer knows, Commander Joseph Rochefort, Chief of the Combat Intelligence Office on Hawaii, lead innovative efforts to derive Japanese Midway attack intentions that led to Nimitz positioning Task Force 16 and Task Force 17 northeast of Midway. What is not universally appreciated is that his assessments were frequently challenged by his intelligence chain of command, particularly in Washington D.C.

In each of these examples, relatively junior officers were put in unfamiliar crisis situations which demanded action on their part. Using their technical knowledge, innovative approaches, and courage they found sound, bold courses of action. This is the tie to the Naval Postgraduate School today. As an institution we keep that spirit alive by providing technical know-how, in context of operational and tactical situations, and challenge our students to produce innovative solutions to real world problems. From exploring concepts of swarming unmanned aerial vehicles to smart warheads on torpedoes, we advance graduate and professional education synergistically. That is our niche, that is our uniqueness, and that is our contribution to the nation’s future security.

The importance of continuing to educate officers in preparation for a future conflict was not lost on Chester Nimitz, even before World War II started. As told in one of our Dudley Knox Special Collection papers authored by John Sanders, Admiral Nimitz wrote a letter in 1965 stating “When I became Chief of Bureau of Navigation in June 1939—my first act was to send for the BuNav War Plans. To my horror—I learned that on “D” day—it was planned to close down the Naval War College and the Naval Postgraduate School in order to provide officers for an expanding Fleet—as was done on ‘D’ day for World War I…..I immediately cancelled those plans and prepared for expanded classes at both the War College and Postgraduate School.” In fact, after 1941 the postgraduate school’s student population increased threefold. By war’s end, Chief of Naval Operations Ernest King was already ordering surveys for a west coast NPS site to accommodate the school’s future growth. And, in 1951 the school moved to its new location in the Hotel Del Monte in Monterey which had served well as an aviation training location during the war.

In addition to Nimitz and King, Admiral Arleigh Burke recognized the importance and uniqueness of the Naval Postgraduate School when, in a NPS commencement address, he said recognized the foresight  of NPS founders by saying “They recognized that ships and naval weapons were becoming more complex, that their proper employment at sea would require officers who were familiar not only with the age old profession of the sea, but who could understand and could use effectively the complex weapons of the years to come.”

And today, are we meeting the expectations of Nimitz, King, and Burke? In their time the stuff of lasers, robotics, and 3-D printers was science fiction. Today, our graduates who studied how to apply these technologies at NPS are in the fleet. Graduates like CDR Chad Kaiser, when as a student and Lieutenant, modeled and simulated the real threat of an unmanned aerial swarming attack against our destroyers, coming up with  the best way to use our combat systems to defend against it. His work was sent to the fleet as a tactical bulletin. Or now Lieutenant Commander Jeffrey Kee, who, using insight in potential adversaries locating and targeting methods, suggested ways for our ships to maneuver to increase the enemy’s uncertainty in targeting–or recently retired, Admiral McRaven, whose NPS thesis became doctrine for counterinsurgency operations. There are many examples, such as work in bi-static acoustic operations, adaptive optics, distributed and integrated logistics, cyber operations, attacker-defender optimization, unmanned systems, force design, and energy research.

To summarize with a quote from William Lind in the Maneuver Warfare Handbook :

“The process that is tactics includes the art of selecting from among your techniques those which create that unique approach for the enemy, time, and place.  Education is the basis for doing that – education not in what to do, but in how to think.”

At NPS we teach officers how to think about employing technology in situations they have not thought about before. We rarely know the answers, as it is a journey of discovery for both officers and faculty. But I do know this, our graduates are prepared to face unanticipated conflict situations, and then apply their technical and tactical talents to generate and apply innovative ways to meet our country’s future challenges.  That is what makes the Naval Postgraduate School a most unique educational institution in our country.

Featured Image: U.S. Douglas SBD-3 Dauntless dive bombers of VS-8 from USS Hornet about to attack the burning Japanese cruiser Mikuma for the third time on 6 June 1942 (Wikimedia)

2 thoughts on “From Midway to Monterey: Leveraging Initiative and Technology”