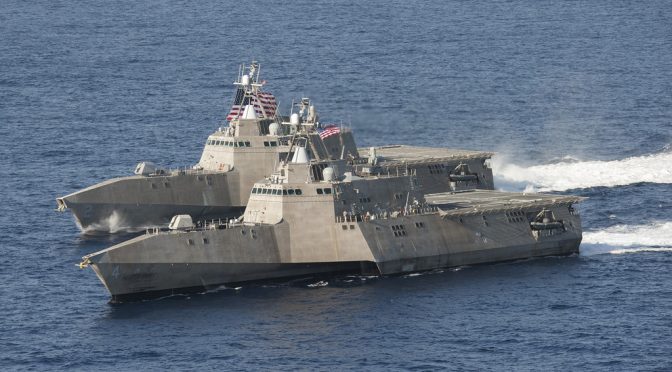 Welcome to part two of the May 2016 members’ roundup. Over the past two weeks CIMSEC members have examined several international maritime security issues, including the future role of the Littoral Combat Ship in the U.S. Navy, the continued development of the U.S. military’s Long Range Anti-Ship Missile, the possibility of reducing tensions in the Western Pacific with an international Standing Naval Group, and the development of an undersea second strike capability for India’s nuclear forces. Read Part One here.

Beginning the roundup with a discussion on the Littoral Combat Ship (LCS), Jerry Hendrix for Defense One argues that the U.S. Navy must adapt a procurement strategy that will emphasize a larger fleet and focus on providing the capacity to maintain a sustainable forward presence in multiple contentious maritime environments. Considering current budgetary constraints and the high costs associated with advanced capability ships, such as a $15 billion dollar aircraft carrier or a $2 billion dollar destroyer, acquiring enhanced LCS’s can provide the Navy with a relatively low-cost yet capable platform suitable for growing the size of the fleet. Mr. Hendrix suggests that to achieve an appropriate fleet size of 350 ships (currently 272) and to continue to promote global maritime stability the LCS should be recognized as a priority for the Navy to deploy in significant numbers.

Dave Majumdar, at The National Interest, provides an overview of the Ohio-class Replacement Program (ORP). Mr. Majumdar notes that Electric Boat will be responsible for about 80 percent of the submarines design and production while Huntington Ingalls Newport News will take on the other 20 percent of design and production work. To reduce costs and inefficiencies affiliated with previous ballistic missile submarine construction, the ships’ designers have applied several technologies and systems used in the Virginia-class ­submarines for the ORP. Mr. Majumdar explains that these cost reductions, in addition to the common missile compartment (CMC), will allow for the ORP to be constructed with minimal delays, which should also limit typical cost overruns associated with nuclear submarine production.

Sam LaGrone, at U.S. Naval Institute News, highlights the continued development of Lockheed Martin’s Long Range Anti-Ship Missile (LRASM) and the current $321 million dollar contract from Naval Air Systems Command (NAVAIR) Lockheed is operating under to complete the missile’s critical design review (CDR). After completion of the CDR, testing for use of the air-launch variant of the missile by the Boeing B-1B Lancer supersonic bomber and Boeing’s F/A-18E/F Super Hornet fighter will begin. Mr. LaGrone explains that the LRASM program is part of the Pentagon’s process of substantially improving the military’s decades-old gap in anti-surface weapons.

Entering the Asia-Pacific, Lauren Dickey and Natalie Sambhi at Foreign Entanglements discuss cross-strait developments in the context of Taiwan’s new President while also unpacking China’s security policy beyond the South China Sea. The discussion highlighted the attributes of the current Taiwanese President Tsai Ing-wen and how her recent public rejection and criticism of mainland China’s one-child policy reflects the pragmatic and pro-independence perspective that she will likely articulate throughout her time in office. Ms. Dickey and Ms. Sambhi also raised the possibility of increased counterterrorism operations in China to meet heightened domestic security concerns in addition to examining China’s role in driving U.S.-Australian relations.

Steven Wills and his colleague Ronald Harris, at U.S. Naval Institute News, discuss the need for an international solution focused on reducing tensions in the Western Pacific. Mr. Wills and Mr. Harris suggest that establishing a Standing Indo-Pacific Maritime Group (SIPMG) for the purposes of humanitarian assistance/disaster relief (HADR), counter-piracy patrols, and general assistance to mariners in distress in international waters can provide a medium through which countries with competing territorial claims in the region can still cooperate and maintain channels of communication. The article explains that the SIPMG would primarily consist of limited capability ships focused on low-threat security operations while the Group’s command structure could be based off of the proven national rotation system used by the Standing North Atlantic Treaty Organization’s (NATO) Maritime Groups.

To conclude the roundup, Harry Kazianis for The Asia Times examines the DF-21D ASBM threat and whether the publicity surrounding the missile in defense circles is warranted. The article references the US-China Economic Security Review Commission Report to highlight the unproven capabilities of the missile, particularly in successfully hitting a moving ship from hundreds or thousands of miles away while the ship is implementing a wide-range of defense and countermeasures against the missile and its targeting systems. The article provides an interesting comparison between the Soviet Union’s development of a submarine-launched ASBM in the 1970’s and China’s current attempt to develop the same long-range ASBM capability. Mr. Kazianis notes that the Soviet Union cancelled the development of the missile due to terminal targeting difficulties, which is an end result that may soon reflect China’s ASBM program. Mr. Kazianis suggests that all contingencies should be prepared for considering Beijing’s access to an advanced satellite and ballistic missile technology base that the USSR lacked over 40 years ago.

CIMSEC Members were active elsewhere in May: