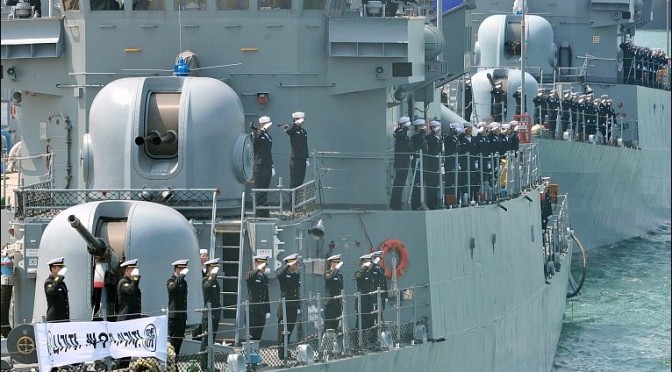 Welcome to part one of the March 2016 members’ roundup. Over the past month CIMSEC members have examined several international maritime security issues, including an increase in Russian naval activities and deployments, recent U.S. naval exercises demonstrating the Fleets’ application of the distributed lethality concept, laser technologies and the U.S. defense acquisition program and as usual, the increasingly tense security environment in the Asia-Pacific.

Paul Pryce begins the roundup in the Asia-Pacific with a discussion, on what he refers to as, the new era in Singaporean defense procurement. In his article at Offiziere, Mr. Pryce highlights that previous procurement strategies for the country’s Navy have focused on acquiring mainly European designed vessels, either built specifically for Singapore or purchased following a short period of service in the initial European country. However, the planned construction of eight indigenous Independence-class littoral mission vessels beginning in 2016 and the expected procurement of a domestically built light aircraft carrier through 2021 suggests that the Singapore’s shipbuilding capacity and overall maritime force projection capabilities are becoming increasingly strengthened – a significant implication for Singapore’s role in South East Asian security dynamics.

Alex Calvo, for Asian Military Review, discusses the challenge Taiwan faces in securing a replacement for its four aged hunter-killer submarines (SSKs), two of which are vintage Tench-class World War II boats while the other two were commissioned in the Netherlands in 1987 and 1988. Mr. Calvo explains how Europe has become reluctant to support Taiwanese military procurement needs for fear of angering China while the United States no longer produces SSKs. He suggests that Taiwan may look to Japan as an alternative source for its SSK replacement largely due to recent efforts by the Japanese shipbuilding industry to win the contract for the Royal Australian Navy’s SSK procurement requirements while also noting a lack of other feasible alternatives.

Kyle Mizokami, for Popular Mechanics, discusses China’s plans to establish aircraft carrier battle groups tasked with defense of the country’s territorial sovereignty, maritime rights and overseas interests both regionally and perhaps globally. Mr. Mizokami highlights the nature of China’s first operational aircraft carrier, the Liaoning, as he explains its training role and limited capacity to carry large numbers of combat capable aircraft. However, he also notes that China has confirmed the construction of the Dalian carrier, which will have more hangar space for support and combat aircraft – but will still only displace about 50 000 tons, or half that of a modern U.S. carrier.

Leaving the Asia-Pacific, Dave Majumdar outlines the implications of Russia’s planned massive live-fire nuclear exercise being conducted by two Project 955 Borei-class ballistic missile submarines deployed with the Northern Fleet. In his article at The National Interest, Mr. Majumdar explains how one of the missile boats will sequentially launch all sixteen of its RSM-56 Bulava missiles at a depth of 164ft while highlighting that such an exercise, whether a U.S. or Russian ballistic missile boat, would only launch their entire payload in conflict as part of full-scale retaliatory or offensive nuclear strike. In a second article at The National Interest, Mr. Majumdar discusses the spotting of a Russian Project 667 BDRM Delfin-class ballistic missile submarine near French territorial waters – the boat carries sixteen missiles capable of carrying four nuclear warheads each with a range of 7500 miles.

Bryan McGrath, for the War on the Rocks, provides the ‘First Principles’ that will help guide the difficult task of structuring the U.S. Navy’s future fleet. Mr. McGrath emphasizes that the Navy must be sized and shaped into a fleet that allows for both combat-credible and presence forces to be positioned globally in a manner that secures national interests while effectively deterring major power conflict. He also mentions the implementation of the distributed lethality concept, where individual platform lethality is increased even as the force becomes geographically dispersed. On this point, Mr. McGrath argues that an individual combat capacity increase should not compel policy makers to reduce the size of the fleet, as one does not necessarily balance the others strategic importance. On the same topic at The National Interest, Dave Majumdar describes a recent test of the SM-6 missile where it was revealed that the system now retains effective anti-surface capability, a major step for distributed lethality implementation across the fleet.

Members at CIMSEC were also active elsewhere during the first part of March:

CIMSEC has also recently (February) published a compendium discussing a range of strategies, challenges and policy options concerning Distributed Lethality. You can find a download link for all of the articles here.

One thought on “Members’ Roundup: March 2016 Part One”