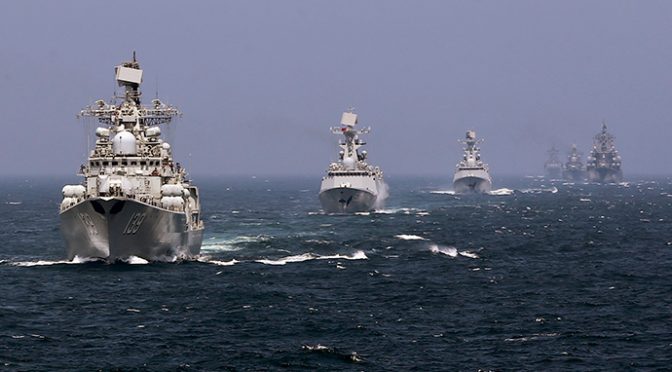 Kyle Mizokami, for Popular Mechanics, reviews the U.S. Navy’s failed Harpoon anti-ship missile test during a sinking drill at the RIMPAC 2016 multinational naval exercises. During the sinking operation, the littoral combat ship USS Coronado launched a Harpoon 1C missile at the retired frigate USS Crommelin, which was 20 miles away. He explains that that the Navy is investigating why the missile was lost from radar contact and never impacted the target ship. The missile exercise reflects the Navy’s continued testing of various missile systems in an attempt to update and improve the fleets’ surface-to-surface warfare capability. He notes that the Navy will likely adopt the Long Range Anti-Ship Missile (LRASM), Norwegian Naval Strike Missile or the Harpoon Block II+ as the next-generation surface-to-surface combat missile for the fleet’s surface ships.

Harry Kazianis, at The National Interest, discusses China’s imminent response to the South China Sea arbitration ruling in relation to the upcoming G-20 Summit Beijing is set to host on September 4-5 in the city of Hangzhou. He suggests that leading up to the summit Beijing will limit contentious actions in the South China Sea as to not risk any drama at the gathering of world leaders or risk positioning themselves where losing face during the summit’s proceedings is a possibility. He adds that China may be timing their next major South China Sea move for the post-summit months when the soon-to-leave Obama administration will be uninterested in jumping into an Asia-Pacific crisis in addition to the U.S. public being preoccupied with developments in the American election cycle. He notes that if China were to declare a South China Sea Air Defense Identification Zone (ADIZ) or start reclamation work at Scarborough Shoal, the U.S. will be unlikely to have the political unity or willpower to respond effectively to Beijing’s actions.

Paul Pryce, for the NATO Association of Canada, provides an analysis on the three aircraft the Canadian government is considering for procurement as the country’s new Fixed-Wing Search and Rescue (FWSAR) aircraft – the C295W from Airbus Defence, the C-27J Spartan from Alenia, and the KC-390 from Embraer. The search for a new SAR aircraft to replace the country’s aging CC-115 Buffalo fleet has been ongoing since a Request for Proposal (RFP) was released by Public Services and Procurement Canada in 2002. He explains that each of the aircraft being considered are similar enough in size and design to the CC-115 Buffalo that it would not be difficult for Royal Canadian aircrews to adapt to operating them and that each plane has significantly greater range and payload capacity than the Buffalos. He adds that these capability improvements will be especially beneficial for search-and-rescue operations in the remote northern regions of Canada.

Robert Farley, for The Diplomat, examines India’s pending decision of whether to accept or not to accept Russia’s offer to construct a multirole nuclear aircraft carrier for the country’s Navy. He explains that very few countries have the capacity to build a modern, nuclear aircraft carrier, and that there are few countries willing to export such technology. He also adds that Russia has played a major role in India’s naval aviation program having modernized the INS Vikramaditya, and having supplied the Indian Navy with carrier aircraft. Russian shipbuilders and military planners are likely familiar with Indian Navy carrier needs and specifications. From the opposite perspective, he argues that Russia’s lack of recent nuclear propelled surface vessel construction should deter India from awarding Russia the contract. He adds that if India were to rely on an export option for its next carrier (INS Vishal), it risks losing the shipbuilding expertise and capacity that it has begun to develop with the construction of the carrier INS Vikrant – a capacity that is critical for India’s long-term maritime interests.

Members at CIMSEC were active elsewhere during the second part of July:

At CIMSEC we encourage members to continue writing either here on CIMSEC or through other means. You can assist us by emailing your works to dmp@cimsec.org.