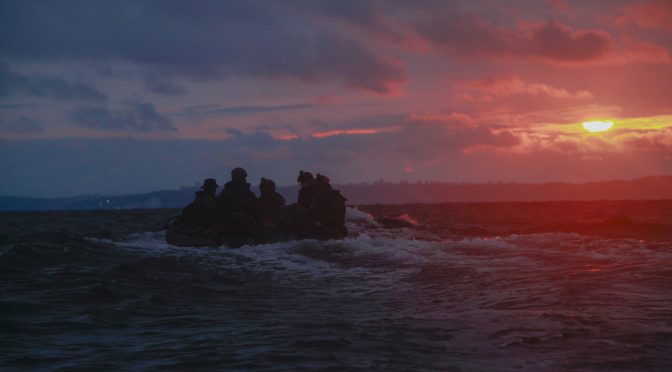 “Free and open access to the South and East China Seas is critical to both regional security and international commerce…Through its illegitimate efforts to build and militarize islands in the region, the Chinese Communist Party has aggressively attempted to control these critical waterways and undermined international law. This legislation makes clear that any individual or entity supporting these illegal actions will be held accountable.”1

There can be no doubt that the United States lacks an actionable maritime strategy with respect to the South China Sea, nor does the maritime force exist to effectively counter Chinese expansion in this economically and politically critical space. The bipartisan National Defense Strategy Commission made this clear in its recent report to Congress. While the Navy and Marine Corps have nascent  operating concepts in Littoral Operations in a Maritime Environment (LOCE) and Expeditionary Advanced Base Operations (EABO),  the United States—given the current fiscal environment—is years away from developing a naval force in size and sophistication to directly contest Chinese militarization of the South China Sea through the implementation of said concepts. Moreover, as Rep. Mike Gallagher of the House Armed Services Committee recently explained, “The Marine Corps’ emerging Expeditionary Advanced Base Operations concept is a good start, but it needs to go further and focus on how to put capabilities in place persistently rather than moving them in place after a crisis begins.”2 In short, the maritime services have much work to do in refining and translating current operating concepts into a “just in time” stop-gap answer to an increasingly volatile security situation. They must do so in an innovative manner that inspires joint and combined action.

A potential military solution to the ongoing and growing problem in the South China Sea lies in the middle ground between directly contesting and accommodating China’s illegal actions. This solution would be part of the “collective pressure” strategy recently recommended by Hal Brands and Zack Cooper. The United States, bringing all elements of national power to bear, would persistently reinforce diplomatic and economic relationships with regional partners (i.e. Philippines, Vietnam, Malaysia, Indonesia, etc.) while focusing theater security cooperation in the region in order to demonstrate its commitment to offsetting malign Chinese influence in the region. Central to this will be a tactical solution that provides a credible deterrent, and is capable of sea denial in the vicinity of key maritime terrain while functioning as a covering force for the deployment of a larger Combined Joint Task Force (JTF).

In the last six months, the United States Marine Corps’ Training and Education Command Warfighting Club (TWC) has considered this challenge in the context of LOCE/EABO and published its preliminary findings in the July 2019 Marine Corps Gazette. Using commercial, off-the-shelf simulations software, TWC was able to confirm the ineffectiveness of current U.S. Navy and Marine Corps doctrine and tables of organization against a People’s Liberation Army Navy (PLAN)-led limited objective attack in the South China Sea.

TWC also ran several sea denial simulations with a specifically designed “Inside Force,” building a Multi-Domain Marine Air Ground Task Force (MD-MAGTF) around a reinforced Marine Infantry Battalion forward deployed on key maritime terrain (the Philippine island of Palawan). The simulated MD-MAGTF was supported by land-based anti-ship missiles, armed (kinetic/electronic warfare) unmanned aerial systems (UAS), and unmanned surface vehicles (USV), as well as forward elements of the Pacific Fleet operating over the horizon in the Leyte Gulf. In each simulation, the MD-MAGTF was able to force Chinese naval and aviation forces to culminate both tactically and logistically with limited friendly losses. Through the employment of swarming tactics, the MD-MAGTF (supported by a larger JTF) overcame threat surface/aviation units, exposing their inability to effectively counter a coordinated UAS and anti-ship missile threat. In certain iterations of the simulation, the MD-MAGTF was able to commence limited strikes on militarized islands in anticipation of the entry of a follow-on combined maritime force.

Implementation of this inside covering force requires several critical actions and enablers:

Remissioning: As a part of the METL review process, Marine Corps planners must take a hard look at the Navy’s Composite Warfare doctrine and how Sea Denial is not addressed as a MET, with supporting Training and Readiness (T&R) tasks across the MAGTF.

Restructuring: The Marine Corps lacks critical capabilities to execute sea denial. In a fiscally constrained environment, these shortfalls can only be addressed through restructuring and a revision of tables of equipment. The focus should be on air defense, UAS, and artillery battalions.

Training and Exercises: At present, SLTEs are focused on land-based, offensive operations. Exercise design must also look at maritime operations in the littorals in partnership with the Navy and Coast Guard. This necessitates a dedicated plan of action for updating range and landing beaches on San Clemente Island, as well as this training area’s incorporation into SLTE design, whether through live or constructive means.

2. Focused INDO-PACOM partnership with the Philippine Armed Forces, specifically Task Forces 41 and 42, the 4th Naval District, and the 10th Marine Brigade Landing Team. The MD-MAGTF cannot effectively train nor operate without partner nation political and military support. With that in mind, INDO-PACOM must move beyond scripted amphibious bilateral exercises centered on Luzon. INDO-PACOM and III MEF planners must work with the Philippine Armed Forces in order to redirect efforts toward bilateral, free-play exercises in Palawan and the Philippines’ western littorals.

3. Over-the-horizon aviation and logistical support for the MD-MAGTF should be provided by an Expeditionary Strike Group (Task Force 76/31st Marine Expeditionary Unit) operating in the Leyte Gulf. This can easily be incorporated into INDO-PACOM’s current list of joint and combined exercises.

4. On call logistical support from an Expeditionary Transfer Dock vessel capable of over the horizon aerial/surface resupply via UAS/USV. The Navy and Marine Corps have conducted extensive experiments using this class of support ships as an adjunct to the ARG. Further experimentation is required to determine how non-L class ships can be added to or replace those capabilities typically found in a standard ESG. These experiments should focus on what personnel and support equipment capabilities are required to support launch and recovery of ordinance and logistics payloads on UAS/USV in support of a MD-MAGTF.

While the task of sea denial is not explicitly addressed as a current United States Marine Corps MET, this concept is not new and would nest well with the Naval Composite Warfare doctrine. It is a dusting off of the Marine Defense Battalion concept of the inter-war years. Despite less than optimal pre-war logistical support, the effectiveness and sacrifice of the 1st Marine Defense Battalion on Wake Island (in gaining time for U.S. offensive operations in the Pacific) and the TWC study of the problem set serve as a framework for the proposed solution. Based off the initial results of TWC simulations, a modern ground-based, multi-domain capable, inside covering force can act as an integral component of a larger JTF and may serve as an effective maritime counter to Chinese aggression in the South China Sea.

LtCol Draa is a career infantry officer with 19 years of active duty service in the United States Marine Corps. He is currently stationed at Quantico Marine Corps Base with Training and Education Command (TECOM). He is a charter member of the TECOM Warfighting Club, the Commanding General’s working group that explores and evaluates future warfare concepts, applications in maneuver warfare and mission command in improving professional military education. These are presented in a personal capacity and do not necessarily reflect the views of the U.S. government.