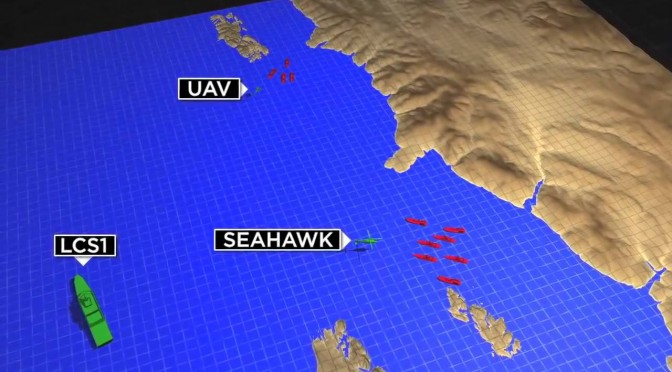 There has been a lot of discussion lately about the survivability of the LCS and smaller combatants in general. A recent US Naval Institute News opinion piece contends,

“Small warships are historically unsurvivable in combat. They have a shorter floodable length, reduced reserve buoyancy and are more likely to be affected by fire and smoke damage than larger combatants. In both World Wars, losses in ships below 3000 tons in displacement far exceeded those of larger vessels.

“In World War II, for example, the U.S. lost a total of 71 destroyers and 11 destroyer escorts — all under 3400 tons displacement and less than 400 feet in length.

“By comparison, only 23 larger ships were lost. Part of that figure is undoubtedly due to their operational employment, but in simple terms of engineering and physics, larger ships are inherently more survivable than their smaller counterparts.”

In the Coast Guard we once had a saying, “In our obscurity is our security.” I think that should be kept in mind when we consider the survivability of small surface combatants. No, they cannot take as much damage as major surface combatants, but the enemy gets a vote, and he will be less “excited” by the presence of smaller vessels, while he will normally choose to put more effort into destroying larger, more threatening ships. As in land warfare, tanks are more survivable than infantrymen, but they don’t necessarily last longer.

To look at how this factor might influence survivability, I looked at how many of the ships that were in commission at the beginning of World War II were sunk as a result of enemy action. My source is the Summary of War Damage to U.S. Battleships, Carriers, Cruisers, Destroyers, and Destroyer Escorts which is accessible here. The figures there do not correspond to those quoted above, rather they report 58 destroyers and 9 destroyer escorts sunk, along with 26 larger surface combatants, all listed by name. (The USNI post may have included constructive losses that were not actually sunk or losses to other than enemy action, and does not include the three battleships salvaged although they were out of action most of the war.)

If we look only at the US fleet at the beginning of the war, it included 233 major surface combatants of which 46 or 19.7% were sunk by enemy action during the course of the war. If we break it down by class it looks like this:

(There were no Destroyer Escorts in commission at the beginning of the war.)

Additionally three destroyers were lost to weather in a hurricane. They were not ballasted properly, because of the exigencies of impending combat operations.

Clearly, at least looking at the World War II experience, the US Navy did not lose a higher percentage of smaller ships. If anything it appears the opposite is true. A smaller percentage of smaller ships were lost (17% vs 27.4%). More small ships were lost simply because there were many more of them. Undoubtedly some of the DDs and DEs that were sunk, would have survived the damage they received, if they had been bigger, but presumably there would also have been fewer of them. If the decision criteria were an equal chance of being sunk, then probably taking greater risk with smaller ships is both reasonable and unavoidable.

Photo: USS Newcomb DD 586 was hit by as many as five kamikaze on 6 April 1945 as she was screening for the cruiser USS St. Louis off Okinawa. She survived but was not repaired.

I will add a bit of anecdotal evidence. As part of Operation Overlord, the Normandy Invasion, 60 US Coast Guard 83 foot patrol boats were assigned to rescue those unlucky enough to find themselves in the water or sinking. 30 went to the American beachheads and 30 went to the British and Canadian beachheads. Being wooden hulled and gasoline powered, they certainly would not have been considered “survivable.”

Apparently they were in the thick of it, because they rescued 1438 men from the water and sinking craft. In spite of all the fire from shore, not a single boat was sunk and not a single crewmen was killed. Apparently the German gunners were too busy with the landing craft hitting the beach and the warships that were shelling them. They simply were not a priority target.

This article can be found in its original form at Chuck Hill’s CG Blog.

2 thoughts on “The LCS Survivability Debate”