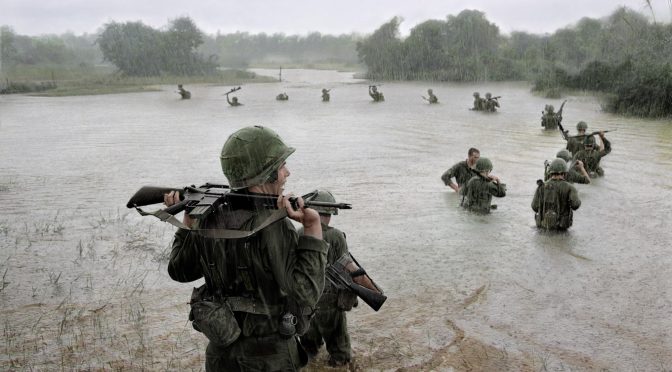 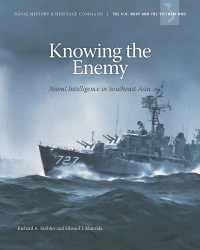 Demonstrating the continuity of all-source intelligence analysis between then and now, the all-source techniques Vietnam-era analysts used to track illicit civilian shipping had originally been perfected during the Second World War. During Operation Market Time, the U.S. Navy’s interdiction campaign in the South China Sea against trawlers smuggling weapons from North Vietnam into South Vietnam, naval intelligence used what Mobley and Marolda describe as a “sophisticated analytical and interpretive process” and techniques like “pattern analysis,” to achieve “a comprehensive understanding of what routes the infiltrating ships would take and what sites on the coast of South Vietnam they would attempt to reach.”

During Vietnam the Navy experimented both with methods where imagery collected during airborne reconnaissance missions was exploited onboard the carrier in the IOIC, as well as what is now called “reachback,” with analysts at the Fleet Intelligence Center Pacific Facility (FICPAC) in Hawaii exploiting imagery during Operation Rolling Thunder early in the war, or at the Fleet Intelligence Center Pacific Facility (FICPACFAC) at Cubi Point in the Philippines later during the bombing of North Vietnam during 1972’s Operation Linebacker. Teams of FICPACFAC imagery analysts “operated around the clock processing raw intelligence photography, interpreting it, and using it to prepare targeting lists” during Linebacker. Navy support to targeting efforts during Linebacker played a vital role to operations such as the air campaign that stopped North Vietnam’s conventional invasion of the South, and the mining of Haiphong Harbor.

Unlike today, however, when reachback is enabled by robust wireless and satellite communications, the state of technology at that time meant that unexploited imagery had to be physically couriered from the various sites afloat and ashore in Southeast Asia to Hawaii and back, demonstrating the old intelligence truism that even the best intelligence collection has no impact if cannot get to an analyst who can exploit and then disseminate it to the right decision-maker in a timely and usable form. This dilemma was demonstrated most acutely during Rolling Thunder, which featured rules-of-engagement requiring the Joint Staff at the Pentagon to approve strikes, meaning that wet film of targets like Surface-to-Air Missile (SAM) sites would have to be flown back to the carrier, recovered from the plane, exploited by imagery analysts, transmitted to Washington, and then approved as targets. This lumbering process often allowed the enemy to move their SAM batteries well before an attack was mounted. In this instance the combination of technological limitations and cumbersome command-and-control processes limited the effectiveness of U.S. airpower. It also serves as a reminder for how the current reliance on wireless communications presents vulnerabilities that can be exploited by savvy adversaries that challenge U.S. use of the electromagnetic spectrum by degrading dissemination of intelligence from the analyst to the consumer.

The employment of manned airborne reconnaissance platforms from even before the start of the war demonstrates the desire for better intelligence by both commanders in theater and national leaders during Vietnam, with carrier-based aircraft conducting what is now called Intelligence, Surveillance, and Reconnaissance (ISR) missions being suffering casualties over Laos as early as June 1964. 32 planes from the Navy’s photo-reconnaissance squadrons were eventually shot down during war, with seven pilots killed and five captured. These comparatively heavy losses are possibly the biggest human difference between ISR in Vietnam and the current set of wars prosecuted by the U.S. in the twenty-first century. The extreme risks that North Vietnam’s advanced Soviet air defense network posed to aviators flying manned reconnaissance platforms then contrasts greatly with the virtually threat-free environment that today’s aerial reconnaissance platforms enjoy as they operate with impunity in the skies above places like Iraq and Afghanistan.

Just like today, signals intelligence (SIGINT) can be collected both in the air and afloat, with support during Vietnam from Naval Security Group cryptologists embarked in Navy ships off the coast, and airborne SIGINT collection conducted from P-3 Orion Maritime Patrol and Reconnaissance Aircraft during Operation Market Time.

Navy collectors of Human Intelligence (HUMINT) in Vietnam included Naval Intelligence Liaison Officers (NILO) serving as part of Naval Intelligence Field Organization (NIFO) in Vietnam’s coastal and riverine zones. Perhaps the most impressive HUMINT success took place in 1969 when Navy collection was able to prove that North Vietnam was moving weapons and personnel into the South via Cambodia. This was a victory against both the enemy as well as the national intelligence bureaucracy. Previous technical collection had failed to prove the existence of a Cambodian transshipment node, and strongly-held assessments by CIA, DIA, and the State Department had rejected suspicions that support to North Vietnamese and Viet Cong was being funneled through Cambodia.

Perhaps some of the most insightful observations made in Knowing the Enemy is when it recounts how the desire for better intelligence on the intentions of the North Vietnamese, Chinese, and Soviet rivals of the U.S. ended up driving both military operations and political events, instead of the reverse. Although the U.S. had been involved in the fight in Southeast Asia since the French had been forced out of its former Indochinese colony in the mid-1950s, the main trigger for the “official” start of the war was actually caused by the push for more aggressive intelligence collection.

By the early sixties, U.S. Navy destroyers were regularly conducting intelligence collection missions called “DESOTO patrols,” typically off the coast but outside the territorial waters of the Soviet Union, China, North Korea, and North Vietnam. By 1964 U.S. leaders were pushing for more aggressive DESOTO patrols in order to support South Vietnam’s “Operation 34A” commando raids against North Vietnamese coastal targets. Admiral Harry D. Felt, then serving as Commander in Chief, Pacific (CINCPAC), stated that the “lack of adequate intelligence is a prime factor in the failure of maritime operations,” concluding that Operation 34A needed better U.S. Navy afloat collection to be successful.

The pressure to improve collection by operating U.S. Navy ships closer to the North Vietnamese coast, sometime inside of territorial waters, led directly to the 1964 Tonkin Gulf incident in which the destroyers Maddox (DD-731) and Turner Joy (DD-951), were purportedly attacked by the North Vietnamese Navy, providing the justification for the subsequent Tonkin Gulf Resolution and the closest thing to an actual “start” of the Vietnam War. The authors briefly discuss the controversy over exactly what happened in August 1964, and how intelligence reporting and analysis of those events at the time were used by the Johnson administration to justify a greatly expanded role in Vietnam, noting that “it is now clear that North Vietnamese naval units did not attack Maddox and Turner Joy on 4 August 1964.”

Knowing the Enemy highlights heroes such as Jack Graf, a decorated NILO who, after being shot down during his second tour in Vietnam, escaped from captivity but ultimately went missing; Lieutenant Charles F. Klusmann, a reconnaissance pilot who was shot down over Laos in 1964 but was able to escape; and Captain Earl F. “Rex” Rectanus, the Intelligence Officer for Naval Forces Vietnam (NAVFORV) who stood up to CIA and DIA in 1969, proving that enemy forces were being resupplied via Cambodia. It also includes sections discussing more prosaic challenges like those faced by cryptologists located ashore at bases like Danang who underwent frequent rocket attacks from Viet Cong rebels.

Knowing the Enemy provides a rich resource for those interested in U.S. Naval intelligence efforts in Vietnam, covering the war both chronologically and thematically in terms of how intelligence supported Navy operations off the coast, in the air, on the ground, and in the rivers of southeast Asia. It can be downloaded for free from the Naval History and Heritage Command’ website.

Lieutenant Commander Mark Munson is a naval officer assigned to Coastal Riverine Group TWO. The views expressed are solely those of the author and do not reflect the official viewpoints or policies of the Department of Defense or the U.S. Government.

One thought on “Knowing the Enemy: Naval Intelligence in Southeast Asia”