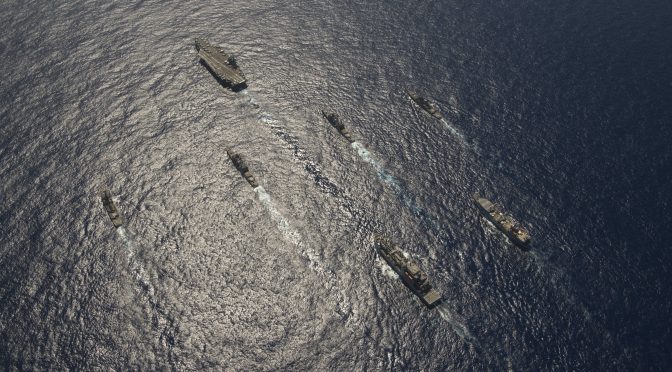 For all the talk of being in great power competition, the OPNAV staff is not acting like it. The Pentagon is famous for slow rolling any senior officer who tries to disrupt the status quo, endangers pet programs, or pushes community-threatening systems. The lower echelons have a strong belief that their pet programs are exactly what the Navy needs to win a war, regardless of how over-schedule, over-budget, or incapable the systems are. They use arguments about great power competition and lethality to defend budget packages, but not to deliver capabilities rapidly. The capability of our fleet still largely looks like it did two decades ago.

Meanwhile, our adversaries are outpacing us in many areas. China will likely deploy unmanned systems in greater numbers than the United States, and far sooner than we can. China, in another example of intellectual theft, has stated that their stealth drone program, the CH-7, is on track for its first flight in 2019 and will reach Initial Operating Capability in 2021. By comparison, glacial acquisition processes and entrenched cultural resistance to change have reduced the U.S. Navy’s MQ-25 program from an unmanned combat aerial vehicle (UCAV) to a humble refueling platform. MQ-25, whose X-47B predecessor conducted carrier flight operations in 2013, might reach the Fleet by 2024. The Chinese fleet of today is virtually unrecognizable from what it was two decades ago.

Should war break out, we must fight with the fleet we have, not the one we wish we had. In 1934, with global peace deteriorating, Congress passed the Vinson-Trammell Act to increase the Navy’s battle count to the London Naval Treaty limit—102 new ships in 8 years. This act provided the fleet that the Navy went to war with in 1941. Quantity matters. Under this act, the Pensacola-class cruisers were developed, optimized to the limits of the Washington Naval Treaty of 1920.

The Navy had many Pensacolas in its inventory by 1941, but it had also continued iterating the platform, eventually arriving at the New Orleans-class. These two classes fought side-by-side in the Solomons. Yet the Navy would have been at a severe disadvantage early in the war had it waited to perfect a new large surface combatant in the 1930s. All ships were needed. A similar situation is playing out with the Large Surface Combatant program, and the Navy is making a mistake by waiting.

It is time to kill our darlings. We cannot deploy the Navy the nation needs with the many pet programs we have. Underperforming programs must go. Follow Secretary Esper’s lead and hold “Night Court” for the Navy—which freed $31 billion for major Army priorities. If the program manager could not articulate how his program supported the Army’s priorities, then funds were shifted elsewhere.

It is time to actually align our budget with our priorities, rather than allow dated legacy programs to dictate the conversation. CNO Gilday must sell Congress on his fresh priorities and make his signature on the Navy’s budget submission reflect them. The Navy and the nation desperately need it.

Lieutenant Commander Ryan Hilger is an engineering duty officer with Strategic Systems Programs in Washington, DC. His views are his own and do not represent the Department of Defense.

6 thoughts on “Kill the Darlings and Pet Programs”