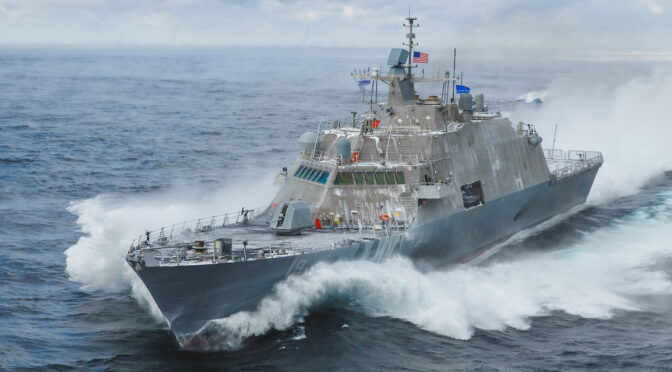 By James Martin and Jasper Campbell

In the spring of 2021, defense-minded internet message boards and social media were ablaze at headlines that the U.S. Navy would be decommissioning the first hulls of the decade-old Littoral Combat Ship (LCS).1 A chorus of “good riddance” posts and thought pieces followed. Though the Navy maintains it intends to keep using both Independence and Freedom variants of the LCS, it is no secret that the program has been beleaguered with class-wide mechanical issues.2 As many in naval thought circles lament and debate what the Navy will do in the way of near shore combatants in contested waters, a unique opportunity has emerged for the U.S. Coast Guard.

The Coast Guard is currently in the throes of one of the largest asset recapitalizations in its history. 9 of 11 National Security Cutters (NSCs) and 40 of 64 planned Fast Response Cutters (FRCs) are in service, and 25 Offshore Patrol Cutters (OPCs) are planned.3 The service also plans to acquire 6 icebreakers and a fleet of waterways commerce cutters.3 Based on a legacy fleet size circa 2007, this profound growth represents a 20% increase in cutters.4 But is this sufficient, given the global demand signal for the unique combination of soft power, capabilities, authorities, and agreements the Coast Guard brings to the national security table?5 This demand is compounding yearly, with the service continuing their obligations in the Polar Regions and the Middle East, alongside new commitments in the Indo-Pacific, Oceania, and Mediterranean.6

The Coast Guard’s acquisition boom will simply replace its legacy stable of assets; if the service expects to operate successfully as a global representative of U.S. interests, it will need every additional hull it can get. While the fraught LCS program leads many to ponder its future in the Navy, the Coast Guard could inherit a boon in the now 31-hull LCS program and close this gap.

Not as Ridiculous as it Seems!

On its face, the Coast Guard accepting a problematic class of ships from the Navy is foolhardy and irresponsible. After all, why does the Coast Guard need an LCS fleet when the OPC, slated to replace the current medium endurance cutter fleet, is scheduled to come online in 2022? When one peels back the layers, the OPC becomes less of an immediate salve. The first OPC Argus is still very much under construction at the small Florida-based Easter Shipbuilding.7 24 more ships are planned at $441 million a piece, but the contract will likely be rebid at other shipyards with the possibility for growth on the initial cost per vessel.7

With this in mind, it would be rash to assume at the very outset of a 25-hull acquisition program that the next sixteen years of shipbuilding will be executed without a hitch and on schedule. This does not account for further casualties befalling the ancient Reliance and Famous-class cutters, which are nearing 70 and 30 years of age, respectively.8 One need only look back to the NSC acquisition program’s not insignificant cost overruns, delays, and rework to get a feel for how the OPC acquisition program may progress. The risk grows quickly when one considers it would not take much of a production delay or too many debilitating casualties to place the aging medium endurance cutter fleet at a significant deficit.

While the Freedom-class variant of the LCS has faced myriad mechanical issues, one need only look to the history of the nearly 70-year-old Reliance-class cutters for a blueprint of how the Coast Guard could turn the LCS program around to the benefit of the service. In its original conception, the 210-foot Reliance-class was designed with a Combined Diesel and Gas (CODAG) propulsion system.9 Just four years into the program, the Coast Guard scrapped this more complicated system in favor of a simpler, “bullet-proof” diesel power plant.9 Though the cutters have since undergone mid-service life overhauls, similar diesel power plants still drive the cutters today, powering the full spectrum of Coast Guard missions.

Conveniently, the long suffering LCS employs a similar CODAG system.9 It is not far-fetched to conceive that the Coast Guard would be able to reconfigure the complicated and electrically dependent LCS propulsion system for a fraction of the OPC’s cost. When one considers that the Coast Guard’s annual budget hovers around $12 billion and factors in the simultaneous recapitalization of several ship classes at once, taking on the LCS program would save the service precious resources for other priorities. By reconfiguring the ships, the Coast Guard would likely eliminate several of the outstanding complaints of the LCS, including maintenance costs and woefully short endurance.

The simpler power plant configuration would eliminate byzantine electrical problems and reduce maintenance to the size and scope of modern Coast Guard platforms, such as the NSC. Second, by jettisoning the fuel hungry CODAG plant, the LCS would have significantly more endurance to carry out the spectrum of Coast Guard missions. Originally conceived to operate at sprint speeds in world’s maritime flash points, the LCS would still be able to achieve respectable speeds without requiring weekly stops for fuel or the support of an oiler to be successful at its assigned mission.10 Critics would do well to note that the OPC was designed with no turbines and a max speed of 20 knots, because the Coast Guard determined these speeds would not be needed for the OPCs mission set.11 Essentially, an LCS power plant reconfiguration would result in no significant loss of capability relative to intended future medium endurance cutter performance.

Taken in sum, these considerations illuminate that the prospect of the Coast Guard inheriting the 31-hull LCS program is not as fanciful as it might seem at first blush.

We Have Done it Before

Repurposing a highly capable Navy platform for the Coast Guard mission set is not a new idea. In March of 2000, a Coast Guard crew painted the trademark racing stripe on a 179-foot Navy Cyclone-class patrol ship, originally the USS Cyclone, and renamed it the USCGC Cyclone (WPC 1). Cyclone served as a Coast Guard cutter for four years, during which its capabilities in performing Coast Guard missions were thoroughly tested. Clearly, the assessment was a positive one, as four more Navy Cyclone-class platforms were commissioned as Coast Guard cutters in 2004, enjoying up to seven years of service. While not particularly enduring by Coast Guard standards, the Cyclone-class’ tenure with the Coast Guard is generally perceived positively; the platform’s speed and maneuverability are frequently cited as advantages.12

Beyond immediate use, it is clear that the Cyclone’s stint with the Coast Guard served a broader impact. Compared side by side, the Cyclone and later commissioned Sentinel-class (FRCs) possess a remarkable number of shared characteristics — similar tonnage, dimensions, crew compliment, and endurance — all indications that operators saw value in the platform (short of the precision-guided munitions and grenade launchers). It is likely a number of characteristics and associated requirements, gleaned from Coast Guardsmen’s experience on the Cyclone-class eventually made their way into the FRC’s final specifications. Beyond just decreasing the gap between demands on the service and available assets to satisfy it, the LCS would prove an extremely fruitful testbed for informing future acquisitions.

While fiscal practicality is a fine reason for the Coast Guard to consider taking on the fraught LCS program, there are positive practical considerations for implementing the transition as well. Despite headlines lamenting its shortcomings, the LCS has enjoyed success in the U.S. Southern Command area of responsibility conducting one of the mainstays of the Coast Guard mission-set: Counter Narcotics enforcement.13 Additionally, provided the aforementioned mechanical issues could be addressed, a 31-strong LCS fleet would be available for relatively immediate transition, allowing the Coast Guard to scale operations more rapidly than if constrained by the OPC’s projected acquisition cycle.

As the Coast Guard has proved its utility in the global arena, its mission set has grown to be viewed as a potent combination of diplomatic soft power and military hard power. Combined with hyper-competent mariners and unique law enforcement capabilities, the Coast Guard has never been in greater demand. It is ideally suited to perform the largely constabulary and diplomatic missions required in the Polar regions, Middle East, Indo-Pacific, Central and South America, Africa’s Western and Eastern coasts, and Mediterranean. This paradigm shift will unburden the U.S. Navy to focus on the high-end warfighting.

With the specter of strategic competition looming over the world’s maritime flashpoints, a Coast Guard manned and reconfigured LCS fleet may be the proverbial “easy button” to meeting the unprecedented demands on the service without waiting 10-15 years for the realization of a fully-fledged OPC program. In a dynamic global environment where the Coast Guard has ever new commitments on the horizon, taking a chance on an asset like the LCS represents a prudent exercise in strategic risk management. After all, beggars can’t be choosers, and in today’s security environment, neither can the Coast Guard.

Lieutenant James Martin is a Coast Guard Cutterman who has served aboard three Coast Guard cutters, including as commanding officer of the USCGC Ibis (WPB-87338). He holds a bachelor’s degree with honors in naval architecture and marine engineering from the U.S. Coast Guard Academy.

Lieutenant Jasper Campbell served on active duty for six years in the afloat and C5I communities. He is currently on a sabbatical, launching a technology startup, and hopes to return to sea in 2023 upon resuming active duty. He holds a bachelor’s degree in electrical engineering from the U.S. Coast Guard Academy.

6 thoughts on “In Dire Need: Why The Coast Guard Needs the LCS”