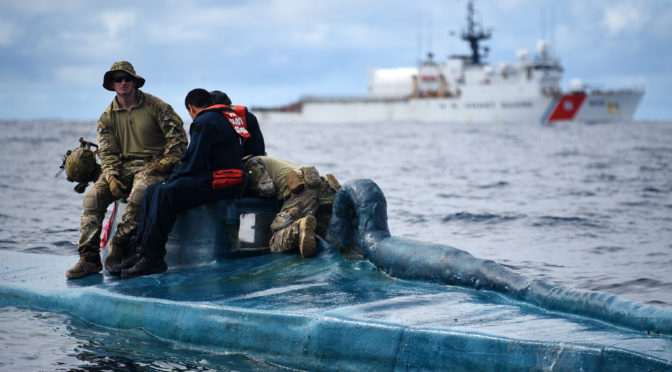 On April 1, President Trump announced that the United States is doubling its counternarcotics operations in the Western Hemisphere. The administration is concerned that illicit actors in Venezuela will exploit the focus on the COVID-19 pandemic to smuggle narcotics undetected. It deployed Navy destroyers, combat ships, aircraft and helicopters, Coast Guard cutters, and air force surveillance aircraft to suppress drug trafficking coming toward the U.S. The move includes forces in the Caribbean and eastern Pacific, but the Trump administration appears particularly concerned with Venezuela.

The country lacks maritime intelligence and enforcement capacity. Corruption, poverty, and food insecurity are leading to increased crime on land and at sea. Drug trafficking in Venezuela does appear to have increased and the U.S. has the tools to fill this gap, with the strongest and largest navy in the region.

However, while this increased presence is likely to result in more seizures over the short-term, it cannot change the root drivers of illicit maritime activity. A more sustainable solution requires more than increased assets on the water for search and seizure. Furthermore, without supporting local organizations and addressing the conditions driving so many Venezuelans to illicit activities, the impacts of the effort will not be sustainable. The following enhancements could improve the U.S. effort to reduce drug trafficking and help ensure a lasting solution.

Illicit actors can conceal drug trafficking. A robust maritime security approach requires a holistic perspective on maritime crime. Illicit actors around the world display a great deal of agility and ability to conceal their activities. In 2019, the U.S. Coast Guard confiscated $466 million worth of cocaine concealed on fishing vessels along the Pacific Coast of Central America and Mexico. Because illegal fishing often goes unnoticed and generates lower penalties, it is a convenient cover for more high-penalty crimes like drug trafficking. Drugs are even smuggled inside fish.

The U.S. must be sensitive to shifts toward other illicit crimes. In the Caribbean, maritime enforcement has largely focused on drug trafficking. However, illicit actors have diversified their activities. Gold and fuel smuggling have also become common. While these goods appear more innocuous than drugs, they provide an important funding source for illicit actors. Venezuelan criminal groups own mining towns and manage trafficking routes into bordering Colombia and Brazil, generating violence, conflict, and instability. Gold mining in Venezuela has even been compared to West and Central African blood diamonds. And those hardest hit are indigenous local groups that are being immersed in violence and pollution from mining operations. Many Venezuelans are also forced into illicit gold mining because of low wages and are subsequently required to pay criminal gangs large portions of their earnings.

Venezuelan criminals have also turned to the maritime space, stealing boat engines, conducting robberies, and even conducting kidnap-for-ransom operations. Low-priced fuel is being smuggled through Venezuela and traded to neighboring countries. This displays the array of options from which illicit actors in Venezuela can generate funds. Funds from these activities will help illicit actors sustain their funding and networks, and ease their return to narco-trafficking once the U.S. redeploys its assets.

The U.S. must balance its efforts with a geographic focus on the Pacific. The United States may not effectively combat drug trafficking with its focus on the Atlantic. Illicit actors are also geographically flexible. Due to a strong focus on anti-narcotics enforcement in the Caribbean, much of the cocaine traffic has shifted to the Pacific coast. 84 percent of confiscated South American cocaine is routed through the Pacific. In fact, more cocaine appears to be traveling through the Galapagos than the Caribbean, where illicit actors can travel undetected or disguise themselves as fishers.

Some of the U.S. naval forces are being directed at the eastern Pacific, with a recent seizure of 1,700 pounds of cocaine off the Pacific coast of Central America, but this illustrates the geographic agility of narco-traffickers and the need for maintaining sufficient resources so that investment in one domain does not come at the expense of the other.

In order for the U.S. operation to be perceived as legitimate as possible and be able to counter illicit maritime operations in the long-term, the U.S. should support capacity building for regional organizations like CARICOM-IMPACS and RSS to more effectively fulfill their mandates. This will also enable the U.S. to ultimately spend fewer resources in the region.

The U.S. must be mindful of threats to conflict and coastal welfare. One of the most important root causes of illicit trafficking is poverty and insecurity on land. In Venezuela, food insecurity and a lack of viable livelihood opportunities are turning citizens to illicit crime. In 2017, the average Venezuelan lost 24 pounds, and 90 percent of the country is now living in poverty. Food and economic insecurity and violence in Venezuela has catalyzed four million migrants and refugees to leave the country. These conditions are causing many Venezuelans to turn to illicit crime for survival. With more pressure against Venezuela, the United States may only push more Venezuelans into desperation. If it wants to develop a long-term solution to illicit trafficking in the region, it is vital for the United States to consider the impacts of its decisions on coastal welfare.

The United States has the largest and most advanced navy in the world, and is an important actor in the Caribbean region and the Western Hemisphere as a whole. Increased maritime enforcement is vital, especially to combat drug trafficking in the region. However, aiming to control drug trafficking will not make these criminal groups disappear. They will take alternate routes and capitalize on trading other illicit goods. In order to establish a sustainable and peaceful approach to the region’s maritime security challenges, the U.S. must take a holistic approach to maritime security threats and empower local organizations to solve regional security challenges at their source. The U.S. will be spending a great deal of time and resources in this effort. It is important to generate a long-term solution to the problem, lest the U.S. find itself in an expensive, endless battle against drug trafficking.

Laura Burroughs has served for five years at the NGO One Earth Future (OEF) that works closely with the UN, navies, and the private sector. She has experience in maritime security, facilitating sessions, and developing reports for the Caught Red-Handed project – a series of workshops hosted by the United Nations Office on Drugs and Crimes (UNODC) to promote interagency coordination to improve maritime security.