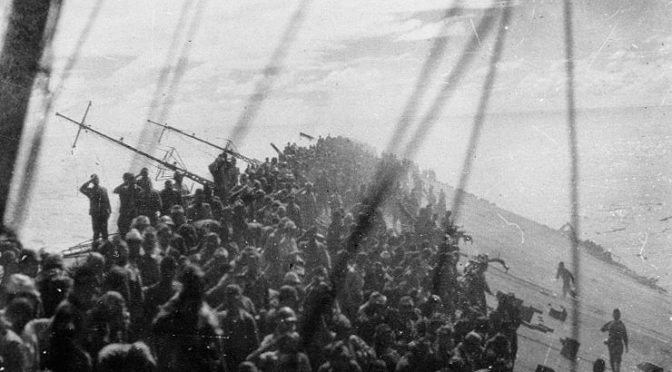 General MacArthur’s operational idea, eventually embraced by Admiral Nimitz, President Roosevelt, and the Joint Chiefs, was to retake the Philippines as an intermediate base of operations from which to launch air strikes against Formosa, and eventually the Japanese home islands. Leyte was selected as the initial entry point to the Philippines because it had an “excellent anchorage” and was a location from which land-based bombers could reach all parts of the Philippines, the coast of China, and Formosa.1

The Japanese Imperial General Headquarters had a strong feeling that the two prongs of the American offensive would converge on the Philippines in what Milan Vego would describe as a penetration maneuver, where the attacker seeks to break up or penetrate a selected sector of the defender’s main line of position and move into his rear area.2  Japan’s most critical Sea Lanes of Communication (SLOC) to the southern resource area ran through the Philippines. The Luzon Strait was an especially important SLOC. According to Donald Chisolm, the southern resource area provided 75 percent of the world’s rubber, 66 percent of the world’s tin, and had initially given Japan self-sufficiency in petroleum.  U.S. anti-shipping activities through 1944 had already reduced Japan’s oil supply to a trickle. Losing the Philippines would run the well dry.3

When U.S. forces landed in Leyte, Japan had prepared a quick counterattack in the hope of forcing the Mahanian battle they had sought since Midway. To destroy the U.S. fleet and retain the Philippines, Japan’s SHO-1 plan involved a double envelopment maneuver that required careful synchronization between diversionary and attacking forces.

Prior to the initiation of the principal line of operation, the first ancillary line was initiated by Vice Admiral Halsey’s Fast Carrier TF 38. TF 38, which included carrier groups TG 38.1, 38.2, 38.3 and 38.4, attacked Japanese air bases in Okinawa, Luzon, and Formosa. By destroying more than 500 aircraft and reducing Japan’s cadre of newly trained pilots, this initial ancillary line of operation reduced Japan’s air capacity to challenge the U.S. movement into Leyte.

A second ancillary line was the protection of the landing operation. This ancillary line had two operational commanders. Admiral Kinkaid had tactical control of multiple Seventh Fleet components, including the Fire Support Group TG 77.2, the Close Covering Group TG 77.3, the Escort Carrier Group TG 77.4 under Rear Admiral Sprague (which included the carriers assigned to Taffy 1, 2, 3 and 4), and the PT boat squadrons assigned to TG 70.1. Also providing protection to the landing operation was Halsey’s Fast Carrier TF 38, over which MacArthur did not have operational control. TF38 transitioned from the first ancillary line to this second ancillary line after the initial landings were completed. Halsey reported directly to Nimitz at CINCPAC and had a supporting relationship with MacArthur and Kinkaid.  Arguably, the lack of unified command over this secondary but critical line is one of the reasons that the Leyte operation was put at risk when Halsey uncovered the San Bernardino Strait to pursue the Japanese Northern force.

The deployment of the U.S. submarines DARTER and DACE to intercept and reduce Kurita’s Center Force as it approached the operating area may be considered a third ancillary line, especially since the subs were strategic assets that remained under CINCPAC control.

To counterattack against the U.S. invasion, Japan had one principal and one ancillary line of operation.  According to Vego, Japan’s principal line of operation was the Center Force under Vice Admiral Kurita that intended to penetrate the San Bernardino Strait and attack U.S. landing forces at Tacloban. Vego said the Southern Force under Vice Admirals Shima and Nishimura that intended to transit Surigao and attack the U.S. landing force from the south was an ancillary line.4  One could argue that the Center and Southern forces were either: (a) two pincer components of one principal line of operation; or (b) two separate principal lines. The diversionary Northern force under Vice Admiral Ozawa was the ancillary line intended to divert the U.S. fast carrier task forces to the north, so that they could not threaten the Center and Southern Forces.

As the battle evolved, Japanese lines of operation remained static. However, U.S. lines shifted between 24-25 October. Halsey created a new line of operation when he transitioned TF 38 from a covering force to an offensive force focused on Ozawa’s Northern force.  Admiral Kinkaid created two new lines of operation when he detached Rear Admiral Oldendorf to guard Surigao Strait with his battleships, cruisers, destroyers, and PT boats against the Southern Force, and Rear Admiral Sprague to defend against Center Force which came through San Bernardino.

Basing Structure and Impact on Operations

Per Vego’s definition, a base of operations should provide multiple short lines of operations.5 Before Leyte, Japan occupied what Vego called a “central position with respect to the adjacent Asian landmass and any hostile force approaching from across the Pacific.”6 Compared to the U.S., Japan had multiple relatively short interior lines of communication. The Japanese home islands were the main base, and Luzon was an intermediate base.

However, as explained by Chisolm, Japan’s combined interior lines totaled more than 18,000 nautical miles and the Luzon Strait was a significant choke point in that network. The Japanese had not built sufficient submarines or destroyers to protect those lines and they had not built sufficient shipping capacity to make up for losses due to U.S. anti-shipping efforts.7 So, although Japan had a base of operations with multiple short interior lines, the U.S. found the weak points in that base early in the war and attacked it with the submarine force. Then, in the campaigns leading up to the Leyte operation, U.S. forces eliminated several of Japan’s fleet oilers. As a result, after the Battle of the Philippine Sea, Japanese carriers returned to home waters where they could be protected by land-based aircraft and continue to train pilots. Japan’s other large combatants moved to Lingga Roads (Singapore), where they had access to oil, but less access to ammunition and less ability to operate with the carriers.

Thus, in the summer of 1944, the Japanese basing structure was already significantly weakened. If the U.S. was able to dislodge Japan from their intermediate base in Luzon, they would essentially turn Japan’s network of interior lines into a network of exterior lines, vulnerable not only to continued submarine attack, but also to land-based air attack.

In comparison, the U.S. occupied what Vego calls an exterior position in the theater. The U.S. mainland was the main base of operations, and Hawaii was an intermediate base. As explained by Chisolm, the U.S.’s exterior lines into the South Pacific were extremely long – more than six thousand miles from the U.S. mainland, and more than two thousand miles from Australia.8 However, the U.S. exterior lines were not as vulnerable as the Japanese interior lines. While the Japanese fleet was suffering from attrition, the U.S. fleet was expanding, and each month was able to increase the number of escort resources dedicated to the protection of shipping. And while Japan’s link to their southern resource area was becoming increasingly tenuous, CONUS-based war production was hardly resource-constrained.

Decisive Points in the Operation

Vego defines a decisive point as a geographic location or source of military or non-military power to be targeted for destruction or neutralization.9 As Vego suggests, the San Bernardino and Surigao Straits were decisive points for the Japanese heavy surface forces in their intended advance to Leyte Gulf.10 However, for Japan, the most decisive point in the operation was in the Leyte Gulf itself, where the U.S. landing force would be vulnerable and where the Seventh and Third fleets would be protecting the landings. It was there that Admiral Toyoda planned for his pincers to join in a combined action against the U.S. fleet, ideally with a Mahanian ending.

In contrast, prior to Japan’s counter attack, U.S. forces focused on two decisive points: the northern and southern landing zones on the west coast of Leyte. When Japanese forces counter-attacked, the U.S. changed focus and saw the two straits, San Bernardino and Surigao, as the most decisive points. As a result, Admiral Kinkaid massed the firepower of his surface fleet in the Surigao Strait and expected the airpower of Halsey’s TF 38 to cover San Bernardino.

MacArthur’s operational idea of capturing the Philippines to create an intermediate base of operations for air strikes against Formosa and the Japanese home islands worked. Seven years after Leyte, Nimitz said “from hindsight . . . I think that decision was correct.”11  In summary, U.S. lines of operation were more flexible and less interdependent than the Japanese lines of operation. Ironically, the external U.S. basing structure, when looked at holistically, had greater durability than the internal Japanese basing structure. Also, the U.S. more effectively concentrated kinetic effects on specific decisive points in the geography, and specifically in the Surigao Strait. U.S. forces ultimately won at Leyte because they better exploited the geometry of the operating area.

Daniel T. Murphy is a Lieutenant Commander in the U.S. Navy, currently serving in the Office of Naval Intelligence. In his civilian career, he is a full-time professor at Massachusetts Maritime Academy, and an adjunct faculty member at Northeastern University. Lieutenant Commander Murphy earned his bachelor’s degree from the University of Massachusetts, and master’s degrees from Georgetown University and from the National Intelligence University.

The views expressed in this paper are those of the author and do not reflect the official policy or position of the Department of Defense, the U.S. Navy, or the U.S. Government.

Featured Image: The crew of the Japanese aircraft carrier Zuikaku salute as the flag is lowered during the battle off Cape Engaño, October 25, 1944. (Wikimedia Commons)

2 thoughts on “The Geometry of War at Sea: The Leyte Gulf Example”