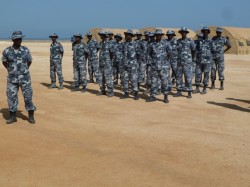 The rise, fall, and rebirth of the Puntland Maritime Police Force (PMPF) is a bizarre and thrilling story that I have been following, to the point of obsession, for the last two years. As CIMSEC readers are surely aware, one is hard pressed to find a report on Somali piracy that does not advocate an onshore solution for this maritime crime.

When it came to actually establishing security and rooting out pirate bases in the autonomous region of Puntland however, it was not NATO, the EU, the U.S, or U.K. that took the lead, but a South African private military company financed by the United Arab Emirates.

The PMPF has earned international praise for denying pirate gangs an onshore sanctuary and for rescuing hostage mariners, but has also been labeled an unaccountable private army by UN monitors. Despite international pressure, financial arrears, and pirate infiltration the PMPF and its South African mentors continue to march on. With piracy now largely eliminated, the marines appear to have engaged a new foe—the Islamist insurgents of al-Shabaab.

“The Wild West in East Africa” by James Bridger and Jay Bahadur.

Note: The views expressed are solely those of the authors and do not necessarily represent those of their governments, militaries, employers or the Center for International Maritime Security.

7 thoughts on “From Fighting Piracy to Terrorism, the PMPF Saga Continues”