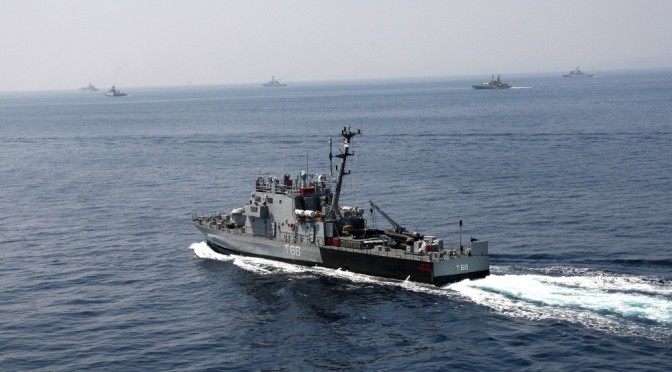 What could be the trend lines for 2015 in the Indian Ocean? A quick survey of events, incidents and trends in the Indian Ocean during 2014 suggests that the region witnessed cooperation, competition and inclusiveness among the littoral states.

Three baskets could be identified: geopolitical, geostrategic and geo-economic, to help forecast trends in 2015. However, a caveat is in order i.e. these baskets can spring a number of surprises, given that ‘prediction is a risky business’.

IORA: Moving from Australia to Indonesia
In the geopolitical domain, the region remained peaceful and pan-Indian Ocean multilateral organizations such as the Indian Ocean Rim Association (IORA) and Indian Ocean Naval Symposium (IONS) were proactive and provided the platform and leadership to address issues of common interest among the partner states. The Perth Communiqué released in September 2014 reinforced the Association’s commitment to ‘building a more stable, secure and prosperous Indian Ocean region’ and promote the IORA’s six priority areas of cooperation. The regional navies met under the IONS banner and addressed a number of common security issues confronting the region.

Later in 2015, the IORA baton will pass from Australia to Indonesia who would continue to carry the great work done by the earlier Chair – India. The new government in Jakarta led by President Joko Widodo has endorsed the importance of maritime matters through the establishment of a new Coordinating Ministry for Maritime Affairs and announced the doctrine of ‘global maritime axis’ (poros maritim dunia). In addition, South Africa, the next Vice Chair of IORA, will prepare to take the leadership role in 2017. These provide ‘continuity and purpose’ to the IORA.

India was also ruffled by the Chinese Maritime Silk Road (MSR) initiative and its growing popularity among a number of Indian Ocean states particularly Bangladesh, Sri Lanka and Maldives. New Delhi believes that the MSR can potentially help China consolidate its naval / maritime strategy of access and basing in the Indian Ocean in support of PLA Navy’s future operations.

Continuing US Anchor
The US will continue to be the strategic anchor and security provider in the Indian Ocean and its role welcomed by the regional countries to ‘correct security imbalances, challenge the hegemony of any dominant power and ensure regional stability’.

Likewise, the UK decision to permanently position a number of power projection platforms  in the Persian Gulf prompted New Delhi to recall the idea of  Indian Ocean ‘Zone of Peace’ and withdrawal of extra regional naval powers from the Indian Ocean.

2015: End of Piracy, Attractiveness of Drug smuggling and Re-emergence of Maritime Terrorism in the Indian Ocean
One of the important positive developments in the Indian Ocean was the near total suppression of piracy in the Gulf of Aden / Somali coast. It took eight years for the naval forces from nearly two dozen countries including a number of UN Security Council resolutions, to send pirates back home.

However, another ugly face of illegal activities at sea i.e. drug smuggling appears to have caught the attention of the Indian Ocean countries. During 2014, the multinational forces operating in the Indian Ocean intercepted a number of dhows/boats carrying narcotics from South Asia bound for destinations in East Africa. Perhaps what is more disturbing is that east coast of Africa emerged popular among drug smugglers from Colombia. Kenyan President Kenyatta’s initiative to oversee the destruction of a vessel carrying about 370 Kilograms of heroin worth US $ 11.4 million in international market exhibited Indian Ocean countries resolve to counter global trade in narcotics.

The rise of the Al Qaeda in the Indian Subcontinent (AQIS), the new wing of the Al Qaeda, has already raised a new threat whether Pakistan will become a haven for maritime terrorism.

Will 2015 see the idea of “Blue Economy” leaping forward?
The geo-economic environment in the Indian Ocean witnessed the emergence of a new concept ‘Blue Economy’ led by Seychelles and Mauritius. The idea is resonating among a number of Indian Ocean littorals including Australia, Indonesia, Bangladesh, South Africa to name a few. The leaders are committed to the sustainable development of living and non-living marine resources to enhance food and energy security.

Will 2015 ensure better Search and Rescue Coordination?
Perhaps the most traumatic and heartrending events in 2014 were the tragic loss of Malaysian Airlines flight MH 370 in the southern Indian Ocean, which still remains a mystery, and the more recent loss of Air Asia flight QZ 8501 in the Java Sea. These were stark reminders of the need to develop robust search and rescue (SAR) mechanism in the Indian Ocean. Yet, these incidents exhibited the Indian Ocean countries’ commitment to provide ‘public goods at sea’ and a number of navies deployed their navies for SAR.

This article is courtesy Institute of Peace and Conflict Studies (IPCS), New Delhi and originally appeared at http://www.ipcs.org/article/china/ipcs-forecast-the-indian-ocean-in-2015-4797.html It is a precis of the larger document of the same name, that is part of the IPCS’s ‘Forecast 2015’ series. Click here to read the full report.