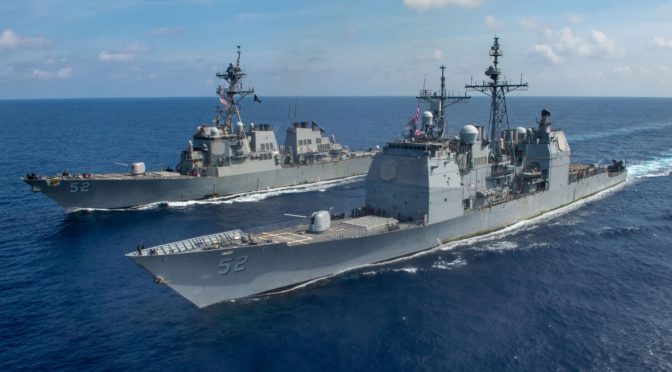 More than simply focusing on the size of the fleet, we should be concerned with capability, lethality, and our ability to generate forces and deployed presence. Any major changes to our fleet structure should come through serious analysis that balances lethality with force projection.

As a counterpoint to simply growing the size of the Navy, we have failed to make adequate investments in the infrastructure that allows us to maintain and deploy the existing fleet to its full capability. Public shipyards are at maximum capacity, and our private shipyards are not optimized to complete maintenance in a timely and efficient manner. Any commitment to grow the size of the fleet must have an accompanying investment in the infrastructure to grow and sustain the industrial base to support a fleet of this size.

Recently, Michele Flournoy wrote the U.S should be able to “credibly threaten to sink all of China’s military vessels, submarines, and merchant ships in the South China Sea within 72 hours.” I agree with this type of strategy that would focus our naval efforts on a narrow goal that would achieve and preserve maritime dominance in the Western Pacific. With such a defined goal, we could design a fleet not based on size, but based on capability. Deterrence must be credible and is only effective when an adversary believes, through our daily actions, that the cost of their armed aggression will be met with such overwhelming force (damage) that the loss would be too extreme for the benefit.

The failure of current and past administrations to translate a national strategic vision into actionable long-term goals for the U.S. military necessitates additional Congressional involvement, and not just with purse strings or oversight, but with a seat at the table to develop the National Defense Strategy (NDS). Additionally, the national strategic vision should be signed into law so that it extends beyond the terms of elected officials and military leadership.

This new force structure may be used to execute Navy and Marine Corps warfighting concepts, including Distributed Maritime Operations (DMO), and Expeditionary Advanced Base Operations (EABO). These concepts and the new fleet design embody leadership’s thinking on the nature of future warfighting tactics and operations. Are these warfighting concepts mature or flexible enough to provide a long-term foundation for building this redesigned fleet? Are trends in tactics and technology adequately captured?

I am concerned that neither DMO nor EABO are mature enough to be used as a basis for developing the foundation for a redesigned fleet. Particularly in the technology realm, the Navy and Marine Corps combat systems and communications systems have many interoperability shortcomings. DMO specifically requires a robust network of sensors and communications that allows seamless interoperability. Although we have focused on joint interoperability in the past few decades, there are still many challenges to providing a seamless joint network, which has been exacerbated by a piecemeal modernization strategy.

Current levels of shipbuilding funding cannot grow to and sustain a 355-ship fleet, much less a 500-plus ship fleet. Far too often we field technology for technology’s sake without having a fully developed plan that dovetails costs like maintenance and increased end-strength requirements to crew these vessels. Current shipbuilding programs have been plagued by cost overruns, production delays, and other issues related to technology insertion on first-in-class vessels, like the Ford-class carriers. All of these costs must be considered upfront when planning for the future fleet. Current Navy budget levels will not be sufficient to grow and sustain the fleet proposed by the Secretary of Defense.

The founders of this country understood the importance of the Navy to maintain freedom of navigation, freedom of trade, and power projection. The constitution states that it is the responsibility of Congress to “Raise and support Armies,” but to “provide and maintain a Navy.” The distinction between the Army and the Navy outlined in the constitution is critical, because the founders understood that regardless of peace or war, the country must have a robust Navy.

I think there need to be hard conversations in the Pentagon and on Capitol Hill about the allocation of resources between the services. A defined national strategic vision developed jointly by the legislative and executive branches would allow these tough conversations to take place. Some legislators, including Rep. Joe Courtney (D-Conn.) and Rep. Rob Wittman (R-Va.) who serve as the chairman and ranking member of the House Seapower and Projection Forces subcommittee, respectively, have long advocated for the funding of the SSBN program to reside in the National Sea-Based Deterrence Fund (NSBDF). This would be a good start to free up funding for additional shipbuilding in the Future Years Defense Program (FYDP), and I fully support moving the SSBN program to the NSBDF. One could make the argument for other strategic programs to be funded similarly as we engage in the modernization of our nuclear deterrent.

An additional area of focus that I will be working on in the upcoming Congress is the role of civilian mariners within the Navy. Currently, civilian mariners man logistics, sealift, special mission, and many other ships—over 130 in the Military Sealift Command (MSC) inventory. Although MSC has operated hybrid crewed ships (civilian mariners and military) for some time now (e.g. USS Mount Whitney, USS Ponce), the introduction of the Expeditionary Sea Base (T-ESB) advances the potential for civilian mariners to play a larger role in the Navy. There are legal hurdles to overcome, but one should examine constructs such as the Royal Fleet Auxiliary Landing Ship Dock program to see the possibilities of a hybrid crew on a traditional warship.

The Goldwater-Nichols Act of 1986 removed strategic planning as a primary responsibility of the Chief of Naval Operations and moved the responsibility to various other entities, including the Office of the Secretary of Defense, the Joint Staff, and the Combatant Commanders. However, responsibility for developing the force structure assessments and 30-year Shipbuilding Plan remained with the Navy.

So one hand is developing the strategy and another the means to deliver the strategy, but neither is fully delivering. As previously mentioned, additional congressional involvement must be a top priority in the 117th Congress in developing a national strategic vision, and I believe this must include revisiting Goldwater-Nichols.

Building the right fleet should be a national priority. Our main global adversary is China, so future conflicts are likely to be naval. Again, it is not about the size of the fleet, but the capability that fleet brings to the fight. Building a fleet of this size would enhance American naval presence around the world.

But I maintain my concerns about the makeup of this new fleet and that its composition must be framed by defined objectives and concrete goals that support our National Defense Strategy. Our shipyards are challenged to keep up with maintenance of our current fleet, so this will also require intensive investment in the industrial base to ensure that both our existing and new vessels remain functional and readiness is enhanced. More than just fleet size, we should also think about capability and lethality.

The next step is for Defense Secretary Esper, Navy Secretary Braithwaite, and other top Defense Department officials to explain the assessment to congress.

Recently, my colleague, Rep. Mike Gallagher (R-Wis.) proposed that members of congress participate in wargaming at the Naval War College. I think this would be a good start, but Congress needs to understand the requirements being proposed and why. Most members of Congress don’t understand specifically the needed mix of ships, aircraft, and missiles required to prevail in a conflict with China. Congressional buy-in will be critical as we determine funding levels for each acquisition program, maintenance, and readiness requirements.

Congresswoman Elaine Luria represents Coastal Virginia, home to the world’s largest naval base. Before running for Congress, Elaine served two decades in the U.S. Navy, retiring at the rank of Commander. A Surface Warfare Officer who operated nuclear reactors, she was one of the first women in the Navy’s nuclear power program and among the first women to serve the entirety of her career on combatant ships. Of all members in the House Democratic Caucus, she served the longest on active duty, commanding hundreds of sailors and deploying six times to conduct operations in the Middle East and Western Pacific. Congresswoman Luria serves on the House Armed Services Committee, where she is Vice Chair of the Seapower and Projection Forces Subcommittee, and on the House Veterans Affairs Committee, where she is the Chair of the Disability and Memorial Assistance Subcommittee.

One thought on “Force Structure Perspectives: Congresswoman Elaine Luria on Getting Congress Involved”