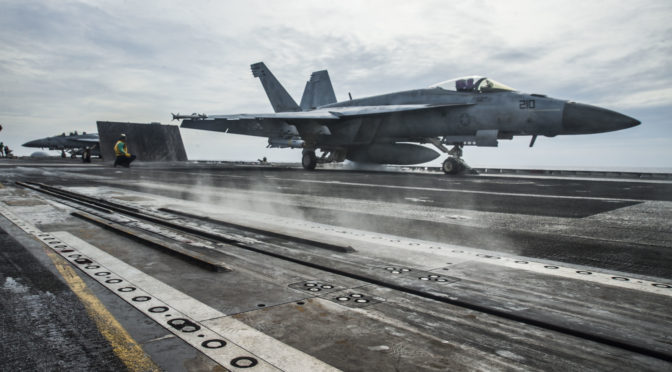 As a part of CIMSEC’s Force Structure Perspectives Series, CIMSEC discussed the Battle Force 2045 fleet design with Capt. Robert Rubel (ret.), who served as the chair of the Naval War College’s wargaming department and dean of the College’s Center for Naval Warfare Studies. In this conversation, Capt. Rubel discusses the Navy’s longstanding aversion to distributed force structure elements, why the Office of the Secretary of Defense may have seized the process of fleet design, and how to move the fleet toward move effective strategic and tactical dispersion.

From one perspective, the Secretary’s plan is encouraging. A number of us armchair admirals have been advocating for such a redesign since the late 1990s. Notably, the late Professor Capt. Wayne Hughes, long-time chairman of the Operations Research Department at the Naval Postgraduate School, advocated for what he called a “bi-modal” Navy consisting of a mix of ships similar to what both the Hudson Institute and Cost Assessment and Program Evaluation (CAPE) office came up with.

The notion of a mixed fleet was at least euphemistically embedded in the 2007 national maritime strategy, A Cooperative Strategy for 21st Century Seapower (CS21). It called for “credible combat power” to be concentrated in the Middle East and the Western Pacific with “globally distributed, mission tailored” forces being dispatched to other areas to carry out an array of peacetime missions, including maritime security, and disaster relief and humanitarian assistance operations. This concept was the result of an input to the strategy development process by Prof. Hughes. It seemed congruent with the document’s sweeping assertion that the Sea Services would deploy globally to “…protect and sustain the peaceful global system comprised of interdependent networks of trade, finance, information, law, people and governance.” Such a comprehensive approach to defending a favorable world order clearly called for a large and strategically dispersed Navy, and this prospective fleet design appears to deliver such a force.

This new force structure may be used to execute Navy and Marine Corps warfighting concepts, including Distributed Maritime Operations (DMO), and Expeditionary Advanced Base Operations (EABO). These concepts and the new fleet design embody leadership’s thinking on the nature of future warfighing tactics and operations. Are these warfighting concepts mature or flexible enough to provide a long-term foundation for building this redesigned fleet? Are trends in tactics and technology adequately captured?

If the Secretary’s design adopts provisions in the Hudson study, it will contain a different approach to the application of new technology. While the number and types of ships in the design are clearly congruent with DMO and EABO, there are other underlying factors that the numbers in and of themselves do not capture. The Hudson study advocates a fundamentally different approach to air and missile defense, for example, substituting closer-in engagements for the long-range layered structure in current doctrine.

Perhaps most fundamentally, the Hudson fleet design is based on what they call “decision-centric warfare” which, based on the DARPA concept of mosaic warfare, seeks to impose insoluble dilemmas and confusion on the enemy. Therefore the new fleet, in a Taiwan invasion scenario for example, would focus on disruption of enemy plans rather than just attrition of enemy forces. This necessarily incorporates a multi-domain approach and seems to mesh well with the emerging joint command and control concept. Whether the decision-centric “theory of victory” will work is an imponderable, but in any case, the projected force composition seems flexible enough to accommodate other approaches if necessary.

I have been a budget skeptic for quite some time and thus far my skepticism has been justified. I am encouraged by Secretary Esper’s assertion that he will augment the Navy’s Shipbuilding and Conversion (SCN) account, but his remaining time in office might be measured in months. In any case, it is a matter of robbing Peter to pay Paul, and “Peter” – other Services and programs that stand to lose money – can be expected to put up a fight. Meanwhile, COVID relief expenditures will prevent any significant increase to the defense budget.

The Hudson plan can theoretically be executed within current SCN guidelines and so I am less skeptical of it. But the Secretary’s plan is more expansive, and while I do like it, I do not think it will be possible to achieve. There are going to have to be difficult internal tradeoffs, most notably reducing the number of nuclear aircraft carriers to bankroll other programs.

There seems to be some kind of “deep state” within the Navy that is wedded to current fleet design. There is not room here to go into all the ins and outs of this matter, but since the late 1990s the Navy has repeatedly rejected calls for a less carrier-centric and more distributed fleet. The LCS is kind of the exception that proves the rule. The need for a smaller, cheaper combatant that could be built in larger numbers became evident in that period, but the Navy acquisition process could not tolerate a truly small, cheap vessel. And so it rushed into production a ship that was designed around too much and perhaps too irrelevant to new technology, and whose cost bloated to several times what was envisioned. Then it rolled the dice again on the Ford-class carrier program and the Zumwalt-class destroyer, both representing ruinously expensive technological overreach. The Optimized Fleet Response Plan, designed to squeeze more readiness out of an insufficient inventory of ships, also has not worked.

Predictably, the Navy’s process produced a fleet structure assessment that was still wedded to these types of approaches, and SECDEF blew the whistle on this. It might be the case that this is simply a one-time interrupt and if a new administration takes office things will snap back to the way they were. Or perhaps OSD will now keep the fleet design process in its hands permanently.

Ideally, in my view, this episode will break up the Navy’s fixation on the aforementioned force structure concepts and approaches, and it will adopt a new approach to fleet design that is freed from the strictures of machine-based campaign analysis based on canonical contingency scenarios. There has been a struggle for the last several decades within the Navy between the strategy shop and resource shop over this, with the resource shop always winning. I hope SECDEF’s intervention will alter that balance of power.

Clearly the Navy does not have enough ships and other resources to support the national grand strategy of comprehensively defending our desired international order. That strategy requires both strategic dispersal and operational concentration. The 2007 CS21 document expressed this succinctly when it called for concentrated credible combat power in the Middle East and Western Pacific, and “globally distributed, mission tailored” forces to conduct presence elsewhere. The problem is that the nation either cannot or will not make the kind of investment necessary to generate a Navy of sufficient size to do this based on the current fleet design. Moreover, trends in weapons and technology make the current concentrated nature of the fleet vulnerable.

Therefore the Navy must shift to a fleet design that is based on both strategic and tactical dispersion. Doing so would permit a more rapid adjustment, since smaller combatants could be built at more yards. Now the question is whether the lumbering acquisition process could also adjust. The problem is likened to the LCS debacle, in which the process proceeded on the basis of “ready, shoot, aim,” which made the Navy wind its way forward to some extent. And so it will want to be more deliberate in the next round of ship design and procurement. But geopolitical events are outpacing us in that respect. The Navy really needs to find a way to increase its combat lethality in the short term, regardless of what overall fleet design is adopted.

Navy shipbuilding plans have almost always been based on a “bow wave” of anticipated future shipbuilding budgets, and I suspect the latest one SECDEF rejected was no different. But even SECDEF himself seems to have caught a mild form of the disease based on his statements that he will increase the shipbuilding budget. But current-year increases are one thing, sustained national commitment to a larger fleet is quite another.

It seems that only looming existential threats can spur such a buildup, and there do not seem to be any of these on the horizon, at least in the public’s view, and notwithstanding the exhortations on great power competition contained in both the current National Security Strategy and National Defense Strategy documents. Moreover, it seems that the cost growth of ships has been outpacing inflation, so even modest increases over time will not be enough. In order to achieve effective strategic dispersal through greater numbers of ships and also increase combat lethality through tactical dispersion, the Navy will have to fundamentally change its attitude toward small, cheap ships that are armed with smart, long-range missiles, and soon.

Robert C. Rubel is a retired Navy captain and professor emeritus of the Naval War College. He served on active duty in the Navy as a light attack/strike fighter aviator. At the Naval War College he served in various positions, including planning and decision-making instructor, joint education adviser, chairman of the Wargaming Department, and dean of the Center for Naval Warfare Studies. He retired in 2014, but on occasion continues to serve as a special adviser to the Chief of Naval Operations. He has published over thirty journal articles and several book chapters.