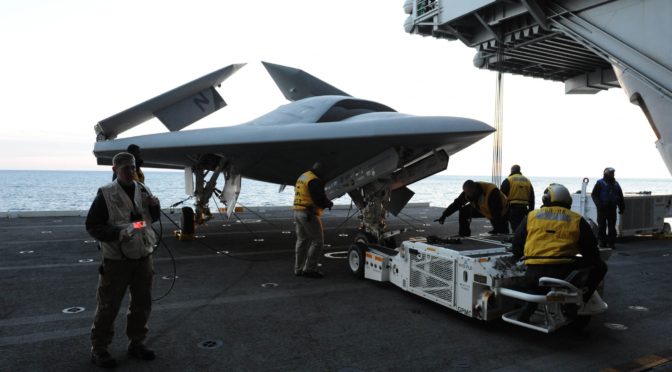 As a part of CIMSEC’s Force Structure Perspectives Series, CIMSEC discussed the Battle Force 2045 fleet design with Capt. Jeff Kline (ret.) who serves as Professor of Practice of Military Operations Research in the Naval Postgraduate School’s Operations Research department, and serves as Director of the Naval Warfare Studies Institute. In this conversation, Capt. Kline discusses advantages realized by fielding a fleet with greater platform variety, how to mitigate risk to emerging fleet networks, and the impacts of the Robotics Age on naval force structure.

I applaud these changes! This vision begins to embrace the offensive advantages of the new Robotics Age of warfare, while retaining more traditional forces to provide defense for sea lines of communications. It is a fleet designed with greater sea denial capabilities yet still retaining the ability to maintain sea control. It is a fleet with more resilience in both operations and logistics, and a fleet better able to operate across the spectrum of competition to conflict. It is very much in line with my CIMSEC commentary of several years ago, the “Impacts of Robots Age on Naval Force Structure Planning.”

This is not necessarily a “high-low” mix fleet design, but rather a lethal, focused-mission sea denial force intended for forward operations while also being a sea control force of multi-mission platforms to protect our ability to use the oceans for sustainment and logistics. It is a fleet design better suited for conflict, and therefore, may better deter conflict.

This new force structure may be used to execute Navy and Marine Corps warfighting concepts, including Distributed Maritime Operations (DMO), and Expeditionary Advanced Base Operations (EABO). These concepts and the new fleet design embody leadership’s thinking on the nature of future warfighing tactics and operations. Are these warfighting concepts mature or flexible enough to provide a long-term foundation for building this redesigned fleet? Are trends in tactics and technology adequately captured?

I believe this new fleet design moves toward an architecture more capable of effectively executing both DMO and EABO, while providing the connections for their synchronous employment. Foundationally, if DMO’s objective is to present an adversary with multiple points of risk, it is easier to do that with 500 platforms than 300. Likewise, if EABO is to place distributed offensive capability forward, then greater logistical capacity will be required to support it. Integrating these concepts will also be enabled by envisioning coordinated operations between the Navy’s forward offensive sea denial platforms—the submarines, unmanned systems, and smaller surface combatants—and the Marine’s shore-based ISR and anti-ship missile capabilities.

Having a better mix of single and multi-mission ships may also catalyze an increase in integrated operations with allies—a necessary condition for both DMO and EABO. Barriers to capability sharing in our advanced defensive systems are not necessarily the same with smaller combatants and unmanned platforms dedicated to regional ISR and offensive operations. And, for basic maritime security missions, smaller combatants are well-suited to work alongside allied partners. Adding a larger proportion of these vessel types to the fleet will provide additional options for engaging regional partners.

As the new fleet design is incrementally introduced, and the advantages and limitations of new technologies are better understood, tactics can be modified along with concepts to effectively employ them. The greatest risk, of course, is to the networks and communications that tie this fleet together. In a way, this transforms the Navy’s “capital ship” from the aircraft carrier to the fleet network, a natural outcome of distributed operations enabled by the Robotics Age.

Two approaches to mitigate risk to the fleet network must be developed independently: adding robustness to our communication capabilities and maturing tactical mission command to a level that our force is network enabled and not network dependent. Essentially, developing concepts and tactics to allow our force to operate without fleet C2 if necessary. This may be a combination of older concepts by creating geographic operating areas and/or “kill boxes” where local tactical commanders have full control over a detect-to-engage sequence, and new communication techniques like burst mesh networking with robotic nodes. This will not work, however, unless local commanders have local control of ISR, engagement, and battle damage assessment assets in their assigned area. These ideas are covered in more detail in my 2016 CIMSEC article “A Tactical Doctrine for Distributed Lethality” and SECDEF’s fleet design moves toward providing the quantities of unmanned systems to make this happen.

Sustainability is the greatest risk to this new fleet plan. Increasing the manpower, maintenance, and logistics requirements to support a more numerous fleet will require a tradeoff of some operational capacity toward sustainability. But even here there are ways to mitigate a traditional sustainment requirement. Exploring concepts involving less expensive, attritable unmanned sensor platforms, shorter platform lives where replacement vice retrofit is the goal, and low maintenance systems are more possible with a greater number of single-mission platforms than expensive multi-mission ones.

A possible manning tradeoff consideration is using lightly crewed or optionally-crewed systems to replace just one aircraft carrier and air wing at the battle’s edge. This may free personnel to fill control, maintenance, and sustainment roles. This is a conceptual leap deserving further analyses, but it reflects possibilities facilitated by leveraging intelligent automated systems and introducing entire platforms which use them. And, this fleet design conservatively retains a large portion of our aircraft carrier fleet to hedge against technological risk.

Historically, large capital-intensive navies are by nature difficult to change. Non Navy-specific, large-segmented bureaucracies, particularly those following established processes like the PPBE and acquisition systems, inspire marginal change at best. There is some goodness to this, as great change in a fleet can incur significant geopolitical and strategic risk, but in our current world-power situation, change is needed in our force structures to meet emerging technological threats. I believe this is well-recognized throughout Navy leadership.

The Secretary of Defense used his offices to overcome some of these barriers. What will be critical now is the next step: execution. I believe Congress, OSD, and Navy leadership will have to be directly involved to ensure this fleet design is realized. We don’t lack for fleet assessments recommending change, we lack for the actual change.

I believe it sends a strong signal to our potential adversaries that we are building a fleet less vulnerable and more resilient in a possible future conflict across multiple domains. It means we are willing to take some technological risk to stay competitive in the Robotics Age of warfare, and be capable of holding their strategic interests at risk. This may have a strong deterrent effect on aggressive adventurism by providing additional response options with varying levels and types of force.

I don’t believe the assessment itself will motivate the necessary choices to realize this fleet design vision. SECDEF, SECNAV, and the CNO must create the organizational changes to institutionalize the transformation. That may require some radical shifting of resources, responsibilities, and authorities, and of course, Congressional support. The next step is really a campaign to address a full strategy—ends, ways and means. The new fleet design provides an endstate and it provides some force structure offsets to identify means. Now, what is required is a transformation execution plan which clearly articulates ways by identifying authorities and resources.

I am optimistic this change is achievable. The recently released House Armed Services Committee Future of Defense Task Force Report 2020 recognizes the advantages emerging technologies like artificial intelligence, quantum computing, and biotechnology can provide us, as well as the threat they pose in an adversary’s arsenal. It calls for changes to the DoD programming and acquisition processes as well as partnerships with industry to meet the vision of a transformed force. It is very much in the spirit of SECDEF’s naval force design. For Navy leadership pursuing this vision, I believe they will find an ally in Congress.

Also, great changes in fleet capabilities are normally associated with a strong visionary and leader who had the longevity to realize the introduction. A flag officer should be appointed with the authority and tenure in office to transform the fleet to embrace new information, manufacturing, cyber, and computational technologies. Naval gunnery was advanced by Dahlgren, the nuclear navy realized by Rickover, submerged ballistic missiles brought on by Burke, Navy computation reared by Hopper, and Aegis was shepherded by Meyer.

Recently, the Chief of Naval Operations launched Project Overmatch, where “Beyond recapitalizing our undersea nuclear deterrent, there is no higher developmental priority in the U.S. Navy,” and whose goal “is to enable a Navy that swarms the sea, delivering synchronized lethal and non-lethal effects from near-and-far, every axis, and every domain.” Can Admirals Small and Kilby, who are charged with leading this project, be those who bring the U.S. Navy into the Robotics Age?