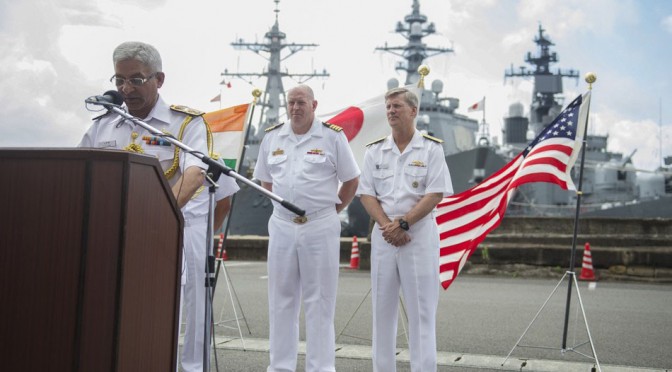 Welcome to part one of the February 2016 members’ roundup. Over the past month CIMSEC members have examined several international maritime security issues, including recent Indian Navy maritime policy developments, aspects of the U.S. Navy’s defense procurement program, components of a notional South China Sea naval conflict between China and the U.S. and capability challenges for the U.S. Navy Littoral Combat Ship (LCS).

Beginning the roundup at Offiziere, Darshana Baruah discusses India’s Cold War non-aligned strategy and the implications this strategy has had on India’s maritime security policy in the post-Cold War period. Ms. Baruah explains that India must realize that non-alignment does not equate to non-engagement and that committing to a policy of engagement is critical to manage the complexities of the developing Asian maritime security environment. She references the bilateral MALABAR naval exercises between the U.S. and India as well as the Maritime Security Strategy document released by the Indian government as developments hinting to a changing Indian maritime policy.

Ankit Panda, at The Diplomat, also discusses India’s maritime strategy with an analysis on potential joint patrol operations in the South China Sea between Indian and U.S. navies. Mr. Panda highlights that there is no indication whether these jointly conducted patrols would reflect recent U.S. FONOPs or less contentious passing patrols, however, he notes that the potential for these patrols to occur reflects a shift in India’s maritime doctrine to ‘act East’. Also at The Diplomat, Mr. Panda explains the conditions and challenges of completing a Boeing-India F/A-18 Super Hornet deal where the Indian Defense Forces would receive an advanced multi-role fighter to supplement its next-generation indigenously built Vikrant-class aircraft carrier and raise the potential for increased technology sharing between the U.S. and India.

Bryan McGrath, at War on the Rocks, discusses the concept of distributed lethality and recent weapons tests and developments that have brought this concept to maturity for the U.S. Navy’s surface force. Mr. McGrath explains how the successful launch of a Tomahawk Land Attack Missile (TLAM) from a U.S. Navy destroyer has now increased the anti-surface warfare combat range of about 90 U.S. cruisers and destroyers currently operating with the Vertical Launch System (VLS) to 1000 miles. Mr. McGrath also identifies the additional capability introduced to the long-range supersonic SM-6 missile, now capable of engaging enemy surface combatants, as a critical development for distributed lethality implementation across the fleet.

Kyle Mizokami, for Popular Mechanics, discusses the planned purchase of 14 F/A-18 Super Hornets as a result of the fighter shortfall in carrier air-wings caused by delays in the Joint Strike Fighter Program. He explains that the delays will also reflect the slow introduction the F-35C will have entering into service within the Navy with only four planes to be purchased in 2017. Mr. Mizokami also outlines surface combatant purchases included in the Navy’s FY2017 budget, highlighting the procuring of two Virginia-class attack submarines and two Arleigh Burke-class guided missile destroyers – the destroyers to be equipped with the new Air and Missile Defense Radars that boost the ship’s ballistic missile defense capabilities. Also at Popular Mechanics, Mr. Mizokami provides an analysis on the U.S. Navy’s LCS live fire exercise against an enemy fast-attack swarm that demonstrated potentially serious flaws in the ships design, revealed by combatants entering the ‘keep-out’ range of the ship and technical issues arising throughout the test – albeit the exercise only tested certain weapon and fire control systems.

To conclude the roundup in the Asia-Pacific, Harry Kazianis for The National Interest provides an outline of potential tactics China’s PLA would emphasize during a notional conflict with the U.S. Navy. Mr. Kazianis explains that over the past two decades China has feared the U.S. ability to rapidly deploy naval assets throughout multiple domains in China’s areas of interests largely due to limited PLA capabilities. Mr. Kazianis identifies the employment of large volumes of rudimentary sea-mines and missiles as a simple mechanism for overwhelming U.S. Navy defenses and a feasible strategy to achieve an asymmetric edge over U.S. fleets in theatre.

Members at CIMSEC were also active elsewhere during the first part of February: