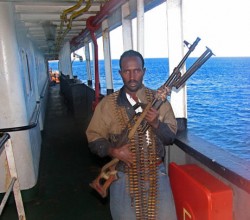 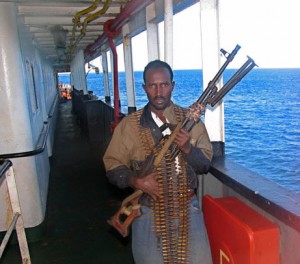 Chances are that, for all except the most wonky observers and those stationed at Camp Lemonnier in Djibouti, the issue of African naval affairs only came into popular consciousness alongside media-saturating images of Somali pirates menacing international freighters with rocket-propelled grenade launches from their little fishing dhows. To anyone who’s spent time in any Somali regions, there’s more than a little irony in this renewed interest, as up until the conception of Somali naval responses and responsibilities to the dangers in their sovereign waters conjured one into existence, the Horn of Africa proper had no navy to speak of.

The lack of naval forces in the Somali regions pre-piracy could easily be explained away by the anarchy into which Somalia descended in the late 1980s. But it’s actually more complicated than all that, since even after independence, while Djibouti and Ethiopia-then-Eritrea developed formidable naval forces to police the waters of the Red Sea, despite the size of its population and its massive coastline, post-colonial Somalia at its height boasted a navy of only about 20 ships, almost entirely small Soviet vessels put on patrol duties to police the waters against illegal fishing.

And even in the aftermath of the Civil War of the late ‘80s and early ‘90s, despite the development of regional pockets of stability like Somaliland and Puntland, new navies, even patrols in dinghies, did not develop. That’d be less surprising if securing borders, establishing monopolies of violence, and creating formidable land forces to insulate the regions from the ravages befalling the rest of Somalia hadn’t been central to the rhetoric of Somaliland and Puntland for fifteen and ten years (respectively) before the advent of mass piracy.

It’d actually be fair to say (and here’s the meat of the irony) that the lack of a navy was directly complicit in the emergence of the piracy that’s refocused the world and local de facto governments onto naval affairs as an anti-piracy remedy. The absence of even a tiny naval presence on the Horn removed the last barrier to now-well-documented illegal fishing and waste dumping in coastal waters. In conversations with locals in coastal towns and with some individuals who seem to have credible ties to piracy themselves, it’s become clear that one of the major draws into piracy for many is the justification of a national vigilantism, in which despairing fishermen are told that they have the opportunity to harass foreign powers violating their sovereign waters, drive out the individuals who are degrading the viability of the traditional livelihoods, and make a fat stack of cash in the process. Those associated with piracy say that even when this self-justification quickly loses its validity as civilian and merchant ships are targeted, the economic needs of shattered communities and sense of hopelessness and insecurity along the coast drives people to continue their activities.

It’s hard to imagine that the development of Somali navies (the plural will be explained momentarily) will lessen this sense of insecurity, as the timing of their emergence and their provenance can send a conflicting message on the priorities of the state. Although the navy is popular with the clans in power in port cities like Bosaso and Berbera, the fact that maritime troops developed only in response to the demands and through the financial initiative of foreign powers can give off the sense that the navy exists primarily as a service provided for and to limited segments of society, and not necessarily to the bulk of the populations that rely on the sea for a livelihood. Reports that Somali navies encountering illegal fishers from Yemen have released the offenders so as not to damage relations between the two countries are feeding this image of a “national” army more focused on international pressures than on duties to all residents of the Somali state(s).

That holds true throughout “Somalia” despite the fact that multiple navies have developed piecemeal across the various de facto independent entities that make up Somalia on the map. The first force formed in 2009 in Somaliland, based in the port of Berbera and stocked with speed boats and radios by the British. This force consists of 600 men split across 12 bases (usually little more than a tent on the coast near a village) patrolling 530 miles of coastline and operating on (at most) $200,000 per year. Soon after, the government of Puntland started a partnership with the Saracen International and later received funding from the United Arab Emirates to train a 500-man force patrolling an even greater 1,000 miles of coastline. Mogadishu has made forays into the development of a navy as well, but the status of any such projects is opaque, as Puntland (which considers itself an autonomous federal state of the Somali government based in Baidoa/Mogadishu) is often lumped into considerations of military developments in Somalia as a whole.

While it would be fair to say that there is some difference between the Somaliland and Puntland forces, with Puntland engaging in more raids on what Somalis describe as “pirate bases” and Somaliland leading more constant patrols to deter activities within range of the ports and shipping lanes, it is fair to say that all Somali naval forces derive their deterrent capabilities and effectiveness at capturing pirates on a budget primarily from local intelligence gather. Behind every reported attack on a pirate base or capture of a pirate boat (although it is always highly questionable whether the “pirates” captured were actually just quasi-legal or illegal fishermen) is a tip-off from a local, making use of the exceptional telecoms coverage and penetration and low call rates in Somalia, notifying officials of strange boats plying the town’s waters.

More ships, more money, more men is the current cry and hue from officials in Somaliland and Puntland. But the lessons of the Somali navies thus far have been that the effectiveness of Somali naval forces derives not from manpower and equipment (as creating a sufficient naval force to cover Somalia’s massive coastline is impractical for the nation at present) but from intelligence gathering and the cascading effects of the economic benefits of re-securing of sovereign waters and subsequent decline in the justifications for and incentives to join in piracy. Thus the future of naval affairs in Somalia practically lies primarily in the development of local outreach along the coast, systematic and reliable reporting mechanisms, the disruption of lines of communication between those who plan and commission pirate strikes and those individuals on the coast who carry them out, and the investment of national resources in redeveloping fisheries and port resources in coastal towns. Perhaps that solution’s none to exciting to the officers in the Somali navies or to the wonks watching them, but it’s an efficient solution for a region with limited resources and an almost limitless coast—which may explain why it bares such a potential similarity to the barebones but sufficient naval forces and strategy of the post-colonial, pre-collapse Somali navy.”

Mark E. Hay is a sometimes-freelance writer, sometimes-blogger, and sometimes-graduate student at the University of Oxford. Academically, he focuses upon the history and theory of Islam in the Indian Ocean world. Outside of the academy, he writes more broadly about anything under the big tent of culture, faith, identity politics, and sexuality—basically anything human beings will fight over.

2 thoughts on “East Africa: A Historical Lack of Navies”