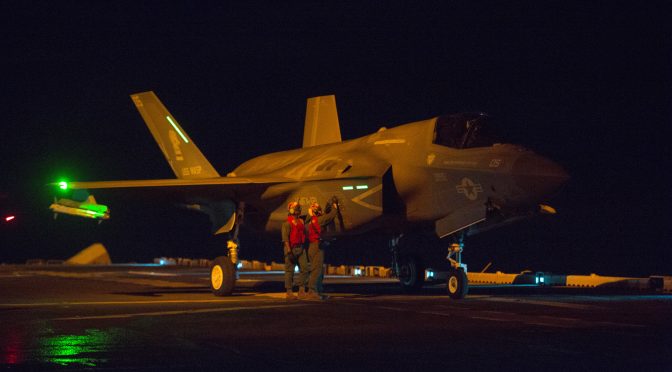 Suppression of enemy air defenses (SEAD)1 is a mission based on recognizing that air defenses have become increasingly lethal, effective, and must be suppressed in order to allow air operations to be conducted with dramatically reduced loss rates. SEAD has evolved since WWII as a direct result of lessons learned in combat. It has established doctrine, established tactics, specialized force structure, specialized weapons, and trained and experienced personnel that plan and execute the mission. The U.S. Navy now faces a similar situation as the result of the dramatic increase in the numbers and sophistication of anti-ship cruise missiles (ASCMs). The situation is summarized in the 2017 Center for Strategic and Budgetary Assessments (CSBA) fleet architecture study as follows:

“To support deterrence by denial or punishment, American naval forces will need to operate and fight in proximity to the adversary. As described above, U.S. surface forces will face large numbers of enemy anti-ship missiles in these areas and thus require high-capacity air defenses to survive long enough to conduct their offensive missions. Active defenses may, however, be insufficient to win the ‘salvo competition’ between the enemy’s weapons systems and U.S. defenses. To reduce enemy salvos to more manageable levels, U.S. naval forces will also need to deny or degrade the enemy’s ability to find and target ships.”2

The nation that has the offensive capability to suppress an enemy’s intelligence, surveillance, and reconnaissance (ISR) through physical destruction, deception, disruption, and corruption will have the critical edge  – that of superior situational awareness, a significantly reduced threat of attack, and the all-important capability to target and attack enemy ships. While one ASCM hit will severely damage or disable most surface ships, anti-ship missiles are a threat only when an enemy ship has been detected, classified and identified, located and tracked, and targeted (e.g. allocated to a land site or an air, surface or subsurface launch platform). This extended kill chain is dominated by information from ISR systems which can be destroyed or disrupted.

To prevail in the salvo competition, the U.S. needs a robust offensive capability for Suppression of Enemy Intelligence, Surveillance, and Reconnaissance (SEISR). Like SEAD, this offensive capability has a preplanned and reactive component. The preplanned component achieves the greatest suppressive effect, but it has to be followed by a reactive component focused on suppression of any remaining or reconstituted ISR capacity. This component can be planned in great detail based on comprehensive intelligence analysis of the adversary’s land, air, space, undersea, and maritime surface ISR capabilities. This includes their associated communications, command and control, and intelligence analytical infrastructures. The reactive component requires current intelligence focused on enemy remaining or reconstituted ISR capabilities in order to plan and execute reactive SEISR operations. The complexity of a near-peer nation’s ISR capabilities suggest that SEISR will require a complex joint service response supported by multiple agencies to achieve the objective of reducing the ASCM threat to levels that are manageable for fleet defenses.

Building on the intelligence foundation, the mission will require an additional level of analysis to identify and assess the wide variety of possible kinetic and non-kinetic options for suppressing the wide range of enemy ISR capabilities. This analysis of suppressive options includes not only the effects of operational capabilities, but also, the identification of opportunities and the definition of requirements for new capabilities. The intelligence and effects analytical capabilities required to support the pre-planned and reactive SEISR missions will require the establishment of dedicated analytical cells that have the depth of knowledge of all aspects of enemy ISR systems and of available kinetic and non- kinetic alternatives for achieving the desired suppressive effects.

Suppression has to include a reactive component focused on suppression of enemy efforts to reconstitute or field new capabilities as the conflict evolves. Like SEAD, after the preplanned options are executed, SEISR will have a strong tactical component that drives a new near real-time intelligence and effects analytical focus, and SEISR capabilities that can be applied without delay when opportunities are presented by the enemy. SEISR will have to be animated by a forward-leaning, tactical mindset to keep up with or anticipate changing enemy ISR capabilities and methods throughout the conflict.

If effective, SEISR will reduce the ASCM threat to levels manageable by fleet non-kinetic and kinetic defenses. The non-kinetic component, often referred to as Counter ISR, will be focused on countering enemy ISR platforms and sensors, and countering launch vehicle and ASCM target acquisition systems. These non-kinetic methods range from tactics such as emissions control (EMCON) to deny detection, deception to confuse, and electronic attack against RF systems. Success is heavily dependent on having technical intelligence on enemy ASCM systems; and, the land, air, surface and subsurface ASCM launch complexes or platforms, and their surveillance, reconnaissance, and target acquisition systems, associated communications, and data links.

The key to tactical success in the defense against ASCM attack is directly dependent on the battlegroup tactical commander and his or her subordinate warfare commanders having the situational awareness that enables them to make better tactical decisions faster than the enemy. This situational awareness will be the result of the automated integration of information that is relevant to the specific commander with respect to geography, content, and timeliness.

SEAD has evolved over the past 70 years. The DoD and Navy do not have 70 years to organize and prepare for conflict against a nation with near-peer ISR and target acquisition capabilities. The SEISR mission will require an institutional focus, the rapid evolution of concepts and tactics, focused intelligence and target study support, and the development of personnel with a tailored commitment to the Counter-ISR missions.