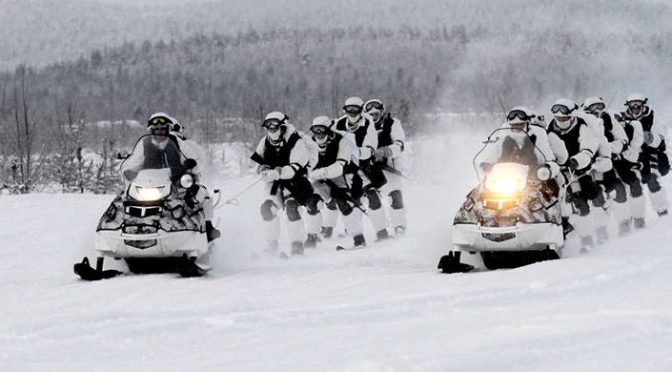 In a speech to the Arctic Council during the 11th Ministerial Meeting in Rovaniemi, Finland, U.S. Secretary of State Mike Pompeo railed against a critical security problem for the United States in the Arctic region: Russian Militarization.1 Pompeo argued “No one denies Russia has significant Arctic interests…But Russia is unique. Its actions deserve special attention, special attention of this Council, in part because of their sheer scale. But also because we know Russian territorial ambitions can turn violent.”

As the Arctic has warmed, the once ice-locked Russian northern coast has become an emerging strategic zone of littorals and chokepoints for global trade, with the potential to shorten the transit time from Rotterdam to Shanghai by thousands of nautical miles. It is already in use.2 As the ice has warmed and regional interest has grown from powerful states like China, Russian forces have expanded their regional presence to reinforce territorial claims and assist vessels transiting the emerging Northeast Passage as part of the general modernization of Russian military forces.3 Despite these objectives, Russian Arctic militarization holds the potential to kick off a regional arms race. The reopening of Soviet-era Arctic installations and the construction of Arctic patrol vessels does correspond to the overall reinvigoration of the Russian Military; however, a comparison to equivalent American arctic capabilities evokes the kind of fears highlighted by Pompeo in his address. The most severe technological indication of American military under-preparedness remains the “icebreaker gap” of ice-capable and icebreaker vessels, with two American ice-capable vessels arrayed against Russia’s expanding fleet of more than 40 ships. For comparison China maintains two such vessels.4

The situation is not wholly grim when considering the growing interest of the American military toward the emerging Arctic security environment, with the U.S. Marine Corps having participated in a joint-training operation with Norway and the U.S. Navy sending a patrol into the Barents Sea after years of absence.5 However there are varied challenges for the United States’ ability to effectively address the region, including domestic financial concerns which killed the last push for a new icebreaker, balancing the internal politics of NATO regarding the Arctic, and policy stagnation at the highest levels of government with respect to the Arctic.6 Each of these factors leaves American policymakers in a lurch regarding the region which makes funding new Arctic capabilities problematic.7 With increasing Russian capabilities, growing global interest from states like China, and American security risks all increasing as the sea ice of the region melts away, the question remains of how the United States could best address the rising militarization of the Arctic.

The most effective direction for American policy in the region should be the signaling of a strong commitment by emphasizing the preparedness of existing U.S. expeditionary forces for Arctic operations, rather than the development of uniquely Arctic security capabilities. The focus on increasing the preparedness of existing forces rather than developing Arctic-specific forces or structures enables a more ready tackling of existing inhibitors to American Arctic security policy development, and it does so in three critical ways. First, it prevents the abandonment of cooperative regional pursuits. Next, it enables an adaptive response to shifting regional dynamics. Third, it prioritizes existing security arrangements without straining alliances.

The Arctic represents one of the few regions of the world where strategic adversaries will routinely cooperate and support the exact same scientific projects. This cooperative arrangement has been beneficial for all parties within the Arctic Council, the principle institutional mechanism for research cooperation on Arctic issues.8 Though the number of American allies and friends outweighs adversaries on the Council, the three legally binding agreements for the region have come from joint negotiations between the United States and Russia.9 American policy on the Council has been that of a patron alongside Russia in order to formulate policy and support research endeavors, with the critical aspect of the Council being that of the exclusion of security and territorial discussions.10 If the United States makes overtures to increase Arctic-specific military preparedness to balance against Russian capabilities, such as new ice-capable patrol vessels or icebreakers, the successes of the Arctic Council could be put into jeopardy as the Council has expressly avoided discussions of territorial disputes and security.11

Instead of developing Arctic-specific capabilities the U.S. military should instead pursue the readying of existing military forces for Arctic operations through training missions and the development of doctrine for Arctic operations, as these shifts will have the benefit of being able to tamp down considerations of a full-on Arctic arms race. Developing military capability solely for Arctic use could upset one of the few areas of positive interaction left for the U.S. relationship with Russia given the continual tension in other regions like Eastern Europe and the abandonment of other cooperative frameworks such as nuclear arms control.12 Moreover, given the American reliance on the Arctic Council to develop new policies for myriad agencies other than the American military, the preservation of funding for Arctic research and access to data from the Russian Arctic is critical to maintain American Arctic policy trajectories given the stagnation in Arctic policy since 2013.13 It becomes critical for the future of American policy development in the region as a whole to preserve the balance within the Arctic Council and not exacerbate the rising security challenges stemming from Russian militarization.

The Arctic’s marine environment is one defined by sea ice, and this highlights the second reason why the United States should be signaling regional commitment through an emphasis on regional preparedness and training rather than the more hardline approach of developing unique equipment for regional operations. Russian preparedness for Arctic operations is by far the most developed of all Arctic littoral states for white-water surface naval operations, despite the aged nature of the fleet and the superiority of American forces in traditional blue-water environments.14 The American focus on surface vessels for the Arctic region have largely downplayed or ignored the enormity of the financial burden to construct, crew, and berth an American white-water fleet. The cost of operations within the region for surface vessels is simply too much to bear for the U.S. government as other regions continually take greater priority.15 Instead, the U.S. Navy should rely on existing vessels with more extensive Arctic operations experience to project American security and signaling to the region: the submarine fleet. Extensive institutional experience from ballistic missile submarines and scientific research expeditions enables the American submarine fleet to be the primary agent for American Arctic security signaling.16

The Barents Sea represents the area most likely to become a flashpoint between the United States and Russia due to the presence of significant fisheries, oil resources, and the uneasy security situation between Norway and Russia.17 The Barents Sea is warming especially quickly and its proximity to the primary berths of the Russian Northern Fleet makes it a prominent area of potential conflict, significantly reducing the need for the pursuit of ice-capable vessels for the U.S. Navy.18 Posturing in northern Scandinavia with a defensive orientation utilizing traditional land, air, and sea forces will help contest the entrance of the Barents into the Norwegian Sea.19

These chokepoints are critical beyond military action as well, especially for maintaining mariner safety within them as the Arctic warms.20 Some of the most critical negotiations involving military activities regarding the Arctic have been related to coordination for search and rescue operations critical for expanded fishing and commercial routes. Given the chokepoints of the region are contested on either end of the Northern Sea route, the development of a white water navy would inhibit communal policy goals of regional economic development through arms racing rather than protect them. For instance, with half of the Bering Strait American and half Russian, a healthy relationship between the two coast guards is critical for the security of all mariners transiting the strait in order to have it become economically viable as safety considerations dominate the minds of merchant vessels entering this hazardous region.21

NATO has and will continue to be one of the most important partners for the United States, and though the organization appears monolithic it is not without challenges. The internal politics of NATO states informs their decision-making in critical respects regarding the Arctic, and especially regarding Russia in the Arctic. The most visible of such considerations involves Canada, which due to a confluence of issues related to Russian and American relations has been less than thrilled of the prospects of the United States spearheading NATO presence in the Arctic because of the possibility of eroding Canadian sovereignty regarding the Northwest Passage by the U.S. and other states.22 The status of the passage has been a contentious domestic political issue for every Canadian administration since the late 1990s. If the United States begins developing new ice-capable military patrol vessels or insists on forming a NATO maritime group, it could be seen as eroding Canadian regional sovereignty and cause a disagreement to flair between Ottawa and Washington.23 Given the Russian method of attempting to play Western allies off one another, such a disagreement would add fuel to Moscow’s efforts and further endanger coordination.24

A more moderate approach of pursuing national security objectives would be through bilateral and multilateral training and coordination with Arctic partner states like Canada and Norway.25 Emphasizing regional partnerships by increasing visible proposals of joint training operations and American force readiness for potential deployment would be useful in signaling commitment to defending American interests in the emerging strategic chokepoint without stepping on the toes of strategic partners. The aforementioned speech by Secretary of State Pompeo came just months after such training operations occurred bilaterally with the U.S. Marine Corps and Norwegian military in February 2019, and a year before scheduled regional NATO exercises proposed by Norway.26 Leaning on the proposals of NATO members like Norway on critical issues like Arctic preparedness removes the risk of the United States irritating critical regional actors while removing a degree of culpability for escalating the militarization of the region. Instead, visibly preparing for Arctic operations through training initiatives pursued bilaterally with Arctic states and multilaterally through NATO emphasizes a whole-of-region response to regional security issues while sharing associated costs.

The Arctic is changing physically and the security dimensions of the region are changing along with it. The region will not be ice-free overnight, and the United States is not without partners in addressing those changing strategic considerations. It behooves the United States to not pursue a hardline balancing arrangement against Russian militarization and instead pursue what it has been doing for some time, preparing for the potential of Arctic operations across all service branches. The pursuit of this policy perspective will signal American commitments to regional security without exacerbating the militarization of the Arctic into a full blown arms race, enabling an emerging littoral to be sufficiently addressed without intensifying competition within one of the most peaceful and cooperative regions of the world.