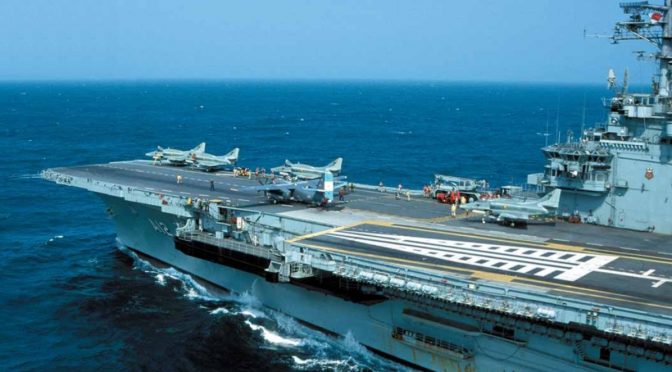 On 14 February, the Brazilian Navy announced that it will suspend the modernization of carrier NAe Sao Paulo (A12) and commence its demobilization and subsequent decommissioning. Oddly, the news is simultaneously surprising and unsurprising at the same time. The Brazilian Navy regarded the extension of the carrier’s operational life as one of its priorities, however, ongoing technical difficulties and rising costs have made it more feasible to get rid of it than to extend its service life. As Brazil is the only Latin American country that possesses an aircraft carrier, its decommissioning must be properly discussed in terms of regional geopolitics.

Brazil has possessed two carriers: the first one was NAe Minas Gerais (A11), a Colossus-class vessel that served in the Brazilian Navy from 1960 to 2001. The vessel, formerly known as HMS Vengeance (R71), was constructed by the United Kingdom during World War II and sold to the South American nation in 1956.

Minas Gerais was replaced by Sao Paulo, a Clemencau-type French carrier formerly known as Foch (F99). The vessel was constructed in the late 1950s and Brazil purchased it in 2000 in a deal reportedly worth USD 12 million; it arrived in the country in 2001. Sao Paulo reportedly displaces 32,800 thousand tons, is 265 meters in length, and its air wing is constituted of A-4 Skyhawk aircraft. Sao Paulo was an important component in the training of Brazil’s naval pilots, and it also participated in exercises with countries like Argentina. However, it also spent time docked undergoing repairs and upgrades.

The French shipyard Direction dês Constructions Navales et Services (DCNS) announced in December 2013 that it had “performed a ship check on the forward catapult” of Sao Paulo. On November 2015, IHS Jane’s reported that cracks had been found in the hull of the carrier, but the Brazilian Navy denied the report. Unfortunately, there were also deadly accidents aboard the platform: a May 2004 fire in the engine room killed three crew members. A second fire on February 2012 killed sailor Carlos Alexandre dos Santos Oliveira.

The Navy’s decision to demobilize the platform is a slight surprise to the author of this commentary, who just this past September quoted the Brazilian Navy’s commander saying otherwise. At the time, the author asked Admiral Eduardo Leal Ferreira, commander of the Brazilian Navy, a question about Sao Paulo’s future at an on-the-record event at the National Bureau of Asian Research on 26 September, 2016. The Admiral explained that “we are working with DCNS to find a technical solution to have its propulsion system renewed.” Moreover, the Admiral listed the carrier as the third of the navy’s priorities, after the submarine program (PROSUB) and the construction of the Tamandare-class corvettes. What a difference a few months can make.

The Brazilian Navy’s communiqué explains the reasoning behind the decision to demobilize the carrier: upgrading it signifies “a high financial investment, there are technical issues and [the process will] require an extended period [of time].” The modernization process apparently could have taken a decade, by which time the AF-1 group would have to be retired, making it necessary to buy a new air wing suitable for the old ship. In an e-mail interview with this author, Professor Mauricio Santoro, a political scientist and assistant professor at the department of international relations of the State University of Rio de Janeiro, adds that “the explanation for this decision is the deep financial crisis that the Brazilian government is facing, with austerity measures being implemented as well as the expense cuts in many public policies.” In other words, given the scarce use of Sao Paulo and the expensive requirements needed to extend its operational life into the late 2030s, it is not surprising that the platform is being scrapped.  According to the Navy, the process will require three years.

With that said, the Brazilian Navy is already looking past Sao Paulo and maintains the aim of having a carrier in its fleet. The aforementioned 14 February communiqué explains that a new carrier remains the Navy’s third priority after PROSUB and the corvettes as “obtaining a new carrier will be substantially cheaper than modernizing Sao Paulo.”

This statement raises questions like: will Brasilia once again acquired a used platform, or will it embark on the more ambitious, but probably more costly, goal of manufacturing a new one? In recent years there have been occasional reports that DCNS has offered its PA2/CVF carrier project to Brazil to eventually replace Sao Paulo. We will have to wait and see how the Navy’s medium- and long-term plans are affected by recent developments. It is likely that Sao Paulo will be replaced eventually since, as Professor Santoro explains, “the importance of a carrier to Brazil has been highlighted in every major policy document of the Armed Forces, such as the National Defence Strategy.”

A Carrier-less Brazil and Latin America?

In previous CIMSEC analyses (e.g. How Peaceful is the South Atlantic?) the author discussed the generally calm South Atlantic geopolitics, which can be expanded to calm Latin American and Caribbean in general. There certainly are still some maritime border disputes and occasional incidents, but the region has been free of inter-state warfare for decades (the last regional war with a maritime theater of operations was the 1982 Falklands/Malvinas War). Moreover, Brazil enjoys cordial relations with its neighbors, hence the Brazilian Navy probably does not require a carrier to protect its exclusive economic zone (EEZ).

Nevertheless, the Brazilian Navy and several scholars and experts do believe in the necessity of having an aircraft carrier. “Brazil has thousands of miles of coastline, major offshore oil reserves, and more of 90 percent of its foreign trade comes from the sea, hence a carrier is an important tool for naval and foreign policy, as it serves both as a deterrent and helps naval forces in the open sea, among other activities,” Professor Santoro notes.  Additionally, a carrier would help Brazil’s power projection, demonstrating to the world that it has a blue water navy.

The Sao Paulo’s usefulness would likely be different if it had proved to be a global asset. For example, Sao Paulo could have been deployed to peacekeeping missions that Brazil participates in, such as the UN mission in Lebanon (UNIFIL) or the UN mission in Haiti (MINUSTAH). The platform would have been a welcomed addition to the multinational humanitarian operations in Haiti after the 2010 earthquake and the aftermath of Hurricane Matthew in 2016.

As previously mentioned, Brazil is the only Latin American that has a carrier nowadays. The only other regional country to possess one was neighboring Argentina: the ARA Independencia (V1) and then the ARA 25 de Mayo (V2), a Colossus-class carrier decommissioned in 1997. In fact, other Latin American navies are turning to smaller platforms, particularly oceanic patrol vessels (OPVs) given their maritime security challenges.

Should Brazil eventually acquire a new carrier, this will hardly affect regional geopolitics. Brasilia enjoys cordial relations with its immediate neighbors and the Western Hemisphere in general. This is best exemplified by the fact that the PROSUB project, which includes constructing a nuclear-powered submarine, has not triggered a regional arms race to deter an “imperialist” Brazil.

By the end of the decade, carrier Sao Paulo’s time in the Brazilian Navy will come to an end, leaving behind a lackluster record. The vessel spent too much time in port undergoing repairs, and when it was out at sea, it was for standard training missions, never participating in a defining operation that validated its acquisition. Moreover, Brazil likely does not need a carrier to protect its EEZ from neighboring nations, Latin American geopolitics being what they are, as compared to a large fleet of OPVs (the Tamandare corvettes will probably fulfill this role). Nevertheless, Brazilian experts, as well as the Navy, do regard the carrier as an important component of their maritime defense system as well as a critical platform to project Brazilian naval power.

Should Brazil eventually obtain a new carrier, this hypothetical platform should participate in multinational naval operations, such as Operation Atalanta in the Horn of Africa to combat piracy. The carrier could be utilized as a launching pad and an at-sea command center for humanitarian missions akin to the Operation Unified Assistance, in which the Carrier Strike Group Nine, led by U.S. carrier Abraham Lincoln, helped Asia Pacific nations after the 2004 Indian Ocean Tsunami. In other words, if the Brazilian Navy continues to regard a new carrier as a priority, while arguably unnecessary for traditional defense purposes, such a platform can be utilized for various helpful initiatives around the globe.

W. Alejandro Sanchez is a researcher who focuses on geopolitical, military and cyber security issues in the Western Hemisphere. Follow him on Twitter: @W_Alex_Sanchez

3 thoughts on “The Demobilization of Latin America’s Only Carrier: Brazil’s NAe Sao Paulo”