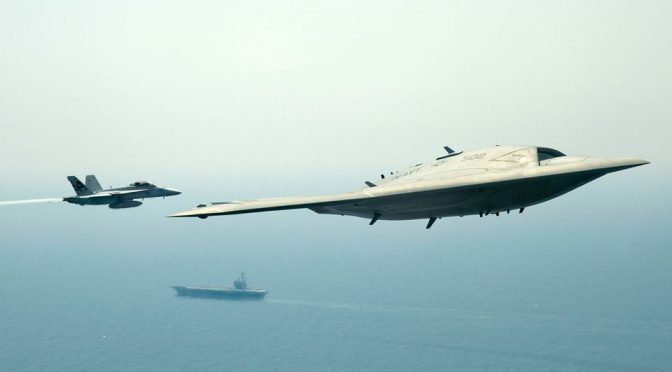 With that in mind, the Center for International Maritime Security and the Atlantic Council’s Art of the Future Project are pleased to announce the winner of their crowd-sourced creative contest exploring the future of artificial intelligence and naval warfare: “The JAGMAN Cometh” by Tim McGeehan. The runner-up entry from five selected finalists was “Cod Squad” by Hal Wilson.

The contest supplied creative cues that ranged from an excerpt of Patrick O’Brian’s The Ionian Mission and the Defense Science Board’s recent report on autonomy. See the contest guidelines and cues here.

Judging for the contest was conducted blind and in two rounds, with the first round carried out by Sally DeBoer, President of CIMSEC; James Hasik, a nonresident Senior Fellow at the Atlantic Council; and Claude Berube, an instructor at the U.S. Naval Academy and author of the Connor Stark series of novels. The preliminary judges submitted their top choices for a final round of judging by Art of the Future Project director August Cole and Peter Singer, co-authors of Ghost Fleet: A Novel of the Next World War, and Larry Bond, co-author with Tom Clancy of Red Storm Rising and the author of numerous bestsellers, including this year’s Red Phoenix Burning and Fatal Thunder: A Jerry Mitchell Novel.

McGeehan’s story “The JAGMAN Cometh” is told not as a rip-roaring tale of daring sailors whose battle buddies are sentient machines who together prevail over a dogged adversary. It’s a memo with the subject line “COMMAND INVESTIGATION TO INQUIRE INTO CIRCUMSTANCES SURROUNDING THE ENGAGEMENT OF CIVILIAN MEDICAL FACILITY IN SITE ALPHA ON 29 MARCH 2025,” and an incredibly insightful one, at that.

But it’s not just a memo and that is why the final judges were unanimous in selecting it as the winner.

“The JAGMAN Cometh” is rooted in bureaucratic reality of the difficulty of understanding the limits of human and machine working together. Rather than this dispassionate analysis being a liability in laying out the legal, business, and operational pitfalls ahead for the U.S. military, Graham somehow has turned this into a narrative strength. Authenticity, in form and detail of the possibility of human failings upsetting highly complex systems, make the story engaging and unsettling at the same time. The real-world relevance of the “human in the loop” or “human on the loop” conversation about autonomous systems is rendered with clarity.

“I loved the risky and difficult form of setting it in a report like that, which it pulls off,” said Singer, who also wrote Wired For War on the future of robots and conflict. “It tells a vivid story in what should be a boring format, while also capturing well looming dilemmas in the use of autonomous robotics and sensors. I can definitely see this happening in the real world, as well as the story being used as a teaching tool in future courses.”

That could apply to any of the finalist entries, for all their future-minded narrative exploration. But McGeehan’s entry is especially sharp in its accounting from the year 2025 of how a U.S. Navy MQ-30C Snakehead drone’s mission went awry with the aircraft on its own killing civilians while in pursuit of its mission objective.

Final judge Larry Bond noted: “Having read more than a few Navy investigations and other reports, it felt authentic, and managed to maintain the narrative. I believe the author managed to explain/discuss a complex topic well. In fact, the difficulty of commanding such complex systems was part of the story.”

McGeehan’s story represented taking a creative risk by packaging an idea inside of an official-looking format. But in his case it paid off. McGeehan will also receive a $500 grand prize.

The contest’s runner-up entry was “The Cod Squad” by Hal Wilson. Wilson, who was a finalist in the Art of the Future Project’s contest exploring Third Offset technologies, put the reader at sea aboard a makeshift naval force that is a brilliant mash-up of cutting edge and barely seaworthy. Hewing to the call to explore the essence of command aboard a ship with AI, Wilson’s rendering of the yo-yoing confidence and doubt between human and machine rings true. Being battle tested is a trial warriors have sought ought for literally thousands of years. In the machine-learning age, it has an altogether different context that the story ably draws out.

“The story did an excellent job of creating and maintaining a naval atmosphere. The author relied on current or near-term hardware for the British side, and Chinese UUVs and USVs that could be the next generation in drone technology,” said Bond. “The author’s description of the engagement was good, and showed the AI as a powerful interface between the human commanders and their weapons and sensors.”

Wilson will receive a $250 prize as the runner up.

The rest of the five finalists included “A Dead Man’s Promise” by past Art of the Future contest finalist and winner Alec Meden, “Fitness Function” by Mark Jacobsen, and “Cake by the Ocean” by Sydney Freedberg. Read the stories at CIMSEC.

August Cole directs the Art of the Future Project at the Atlantic Council’s Brent Scowcroft Center on International Security. He is a non-resident fellow at the Modern War Institute at West Point. He is also writer-in-residence at Avascent, an independent strategy and management consulting firm. A former reporter for the Wall Street Journal, he is the co-author with Peter W. Singer of Ghost Fleet: A Novel of the Next World War.